Japan’s legendary alternative punk rock band Shonen Knife released their latest album Sweet Candy Power in June. It is their 21st studio album featuring ten songs including the title track’s latest video. Formed in 1981, the current line up comprises of sisters Naoko Yamano (Vocals, Guitar), Atsuko Yamano (Bass, Vocal), and Risa Kawano (Drums, Vocals) who are traveling the U.S., Australia, and New Zealand in 32 cities to promote the album. Kurt Coban became a fan of the band and invited them to open for Nirvana back in 1991 with the release of Nevermind, touring the UK on nine shows.

Shonen Knife originated in Osaka, Japan and are named after the brand of the pocket knife that Naoko had found one day. Her inspiration to form the band came from legendary artists the Beatles, The Ramones, Buzzcocks, etc.  In 1983, their first album Burning Farm was released on Zero Records. The original sound gained popularity in the United States, Britain and Europe, making its major debut in 1992. They continued to release music and toured constantly world wide. The band has been credited with making “the international pop underground more international” by “opening it up to bands from Japan”. They have also performed as a Ramones tribute band under the name The Osaka Ramones.

Shonen Knife are currently on their North American Tour through September 2019, and will continue onto Australia and New Zealand in October. Visit their website here.

For tour dates and to purchase tickets, go to: www.songkick.com/artists/-shonen-knife. 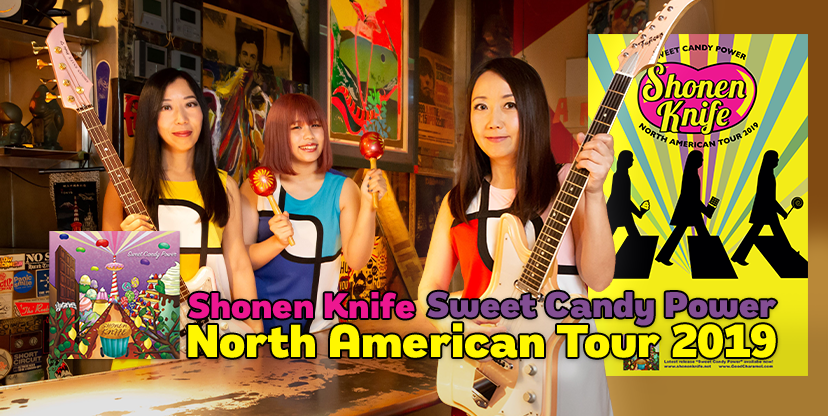