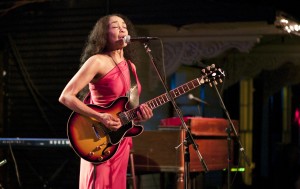 Born Peggy Tiese Jones in Eden, Md., on July 19, 1940, and raised in uptown Manhattan, she was a child prodigy who at the tender age of three already exhibited an innate feel for rhythm and movement, as well as musical pitch and timing.

Encouraged by her musical parents (her mother was a singer and dancer, and her father played trumpet and sax), Peggy became a professional tap-dancer at the age of 6, appearing at Carnegie Hall and on TV shows, and also studied ballet, toe and modern dance.

Gifted with a stunning four-octave singing voice, she received formal operatic training at age 9. At age 12, she learned to play her first instrument – the ukulele – and started writing her own songs. Peggy was educated at Stitt Junior High and the High School of Performing Arts, where she majored in dance, studied drama and music theory, and learned to play several more instruments including keyboards, bass and drums. After graduating in 1956, she found work as a big band vocalist and part-time model, and was planning to go to the prestigious Juilliard School to study classical music theory, but a chance encounter changed the course of her life forever.

With rock ’n’ roll taking the country by storm, Peggy had recently bought herself an electric guitar. One day, she was walking down 125th Street carrying her instrument and was approached by a large black man in a head rag and sunglasses who asked her if she could play it. She replied truthfully: “Not yet.” “Well, let me know when you can,” came the reply. “I’m Bo Diddley.”

Incredulous at first that one of the top R&B stars in the country would make her such an offer, Peggy worked on her guitar technique and picked up tips from Diddley whenever he was in town. In between, she also worked as a nightclub singer and recorded with The Continentals, The Bop-Chords and Gregory Carroll (as “Greg & Peg”). She began sitting in on Bo Diddley’s sessions from early 1957 and went out on the road with him as a fully fledged band member in 1958.

Peggy’s impact was immediate – not just on stage, where audiences were astonished to see a female lead guitar player, but also musically. Her influence is immediately apparent on hits like “Say Man” and “Road Runner” and the album tracks they recorded together: not just the inventive guitar accompaniments (she could play in play in Diddley’s unusual open-tuning style, as well as in regular tuning), but also the backing vocals, arrangements and an overall broadening-out of repertoire. It was no accident that the next four years were arguably Diddley’s most successful, from an artistic as well as commercial standpoint.

In 1961, Peggy had to take temporary leave of absence to care for her sick mother and younger sisters back in New York City. She never returned. Her place in the band – and in history – was taken by another girl guitarist, Norma-Jean Wofford a.k.a. “Duchess.” Constrained by family responsibilities and unable to travel, Peggy did her best to earn a living performing in local clubs and playing on a handful of recording sessions (most notably the memorable guitar lead on Les Cooper’s 1962 instrumental hit, “Wiggle Wobble”). In the mid-‘60s, she formed her own group, The Jewels, who quickly established a reputation as one of the hottest outfits on the East Coast. In 1966, they scored a regional hit with their revamp of the standard, “I’m Forever Blowing Bubbles,” but by this time relationships within the band were becoming strained and Peggy quit shortly after to join The King’s Paupers as “Little Jewel.” She also did more session work, assisting recording pioneer Gary Kellgren with percussion and sound effects on the Animals’ “Winds Of Change” album, and sitting in with Curtis Knight & The Squires whenever their regular guitarist, Jimi Hendrix, couldn’t make it. Overall, however, the ’60s proved to be a period of frustration and disappointment period for Peggy, who felt – with some justification – that events had conspired to prevent her from achieving her full potential.

Happily, life took a significant turn for the better after she met bass player Wally Malone. They married in 1968 and both joined American Soul Train (a.k.a. the legendary Boogie Kings), based out of Lake Charles, Louisiana. After touring the South with them for six months, the Malones relocated to California in 1969, initially to San Jose, then to Boulder Creek, up in the Santa Cruz Mountains. There, they formed a trio called The Family Jewel and from then on worked mainly on the West Coast, as well as quite a few engagements on the East Coast, many of them in Boston.

In July 1970, Peggy spotted that Bo Diddley was due to appear at the Fillmore West auditorium in San Francisco and decided to pay him a surprise visit. After an emotional reunion, Bo invited her to join him onstage and by all accounts played one of the best shows of his career. Even though ten years had elapsed, the old magic was still there. The crowd were so excited to see them back together that they started chanting “Lady Bo, Lady Bo,” and Diddley duly rechristened her on the spot.

Peggy and Bo stayed in touch, and she and her band would regularly back him during the ’70s and ’80s whenever he played on the West Coast. They also cut some new, funk-styled material together in 1978, and some of the material was later included – uncredited – on Diddley’s 1984 “comeback” album, “Ain’t It Good To Be Free.” When not working with Bo, Peggy played various clubs and festivals with different permutations of her group – Lady Bo & The Family Jewel, the Lady Bo Trio, and Lady Bo & The BC Horns – as the occasion demanded. She also made a fleeting appearance in the 1987 movie, “The Lost Boys,” playing in the boardwalk band.

Peggy’s dedication as a musician and guitarist was second to none. Influenced by George Benson, Kenny Burrell, Grant Green, Jimi Hendrix, Wes Montgomery, Charlie Parker, Django Reinhardt and, of course, Bo Diddley, she was constantly exploring new techniques, effects and sounds. She was equally willing to embrace new technologies such as the Roland guitar synthesizer, and explore the possibilities they offered.

She received a Lifetime Achievement Award in 1993 at the South Bay Blues Awards, and a US Congressional Lifetime Achievement Award in 2003. That same year, she was acknowledged as a Music Legend at the California Music Awards, and was also inducted into the West Coast Blues Hall Of Fame. In 2012, Peggy and Wally were both inducted into the Louisiana Hall of Fame, along with all the other Boogie Kings.

Peggy had been in poor health for several years and was recently diagnosed with cancer. She passed away peacefully at her home in Boulder Creek, Calif., on Wednesday, September 16. She leaves behind husband Wally, sisters Patricia and Patrina Jones, and nieces Alexandria, Vanessa and Amber Stewart and Yyana Jones. 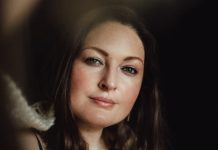