The 80s Cruise will sail in 2019 with all original members of iconic 80’s synth-pop/rock band Berlin – Terri Nunn, John Crawford, David Diamond and Ric Olsen – onstage together again performing a full concert for the first time since 1985. Along with keyboardist Dave Schulz, guitarist Carlton Bost and drummer Chris Olivas, the reunited Berlin will mark their 40th anniversary with two concerts on board the cruise, performing Berlin classics such as “Metro,” “No More Words,” “Take My Breath Away” and “Masquerade,” as well as songs from Berlin’s upcoming new studio album, TranscenDANCE, scheduled for release in early 2019.

“The 80s Cruise is such a blast,” says Terri Nunn, “It’s a non-stop party and it’s going to be even bigger, louder and more radical than ever when our entire band – past and present – takes the stage next year.”

The 80s Cruise will rock with awesome activities and excellent events all day. Big hair and big shoulders will rule theme nights including “Enchantment Under The Sea” prom night, Back To The 80s Night, the fan favorite Neon Beach Party and an all-new “Nightmare on The 80s Cruise” celebrating iconic 80s horror movie characters Freddy, Jason, Chucky, Gremlins, and more set to music from “Thriller” and “Ghostbusters.”

The cruise takes place aboard the modern Celebrity Infinity, with extraordinary service, exceptional dining featuring menus crafted by a James Beard award-winning chef, elegant rooms and the Canyon Ranch SpaClub, the most luxurious spa club at sea. Cabin rates for The 80s Cruise begin at $2,100 per person and include all concerts, activities and events on board the cruise, gourmet and casual fare meals, 24-hour room service, port charges, taxes and onboard gratuities. Further information can be found at www.the80scruise.com or by calling (844) 384-8080. 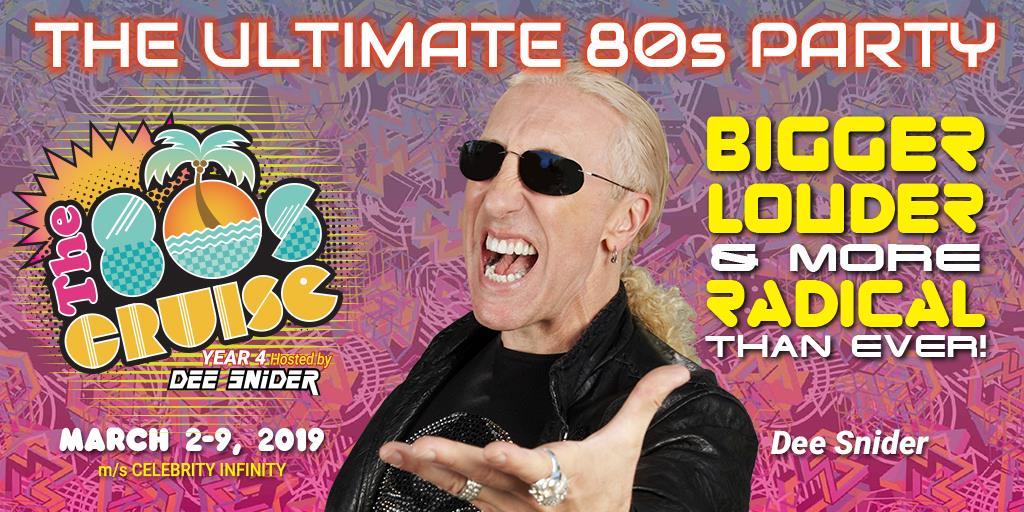