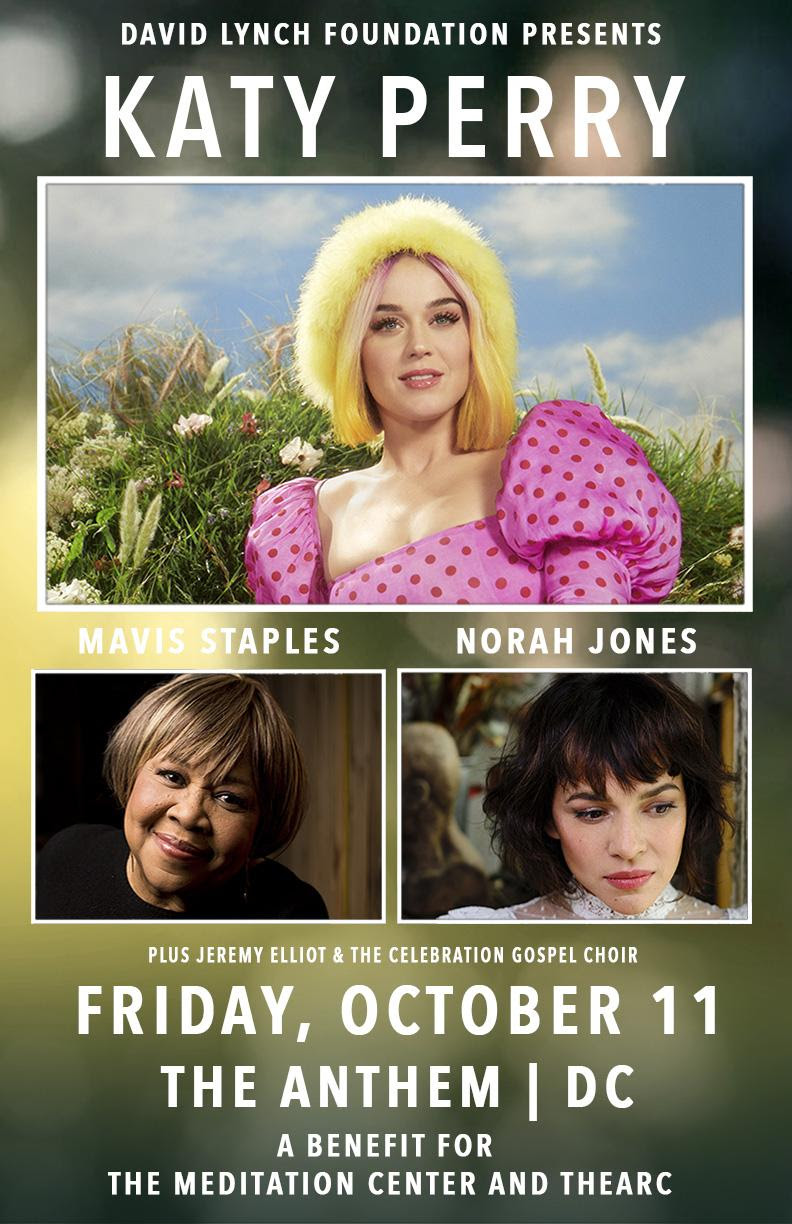 Headlined by Katy Perry, Norah Jones, and Mavis Staples, The David Lynch Foundation will be hosting their extraordinary “Silence the Violence” benefit concert in Washington, D.C. onOctober 11 to benefit 10,000 at-risk youth in the district. PRESS HERE for tickets.

“I have been practicing TM for over nine years, and it has changed my life,” says Katy Perry. “It is one of the most important tools I use to keep me balanced and creative with a positive mindset. I am so proud to give an intimate performance at the ‘Silence the Violence’ benefit concert at The Anthem on October 11 to raise funds to bring the power of meditation to 10,000 D.C.-area young people.”

Proceeds from the evening – which will also showcase the talents of the Celebration Gospel Choir, Jeremy Elliot, and more – will be used to bring the evidence-based Transcendental Meditation technique to vulnerable communities in the District through in-school and after school programs, churches and community centers, recovery programs, and detention centers in partnership with THEARC (Town Hall Education Arts Recreation Campus). Previous research has shown that TM reduces stress, heals PTSD, lowers substance abuse, improves academic performance and graduation rates, and reduces arrests for violent crime.

For more information please visit: www.davidlynchfoundation.org. You can also purchase tickets from The Anthem box office at www.theanthemdc.com or by calling them directly on (202) 888-0200.

About The David Lynch Foundation (DLF):
Since 2005, the David Lynch Foundation, a 501(c)(3) non-profit organization, has helped to bring the stress-reducing Transcendental Meditation technique to more than 1 million children and adults around the world. They focus their efforts on underserved inner-city students; veterans with PTSD and their families; and women and children who are survivors of violence and abuse. In addition, DLF funds independent research to assess the effects of the program on academic performance, ADHD and other learning disorders, anxiety, depression, substance abuse, cardiovascular disease, post-traumatic stress disorder, and diabetes.