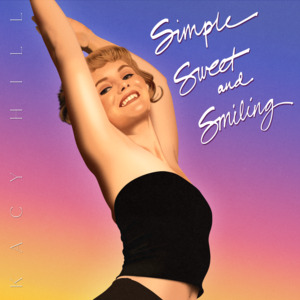 Simple, Sweet, and Smiling, the new album from celebrated vocalist and songwriter Kacy Hill, is now out —listen here.

Simple, Sweet, and Smiling features previously released tracks “Easy Going” and “Seasons Bloom,” co-written and produced with John Carroll Kirby (Frank Ocean, Solange), Ariel Rechtshaid (Adele, Vampire Weekend, Charli XCX) and Jim-E Stack (Caroline Polachek,   HAIM, Dominic Fike), which Nylon calls, “a sweet love song for the last of summer.”
Made throughout quarantine mostly on her own, Simple, Sweet, and Smiling marks an entirely new way of creating for Hill. Whereas she previously made music during scheduled sessions at studios, lockdown inspired her to build a simple recording setup at home and work when she was inspired, often recording vocals first thing in the morning after waking up. The album was made mostly with Jim-E Stack and a few close friends, notably John Carroll Kirby and Ariel Rechtshaid.

Just as Hill was beginning the writing and recording progress, her father suffered and survived a major heart attack, sending her to her hometown to visit him as much as possible. At the same time, the agoraphobic panic disorder she has struggled with since childhood made a significant recurrence. The album is a document of Hill working through her feelings of powerlessness in the face of her own mind and mortality, a real-time exploration of the realities we’re all faced with as we enter adulthood, as well as a collection of love letters and thank you notes to partners, friends and family. In that way, the title, Simple, Sweet, and Smiling, has many meanings—it’s genuinely aspirational; an acknowledgement of gratefulness for those moments in which clarity briefly breaks through mental anguish; and a tongue-in-cheek admission of something which for many of us never quite feels possible.

Furthermore, Hill will tour the U.S. this fall—her first ever headline tour and first live dates since 2018, with dates including New York’s Mercury Lounge, Los Angeles’ Moroccan Lounge and more. Tickets are on sale now at kacyhill.com.

Born and raised in Phoenix and now living in Los Angeles, Hill got her start in 2014 when her self-released single “Experience,” the second song Hill had ever recorded, started attracting attention online. After touring with Kanye West and Vanessa Beecroft as part of the cast of the YEEZUS tour, Hill signed to West’s imprint G.O.O.D. Music. Her debut EP Bloo came shortly thereafter, and she’s since released two albums: 2017’s Like A Woman and 2020’s independently issued Is It Selfish If We Talk About Me Again. Throughout her career, Hill has collaborated and shared stages with Travis Scott, Kid Cudi, Bon Iver, Francis and the Lights, Cashmere Cat and countless others.