Joss Stone Releases New Official Video For “What Christmas Means To Me” From Merry Christmas, Love

Grammy award-winning singer and songwriter Joss Stone’s new whimsical visual for her rendition of the spirited Stevie Wonder classic “What Christmas Means To Me” is out now. The video comes ahead of the singer’s busy Holiday season as she gears up to promote her debut Christmas album Merry Christmas, Love which was released in September via S-Curve/Hollywood Records. The album is available on all streaming platforms and CD. Vinyl has released on November 11th.

Directed by Bill Fishman (Decemberists, Counting Crows) and Seth Christian, the video for “What Christmas Means To Me” finds Joss adorned in dazzling holiday regalia and cheer, performing at the hippest holiday party in town. Brimming with the joy of family, Joss was pregnant at the time of filming and her infant daughter Violet was on set. Now the mother of two, Joss has more to celebrate this holiday season than ever before. 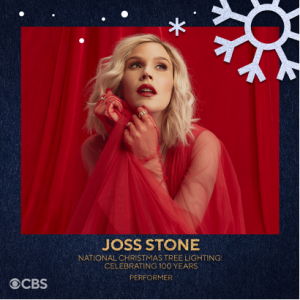 The video launches in advance of upcoming performances on major televised Holiday specials. She will first perform at the Macy’s Thanksgiving Parade®, which airs nationwide in the U.S. on NBC and streams on Peacock, on Thursday, November 24, 2022, from 9 a.m.- noon; in all time zones.

Joss then returns to Nashville – her current hometown and the city where Merry Christmas, Love was recorded – for her debut performance at The world famous Grand Ole Opry in Nashville – on Saturday December 10th.

On the video, Joss says “I loved recording this album, especially this song as it really brought the Christmas spirit and turned it up. The video was great fun, more so because my baby girl and boy were right there with me. What a delight! And how festive. Can’t believe how lucky I am at this time in my life.” Inspired by the likes of Frank Sinatra, Nat King Cole, Bing Crosby and Michael Buble, Merry Christmas, Love celebrates the holiday season with fifteen classic Christmas tracks including favorites such as “Let It Snow”, “Jingle Bells”, “Silent Night” and more, plus two new original songs written by Joss, “If You Believe” and “Bring On Christmas Day” – a track celebrating her lifetime love for the joyful holiday.

Merry Christmas, Love represents a lifelong love of Christmas music, and a quest to present the music in a timeless but authentic way. “It was ambitious to do this, but it was such a joy to make my dream project come true,” Joss enthuses.

Nearly two decades ago, Joss exploded on the music scene with her platinum-selling, breakout debut The Soul Sessions (also on S-Curve). Since then, she has won a Grammy (plus four additional nominations), released two platinum-certified albums, collaborated with everyone from Mick Jagger and Smokey Robinson to Raphael Saadiq and The Roots, and many more. Joss recently won The Masked Singer UK in 2021 and celebrated the ten year anniversary for Soul Sessions Vol. 2 this past July.