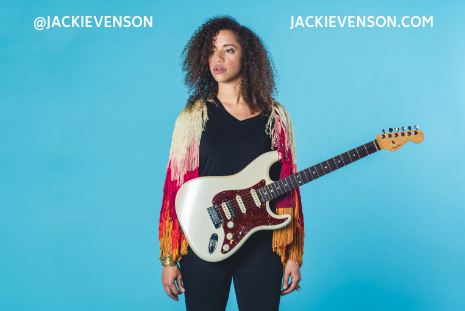 Austin-born, idiosyncratic singer-songwriter Jackie Venson releases her single, “Joy”, the title track from her new album due out on April 5, 2019. Forbes just named her one of “15 Women-Fronted Musical Acts Getting Their Due At SXSW 2019”, alongside Billie Eilish. She has been named “Best Guitarist” in the Austin Music Awards, and is the third woman in 37 years, as well as the first African American woman to do so.

“Jackie Venson continues to morph into a soul’d up St. Vincent and we couldn’t be more excited for it….thrilling guitar work and powerful vocals with booming synths and both electronic and live drums.” says OVRLD.

The track and album follow up an exciting 2018, during which Venson released several singles to rave reviews from a number of well-regarded publications including AfroPunk, Grammy.com, EARMILK, NPR Music, She Shreds Magazine and Vintage Guitar Magazine. She has already supported the likes of Aloe Blacc, Curtis Harding, TV on the Radio, Gary Clark Jr and Earth, Wind, and Fire to name a few, as well as performing at a plethora of prestigious festivals including Austin City Limits, SXSW, John Coltrane International Jazz and Blues Festival and Open Air Blues Festival.