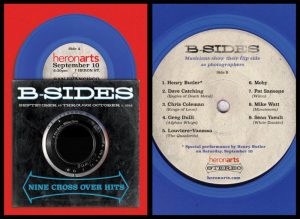 Heron Arts is pleased to present B­-Sides, a group show curated by Sean Yseult (White Zombie) of nine photographers who usually can be found in the recording studio instead of the dark room.

Each artist was chosen based upon their bizarre, beautiful or unexpected photography. Purposefully avoiding life on the road or backstage rock shots, the photos are meant to show the other side of the musician­ – the “B-­side.” Exhibiting artists include: Sean Yseult (White Zombie), Moby, Dave Catching (Eagles of Death Metal), Mike Watt (Minutemen & The Stooges), Greg Dulli (Afghan Whigs), Pat Sansone (Wilco), Henry Butler, and Louviere+Vanessa (The Quaalords).

Each musician tells a story through their work. Sean Yseult depicts a secret society party in 1870s New Orleans that turns from decadent to deadly – based partly on research and fact coupled with a dash of fiction. Dave Catching depicts haunting beauty in his black and white photos, capturing images lost in time, from Jerusalem to Joshua Tree.

Chris Coleman uses texture and nature to play tricks on the eye, glittering pavement turning into a starry night. Punk legend Mike Watt captures the surreal in photographing his hometown of San Pedro, somehow making a beautiful day on the water look like a post­-apocalyptic meltdown.

Greg Dulli similarly makes the everyday appear surreal in every shot, capturing some very unexpected moments. Pat Sansone exposes the sleepy south beautifully with his polaroid, like a Wilco soundtrack. Moby’s work depicts the isolation and alienation that arise from spending years in lifeless and anonymous spaces.

Legendary blues pianist Henry Butler captures typical Louisiana subjects – Mardi Gras and the swamps – in the most atypical way, where he has turned being a blind photographer into a plus. Also from New Orleans, photo duo Louviere+Vanessa not only play in bands, but have created an entire show based on photographing music.

Find out more at heronarts.com/exhibition/b-sides.