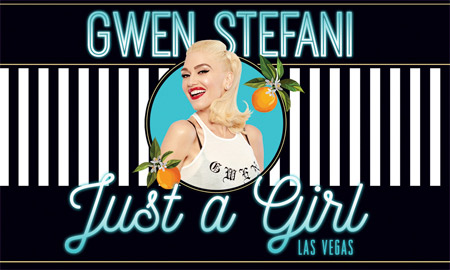 Gwen Stefani opened her “Just A Girl” Vegas residency at the Zappos Theatre at Planet Hollywood on June 27th, and there was no shortage of glamour – or glitter. The pop superstar kicked off the 25-show residency in high style, with a rendition of “Hollaback Girl” replete with vintage Vegas grandeur – showgirls included.

And indeed, nostalgia is an integral – and purposeful – component of the show as a whole. “Just A Girl” pays homage to the artistic journey Stefani has taken over the course of her illustrious career, as well as to the fans who have stood by her since she and No Doubt exploded onto the music scene in the 1990s. With this show, Stefani is, as she told Entertainment Tonight, “bringing people through the long journey I’ve been on with music and sharing that and exchanging the love I have with people. It’s really just that same journey again, but in a new Vegas-y way.”

Stefani is true to her word. She plays all the hits, from the show’s title song and a jaw-dropping version of “Don’t Speak” to her later solo singles such as “The Sweet Escape,” and even throws in a few dear-to-her-heart covers. While the stage production is spectacular, it never overshadows the music, nor Stefani herself, who sings live throughout the entire show (a fact which in itself is remarkable, in today’s vocal-track world.)

Gwen Stefani’s “Just A Girl” residency continues through select dates in July and December of this year, as well as February and March of 2019. You can see a full list of dates and buy tickets here.