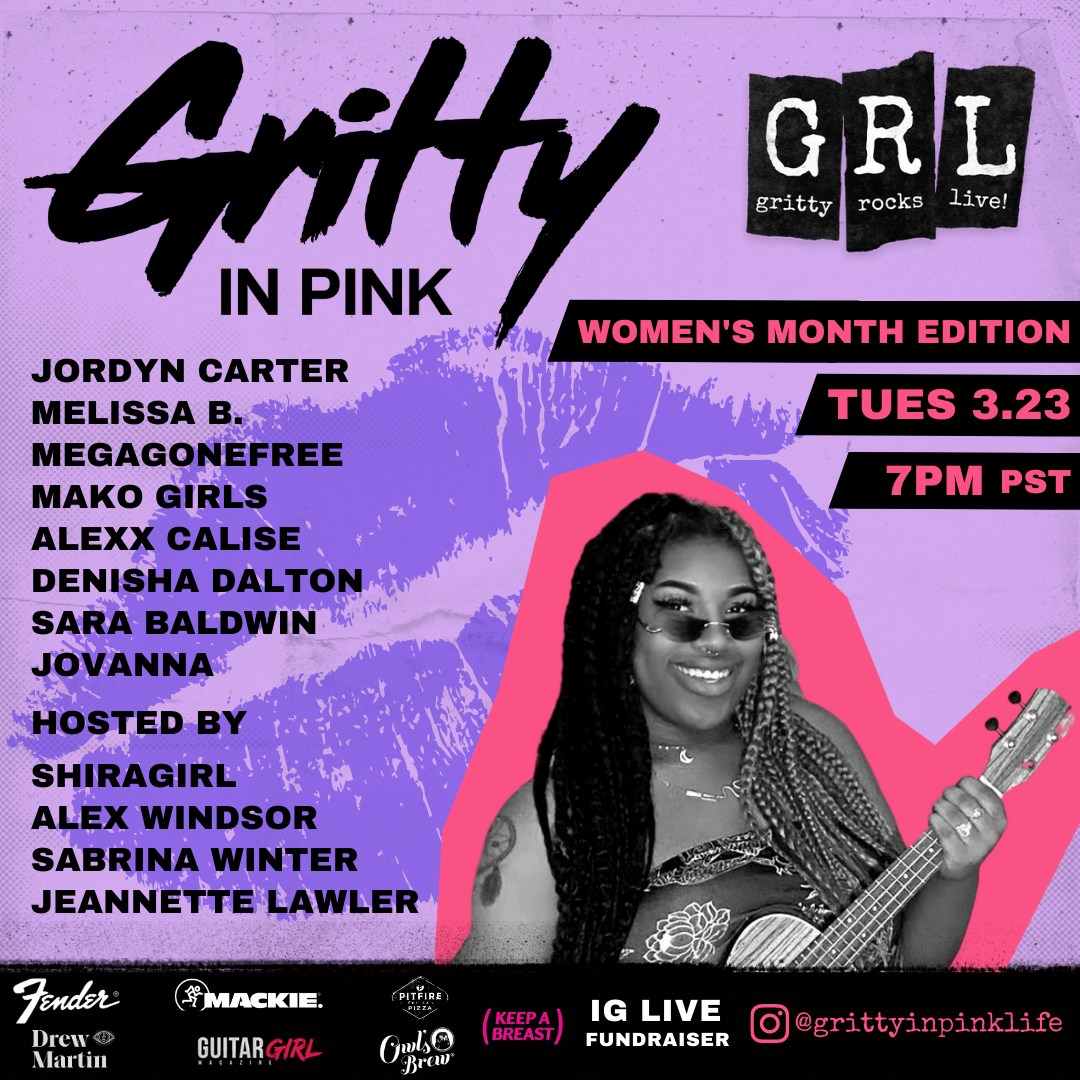 Gritty In Pink hosted another high energy, female-centric livestream on March 23, 2021 wrapping up their live programming for Women’s History Month. This Instagram (IG) Live event was also a live fundraiser, raising hundreds of dollars for Keep A Breast Foundation. The latest installment of Gritty Rocks Live is now featured on Gritty In Pink’s IGTV (via Instagram). Featured artists include Jordyn Carter, Melissa B, TikTok star MegaGoneFree, MAKO Girls, Alexx Calise, Sara Baldwin, JOVANNA and Denisha Dalton, who is a contestant on NBC’s The Voice this season.

The show was hosted by Gritty In Pink founder Shiragirl, with house band musicians Alex Windsor, Sabrina Winter and Jeannette Lawler. Shiragirl opened the show with an unexpected pop-punk cover of Billie Eilish’s “everything i wanted,” then sat down and chatted with Jordyn Carter, a young emerging rapper from the Bay Area about her journey as an artist. Carter also performed her hard-hitting anthem “Kopy Kat” and announced the release of her upcoming single “Four 13”, which is set for release on her 19th birthday, April 13th.

The rest of the evening was filled with stunning performances and memorable
conversations from all of the artists, including a deep discussion with Melissa B about
the need for increased female representation in the music industry. MegaGoneFree
talked with Gritty about her rise on TikTok, as well as the plans for her debut EP. The
young sister group MAKO Girls gave an electric dance performance of their single
“Leverage.” Alexx Calise presented a stripped-down version of her song “Break Me.”
Denisha Dalton shared about her experience on The Voice thus far, and from her blind audition the audience learned why she chose John Legend to be her coach over Kelly Clarkson. JOVANNA closed out the show with a powerful and moving performance of “Anyone” by Demi Lovato.

The show was sponsored by Guitar Girl Magazine, Mackie, Pitfire Pizza, Drew Martin, Fender, and Owl’s Brew, who partnered with Gritty In Pink to give away some Owl’s Brew Mixers to the top donors during the livestream.  The next Gritty Rocks Live performance titled Spring Fling, is scheduled for Tuesday, April 6, 2021.

Keep A Breast is a nonprofit organization with the mission to empower young people
around the world with breast health education and support.