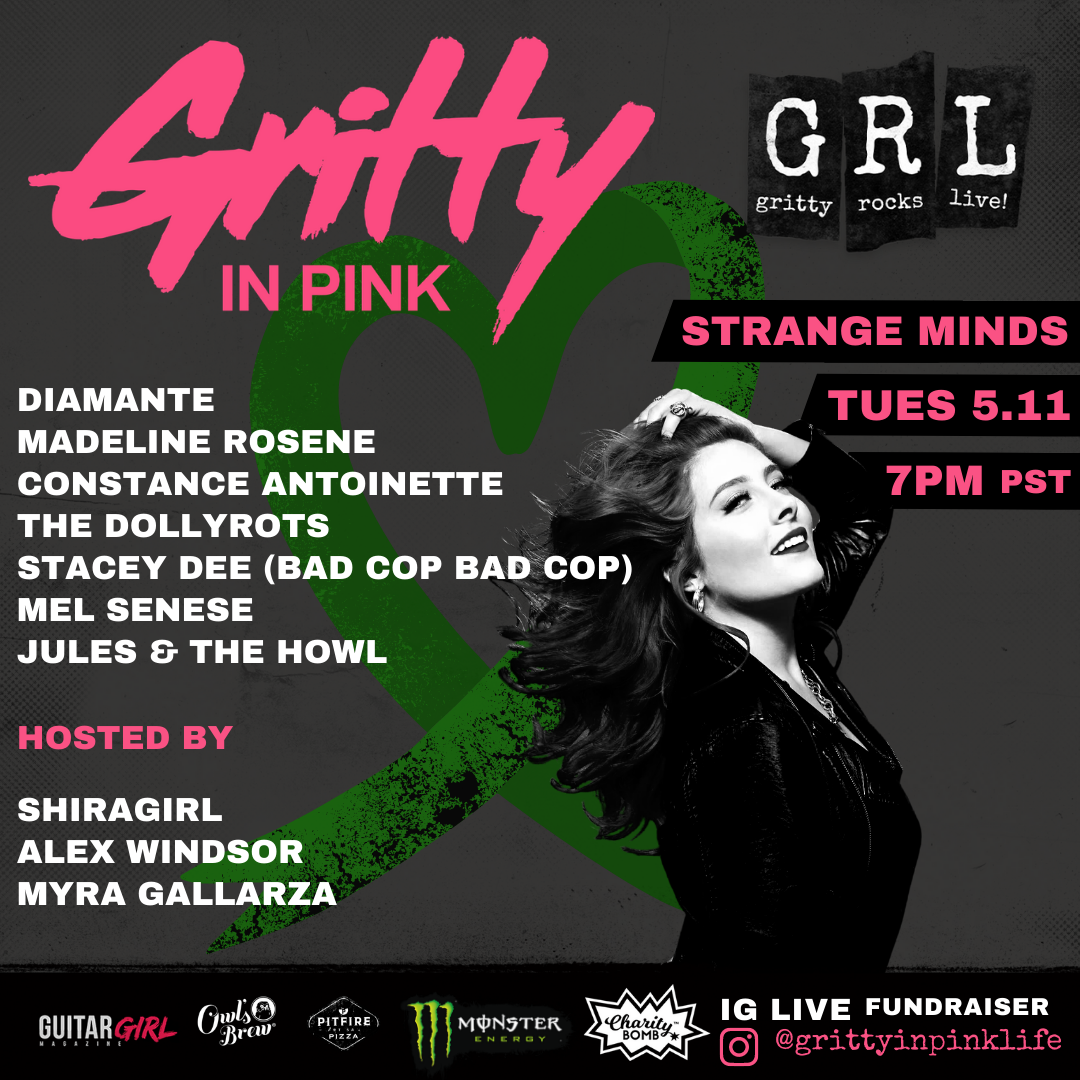 This May, Gritty In Pink is partnering with Charity Bomb, whose Operation GenZEQ combats mental illness among our youth. Gritty In Pink continues to highlight female voices and call action to important issues, including America’s mental health crisis, which is a burgeoning crisis as we emerge from the pandemic. The first installment of programming for Mental Health Awareness Month, benefiting Charity Bomb’s Operation GENzEQ, will be on 5/11 at 7 p.m. PST/10 p.m. EST on @grittyinpinklife Instagram Live. This show is graciously sponsored by Monster Energy, as well as supporting partners Owl’s Brew, Pitfire Pizza and Guitar Girl Magazine.

Gritty In Pink is looking forward to chatting with numerous mental health advocates on its lineup. The show will feature rocker Diamante who has a new album out May 7, punk activist Stacey Dee of Bad Cop Bad Cop and Sidewalk Project, pop-punk mom Kelly Ogden of The Dollyrots, singer/songwriter Madeline Rosene, metal shredder Constance Antoinette, Chicago alt pop artist Mel Senese, soul rock crooner Jules & the Howl, and will be hosted by Shiragirl with house band guitarist Alex Nicole Windsor and drummer Myra Gallarza. Operation GENzEQ is creating an entertaining and engaging EQ/SEL educational platform (created by the industry’s top experts) that will provide Gen Z with the emotional tools they need in order to thrive. Matthew Leone, founder Charity Bomb, says, “Charity Bomb are wholly impressed with what the Gritty crew has achieved in a short timeframe and we are lucky to align with such a strong and like-minded brand at this critical time in the world for our mental wellness work.”

The second installment of Gritty In Pink’s Mental Health Awareness Month Instagram Live Fundraisers will be later this May on 5/20 for MTV’s Mental Health Action Day. Appearances will include Talinda Bennington, founder of 320 Foundation, Eva Gardner, bassist for P!nk, indie-pop star Lesibu Grand, soulful songstress Rozzi and rising TikTok star Kelsey Bou. Be sure to keep an eye out on Gritty In Pink’s Instagram to watch the rest of this show’s lineup unfold.

Gritty in Pink is a new platform empowering women in music through performance,
partnerships, and networking opportunities. Founder Shira Yevin has a legendary
history of breaking down barriers and carving out a space for women, as the creator of
the Vans Warped Tour Shiragirl Stage, which featured 300+ female musicians, including
Joan Jett and Paramore. Gritty in Pink continues that legacy of providing community
and a stage for female voices in a male-dominated industry, having showcased 175+
artists with a collective IG following of over 2.6 Million.

Charity Bomb is an unconventional, solutions-based 501c3 that aims to reverse the
trends of mental illness and its symptoms, including anxiety, depression, and suicide,
among our youth. We aim to achieve this by creating an exciting and engaging social
and emotional learning educational platform that integrates methods of curriculum
(scientifically, proven to be effective) into these activities. Follow @charitybomborg on
Instagram, and visit their website for more info. 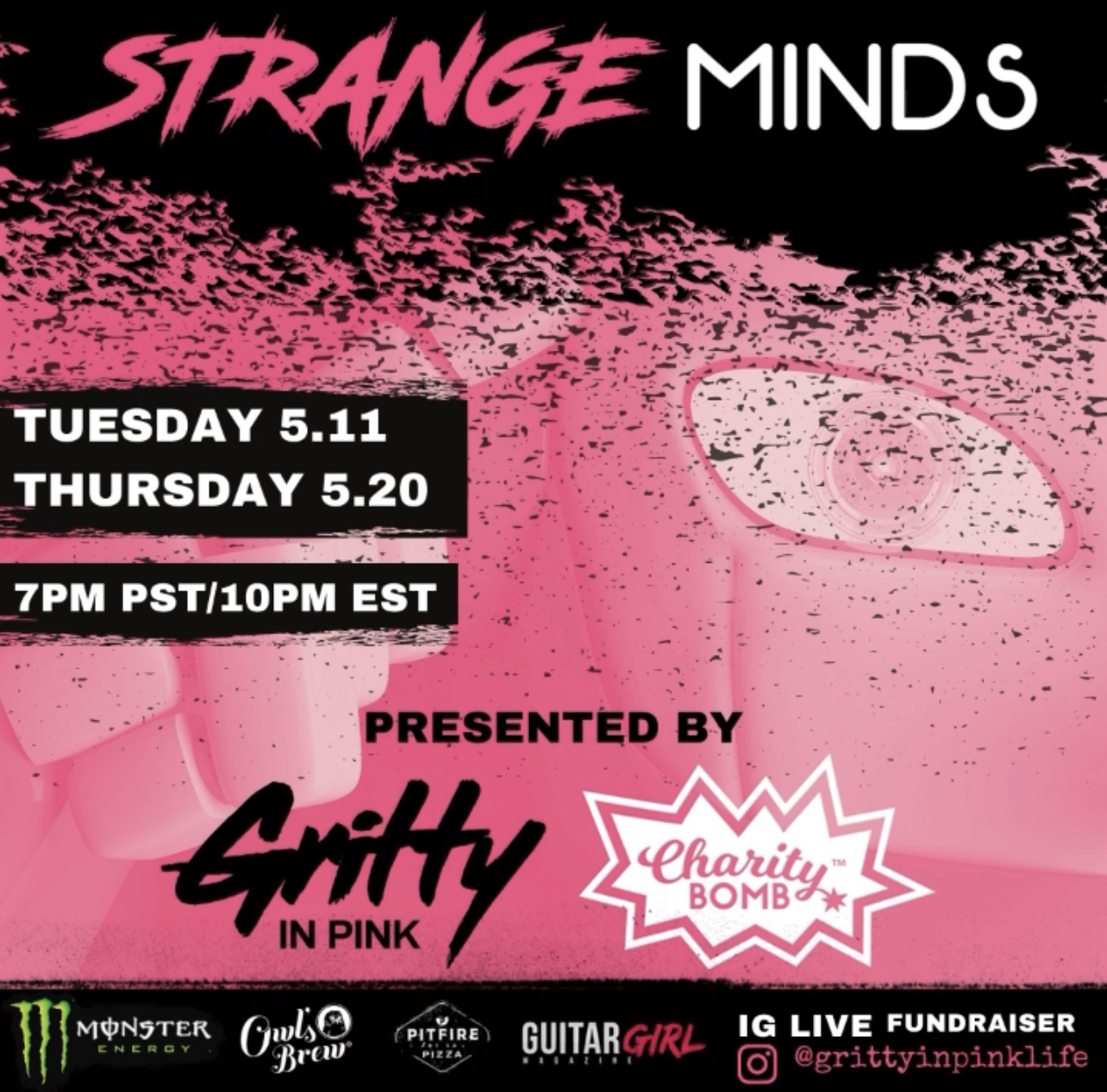