Women-led platform heralds the return of the legendary music trade show with an acoustic hotel suite soiree, presented by Mackie.

Last month in Anaheim, California (U.S.), Gritty In Pink made clear that the future of music is female with their invite-only NAMM event. Presented by Mackie, additional sponsors included Guitar Girl Magazine and Drew Martin. The hotel soiree was part of a handful of events that featured women at NAMM, such as the She Rocks Awards, presented by the Women’s International Music Network. Hotel party guests, prompted to sign up for the INPINK marketplace upon entry, were treated to an acoustic show, featuring artists who are all available for hire on the online marketplace! The bill consisted of Ashlynn Malia, Shanice Antonia, Shiragirl, VK Lynne, and Taylor Morse, and instrumentalists Raine Palladino, Lisa Bianco, Lex Wolfe, and Alex Windsor. DJ Lotus Banks kept the party going, as guest sipped drinks provided by beverage sponsors Jagermeister, Pabst Blue Ribbon, Cool Cat Wine, and Liquid Death.

Gritty In Pink founder, and host for the evening, Shira Yevin, kicked off the entertainment with Shanice Antonia, who reprised the All-GRL Jam favorite, Sade’s ‘Paradise,’ and brought the vibes with her original song, ‘Ring (When You’re Ready).’ Artist Ashlynn Malia, singer/songwriter and TikTok star, played a short set of intimate originals, along with a rendition of Gotye’s ‘Somebody that I used to Know.’

After that, the band Shiragirl (fronted by founder Shira Yevin) took the stage to storm through their catchy punk pop tunes ‘Dreamin,’ ‘Antisocial Media’, and ‘Wake Up Face Up.’ VK Lynne, frontwoman of The Spider Accomplice, picked up one of the acoustic guitars graciously provided for the event by Guild Guitar Co., and led a sing along to her band’s tune, ‘Oil Meets Rain.’ Then, she was joined by drummer Raine Palladino and guitarist Lisa Biancofor a cover of ‘I’m the Only One,’ by Gritty In Pink’s Strategic Advisor, Melissa Etheridge.

The show wrapped up with the joyous sounds of singer/ukulele artist, Taylor Morse, got the whole crowd singing with her cover of Fleetwood Mac’s ‘Dreams.’ Party goers were sent away with gift bags that included swag from Gritty In Pink’s sponsors, and unforgettable proof that in the music industry, it’s time to GET GRITTY! 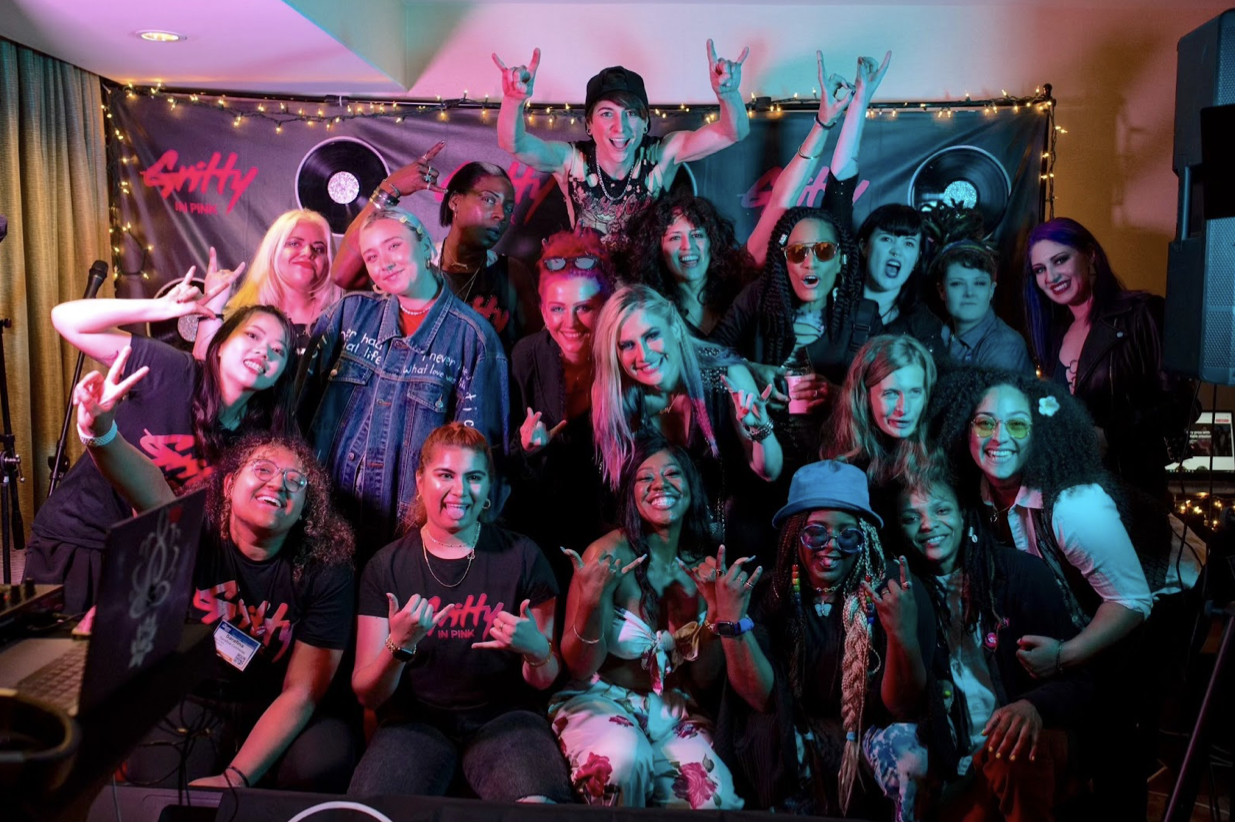