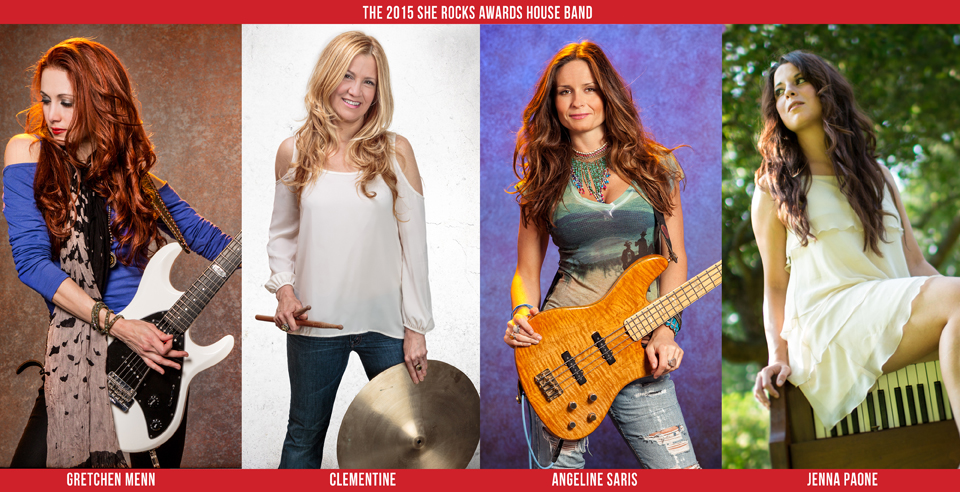 The Women’s International Music Network announced that the house band for the 2015 She Rocks Awards will be led by acclaimed guitarist Gretchen Menn, and include Zepparella members Angeline Saris on bass, Clementine on drums, and guest keyboardist Jenna Paone. The House band will back some of the guest performers and provide interstitial music for the award ceremony, held on January 23, 2015 from 6:00pm to 8:30pm at the Anaheim Hilton Hotel during the NAMM Show. Tickets on sale here.

“I am beyond thrilled to have this amazing group of performers as our house band for the 2015 She Rocks Awards,” said WiMN founder and awards co-host Laura B. Whitmore. “These powerhouse players will bring incredible energy to the event and serve our other guest performers well.”

In addition to handling drumming duties for Zepparella, Clementine has laid the groove for a variety of projects including the bands Bottom, AC/DShe and Stars Turn Me On. In 2014, Clementine released The Collection, a compilation disc of various songwriting endeavors with guitarists Gretchen Menn, Jude Gold and Justin Caucutt.

Hailing from Boston, guest keyboardist Jenna Paone just released her debut solo album Hammers and Strings in October 2014. Paone boasts 25 years of training and education in classical and contemporary piano, voice, ballet, and theater. Paone recently was selected to perform in Nashville, Tenn., as part of the She Rocks Showcase at Summer NAMM.

The 2015 She Rocks Awards will be co-hosted by platinum-selling guitarist and solo artist Orianthi and the Women’s International Music Network founder and writer/editor Laura B. Whitmore. Now in its third year, the event pays tribute to women who display leadership and stand out within the music industry, and has become a standard at the NAMM Show.

With featured performances, food and beverages, giveaways, a silent auction, networking opportunities and more, the She Rocks Awards brings together industry professionals, music icons, artists, fans, and media to celebrate women in music. A portion of the proceeds of the event will go to benefit the Girls Rock Camp Alliance.

This event has sold out for the past two years and does not require a NAMM badge to attend. The She Rocks Awards will take place on January 23, 2015 from 6:00pm to 8:30pm in the Pacific Ballroom at the Anaheim Hilton Hotel.

Purchase tickets and find out more about the She Rocks Awards at www.sherocksawards.com.