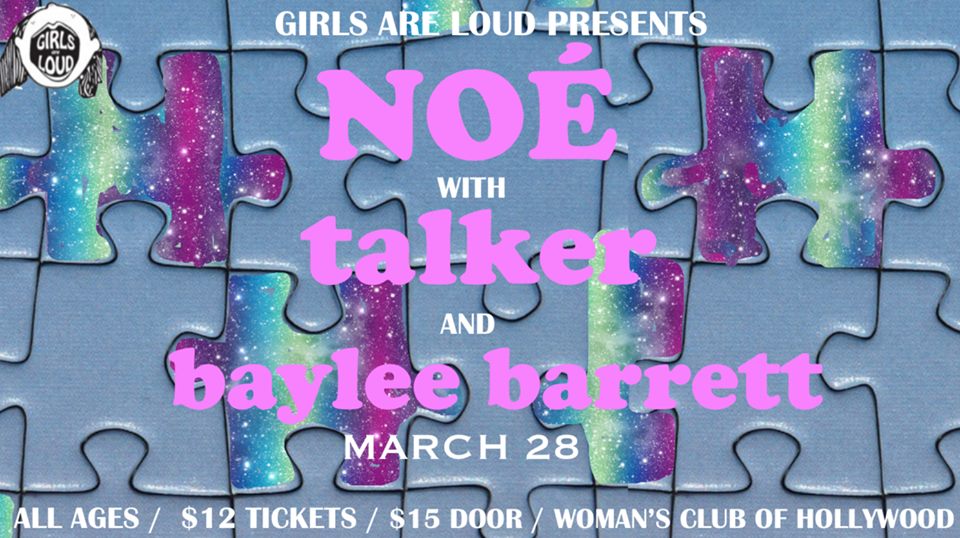 The Woman’s Club of Hollywood is proud to announce it’s collaboration with Girls are Loud with a special concert on Thursday March 28th, from 7:00-10:30pm.

Girls are Loud is a collective of female-identifying instrumentalists providing solo songwriters with the resources to record all aspects of their song live, as well as a studio in which to do so, reminiscent of the recording practices of the 60s and 70s.

In honor of International Women’s Month, artists Noé, talker and Baylee Barrett fill the bill for a GAL live show, with all proceeds going to a Girls are Loud studio session for Noé’s next single.

After her pop collaborations and impressive dance records like “Meet Me” with Mickey Valen, Noé decided to make a bold career move in 2019. This year, the artist took control of her creative destiny by releasing three singles releases along with two visuals in just three months: Pity Party, Puzzles, and Color. The singles showcased Noé’s evolution in her sound and production, a forward-thinking style of indie and R&B, as well as a dark quirkiness in the accompanying visuals. All three 2019 releases were heavily supported by Spotify, organically landing on New Music Friday, Indie Pop, Young & Free, Fresh Finds, and more. In total, Noé’s records have surpassed 50 million streams across DSPs.

Noé is a Berklee Music grad and has been playing the guitar since she was 9. Her music has been described as “versatile”, with “flawless lyricism” and having “boundless energy”. She’s written alongside some of the most creative voices in alternative R&B, pop, and electronic including Gallant, George Reid (AlunaGeorge), Kennedi, Wrabel, Yakob, Cara Salimando, Haley Penner, Jesse Thomas, Emily Burns, Sermstyle, and many more.