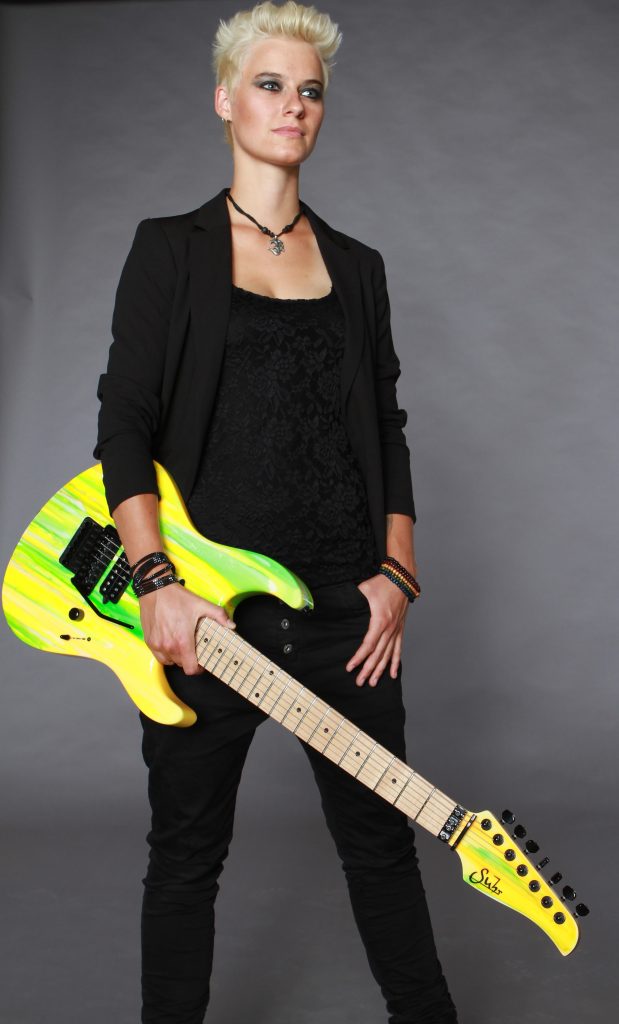 Since the age of 12, Yasi Hofer knew that playing guitar would be her lifelong passion and career. Her skills and talent have taken her all across the globe performing with her band and sharing the stage with legends like UFO, Chris Thompson, Steve Vai, Savoy Brown, Hellmut Hattler, Gil Ofarim and Neil Young. She performed at the 2017 She Rocks Awards in Anaheim, CA, sharing the stage with award recipient Lita Ford and other rock star guitarists like Kat Dyson, Nita Strauss, Gretchen Menn (Zeparella), and Steph Paynes (Lez Zeppelin).

Her natural ability is what caught the attention of her first teacher, which later led to an introduction to the legendary Steve Vai. Within a few months of lessons, a pre-teen Hofer found herself posting videos on YouTube playing various covers of his music. Those videos caught Vai’s attention, and in 2007 he invited Hofer to perform with him onstage at one of his concerts, which changed her career forever. The worldwide attention opened doors for Hofer, who quit school at age 15 to attend the first of two music colleges: Musikhochschule Stuttgart in Germany, followed by Berklee College of Music in Boston, MA.

Today at 24, Yasi Hofer continues to break down barriers for women with non-stop performances around the world. In the interview below, we dig a little deeper into her musical past to find out what fuels her musical passion, and get some advice for women looking to pursue a career in the music industry.

YS: When I am not busy with music, I am an animal rights activist.

WiMN: Where were you born and did you grow up with music? Where are you currently residing?

YS: Thanks to my father who listened to lots of music, I grew up having it around all day, everyday. At six years old I started playing the violin. I continued violin lessons until the age of 12, which was when I switched to learning the guitar.

I was born in a city called Ulm, located in Southern Germany. Currently I live close to Munich in a very little village surrounded by beautiful landscaping. Its a good place for privacy!

YS: My first guitar teacher was my biggest mentor, for whom I am very grateful for. His way of teaching is what inspired my passionate for the guitar. He also introduced me to the music of Steve Vai. Vai became my biggest idol and I started learning his songs after just five months of playing the guitar.

WiMN: During your studies at Musikhochschule Stuttgart, did you notice a large disparity between male and female students? What about at Berklee College of Music in Boston? If so, how did you cope?

YS: Stuttgart was a tough place for me. I felt like I was not really taken seriously. Although it may have been because at that time I was only 16 years old, whereas most other students there were between 25-30 years of age. Plus, I was the only female student in the jazz and pop program. So I did struggle a bit while being in Stuttgart, but I chose to do my thing—I focused on my goals, practiced, worked hard, and made the best out of my time there.

Then came Berklee, and that was amazing. No one cared that I was a girl guitar player and I got treated the same way as everyone else. From what I can remember, there were really not a lot of female guitar players back then. Most of the female students were vocalists. But from what I see and hear now, things have changed a lot. That makes me really happy. I feel like we are really on our way to make everyone see that there is no reason why a girl should not be able to play the guitar the same way a guy does. In general, I feel like we have a good balance of female and male musicians.

WiMN: In 2007, Steve Vai invited you on stage to play with him.  Describe to us what that was like. How did that effect your career as a guitarist?

YS: Playing with Steve Vai was my biggest dream come true. I was totally in trance and remember very little. I was entering the stage and it seemed like my mind shut off completely. I can only remember coming back down from the stage after we played the song. Even when I look back and watch the video from that concert I still can’t believe that happened! Ironically, I played so much better in that moment than any other time back then. Who knows what happened…ha!

Playing in that concert was the beginning of my career. Steve had a really long talk with my father after the show and made sure he realized that I could make something work—that it would be worth having trust in me and that I should follow my passion.

All the newspapers in my area contacted me, I got radio interviews and made my name known in the world via YouTube. Musicians—especially guitarists in Germany—would know who Yasi Hofer was after that show. Still to this day, if Vai invites me to jam with him, I gain a lot of new fans who buy my music and come see me in concert. I am really grateful for that.

To see that video, click here: Steve Vai and Yasi Hofer in 2007

WiMN: Tell us about your gear. What’s currently in your rig?

YS: I am playing a Carvin Legacy amp and Suhr Guitars—the ’80s shred model is my main guitar, along with a custom made 7-string. I also play Fender, depending on what sound I am looking for. Plus mostly Earthquaker Devices effects—the Warden Compressor is my most important one. I also use Klotz cables and Elixir strings.

WiMN: Do you have any hobbies outside of music?

YS: I love spending time in nature with my dogs and being an animal rights activist. That takes up most of my time away from music. There’s not really any time left for other hobbies.

WiMN: Lastly, what advice would you give women who are considering music as a career choice?

YS: Self-confidence. As women in the music business, we will always get into situations where men try to make us seem less professional and we have to make sure to prove them wrong. Always believe in yourself; you can make anything happen. All of your dreams can come true with the right attitude, positive thinking, believing in yourself, and of course… working hard on your goals.

Learn more about Yasi Hofer and purchase her music at yasihofer.com.