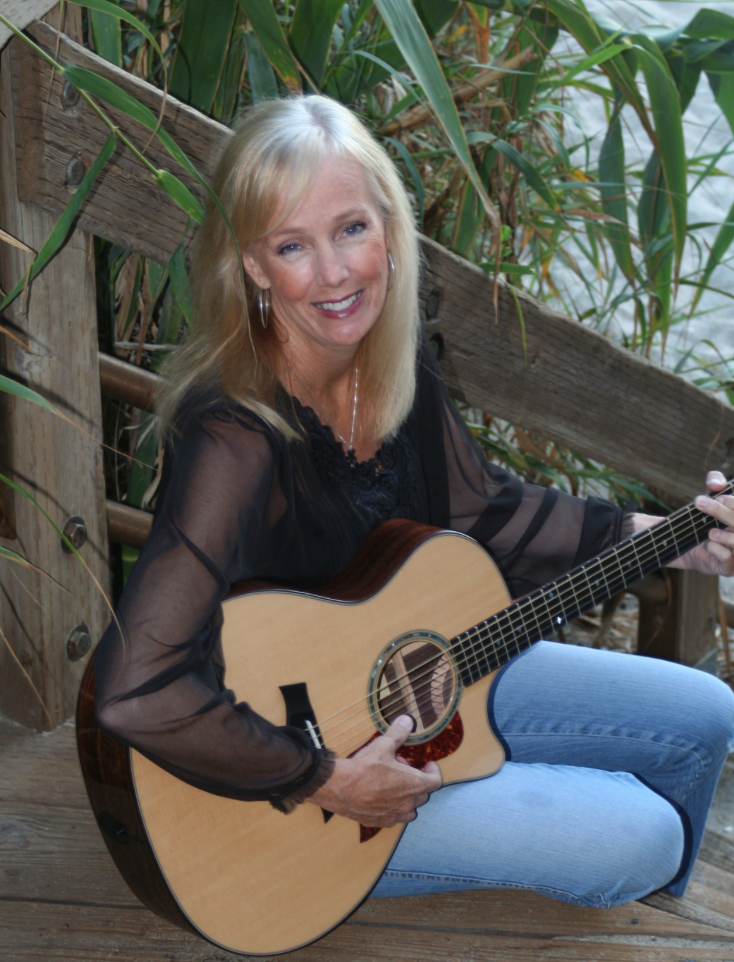 Marlene Hutchinson from Orange County, Calif., is a touring guitar teacher and published author who just gets it. She gets how to instill confidence in beginner guitar players, and her renowned book Learn to Play Guitar in a Day™ promises to get you playing in – you guessed it – one day.

If you’re skeptical, wait till you read this. Her book and guitar workshop were so successful, that she recorded her method on DVD, and it now airs on PBS and has been featured on local networks CBS, NBC and AcousticGuitar.com. Additionally, Learn to Play Guitar in a Day™ is a 2014 Player’s Choice Award nominee.

But the best testimonials can be provided by her students, which she has a legion of in the Southern California area where she also teaches privately.

In the interview below, you’ll learn what questions you should ask your guitar teacher when you first start lessons, more about Hutchinson’s guitar teaching method, and how it doesn’t matter if you’re a woman or a man – we can all play guitar.

For more on Hutchinson, visit http://www.marlenesmusic.com.

WiMN: How long have you played and taught guitar?

MH: My background includes piano and clarinet and my mother says I’ve been singing since I could make any kind of noise, but I didn’t learn to play guitar until I was an adult.  I always thought it would be cool to learn how to play guitar, so 12 years ago that was my New Year’s goal.  I loved it so much that I played everywhere I could ~ my kid’s classrooms, my own classroom (I was a teacher), church band, local festivals, senior care facilities, friend’s houses… Within a year a couple of people asked me to show them how to play guitar, so one year after I started playing guitar I launched my lesson program. My concept was to keep it simple and basic and for my students to begin playing right away.

The idea for the one day workshop came after several adults expressed a desire to learn these concepts in a one day program rather than weekly lessons. In 2009 I created and launched my “Learn to Play Guitar in a Day!”™ workshop. It’s based on my private lesson method and is equivalent to about 6 – 8 weekly lessons.

My goal is simple ~ I want everyone in the world to play guitar because it’s so much fun!

WiMN: How did you learn to play guitar?

MH: I found a group lesson and bought an inexpensive starter guitar. I remember thinking at the time, “I’m not sure I’ll actually be able to play guitar, but I’ll give it a try.” From the first strum I was hooked! My instructor was a wonderful English woman who loved music from the ’60s.

WiMN: What are some essential questions students should ask their guitar teacher upon beginning lessons?

MH: What style of playing do they teach? You want to find an instructor who will teach in the style that you’re looking to play.

What type of equipment (i.e., guitar, tuner, etc.) will I need? Naturally you’ll need a guitar!  There are many excellent brands available for both classical and steel string guitars. Tuner choices range from very basic to more intricate like chromatic tuners and those with metronome features. An instructor will be able to give you equipment recommendations.

What is their music background and how long have they been teaching? You don’t necessarily need Eric Clapton to teach you (that would be cool, though), but consider an instructor’s musical experience and teaching dedication. It’s also helpful to get referrals from current and former students.

What are their fess, policies and availability? You’ll need to know things like the costs, cancellation policies and the days/times they teach.

WiMN: When did you release your book and DVD?

MH: The Learn to Play Guitar in a Day™ book was released in 2009. The book is used throughout the workshop as a guide for the skills and information presented. In 2011 the workshop was filmed to create a DVD version of the live workshop. The two DVD set was released in 2012. It airs on PBS and has been featured on CBS, NBC and AcousticGuitar.com. Additionally, Learn to Play Guitar in a Day™ is a 2014 Player’s Choice Award nominee.

WiMN: What are some of the top five common excuses students give you as to why they don’t practice?

MH: I’ve heard quite few, but here are some common ones:

I couldn’t find my music

I was too tired

My fingers were sore

Find songs that you’re super excited to learn, and then you’ll be more motivated to practice.

Have your guitar out of its case and on a stand in a highly visible location. You’ll be much more apt to pick it up and play it if it’s right in front of you.

Remember this phrase, “practice makes permanent.” The more you practice the more permanent the muscle memory becomes which means you’ll be able to rock those skills and songs!

WiMN: Tell us about a memorable success story of one of your students.

Gosh, I have some pretty cool success stories. Hmmm, it’s hard to choose just one.

There’s the mom of one of my private students who wanted to learn to play because her daughter was learning. She attended the workshop, loved playing and continued with private lessons. It’s been 5 years since she started, she now owns several guitars and she frequently performs with her daughter!

I have another student who started guitar lessons so he could play for his two special needs children. He has expanded his playing to include hospitals, care facilities and he’s been invited to perform at military functions.

There was a student in one of my workshops who wanted to learn to play guitar so she could accompany her singing (she has an amazing voice). A month after attending my workshop she sent me a link with a recording of her playing along with a song she wrote!

I have a student who started guitar lessons with me when he was 78. He wanted to perform at an event. He took lessons every week for three months and rocked his event.  He continues to learn new skills rocking his lessons and performances at 86 years young!

WiMN: You’re currently on a tour teaching your workshop across the U.S. How do you determine where you’re going to teach?

MH: I teach at various colleges and universities as part of their continuing education programs.  I started out in cities where I have family and friends and then I branched out to various locations around the country where there seemed to be a need for my program.

This year I have added music-related facilities to my schedule such as the world famous Red Rocks in Colorado. Additionally, I teach at PBS stations as part of their membership program. One of my favorite things about acoustic guitar is that you can take it with you everywhere and I get to travel to some pretty cool locations.

WiMN: What are some of the most requested songs your students ask for?

MH: I get requests for all types of music genres like oldies, jazz, rock, blues, country, pop, Christian, etc., but some of the most requested are songs by the Beatles, Eagles, Johnny Cash, Sheryl Crow, Fleetwood Mac, Bob Dylan and contemporary artists/groups to name a few.

WiMN: Has your ability as a teacher ever been question/undermined simply for being a woman? If so, how did you respond?

MH: Not really, in a way I think it helps to be a female. There aren’t too many female guitar instructors, so I guess you could say it makes me “outstanding” in my field!

I feel like it doesn’t matter whether you’re male or female, it’s all about your ability to impart the information to a student in a manner that will help and inspire them to play guitar. My workshop and private lesson student population is pretty even gender-wise, but I have been told by women that they attended the workshop or took private lessons with me because I’m a woman teaching guitar. They’ve shared that it makes them feel less intimidated about playing guitar.

I’m privileged to witness the surprise and utter joy as a student (male or female), who has never played guitar before, is playing their first song and it’s within the first hour! Seeing them getting it, actually playing guitar, is hugely rewarding for me.

WiMN: What can students expect to get out of your book?

I teach from a perspective where I assume my students know nothing about music and/or guitar.  We start from the most basic information and build from there. I want to take the fear factor out of learning to play guitar. I can’t tell you how many times I’ve had a student walk in before we begin, looking like a deer in headlights, telling me they don’t know anything and will they still be able to learn. My answer is ~ ABSOLUTELY, and then I like to add in a little guitar humor by letting them know they shouldn’t fret!

WiMN: What is the most encouraging thing you’d like to tell someone who doubts their ability to play?

MH: It is absolutely, totally and completely possible to learn to play guitar, at any age, no musical or guitar experience is required and it’s super fun!

In the words of Walt Disney ~ “If you can dream it, you can do it.”