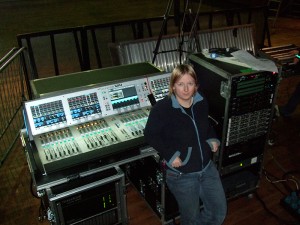 A former bass, flute and piano player, Watson always knew that she wanted to work in the music industry, but didn’t find her true calling until her introduction to live audio in college.

Equally at home as a monitor engineer or mixing front of house, Watson enjoys the daily challenge of live engineering. “Once that day is over it’s on to the next show, next venue, next band,” she says. “Always changing and never gets boring!”

Check out our interview with Watson below, and find out more about her at http://www.polarisaudio.co.uk.

WiMN: What made you pursue a career in live sound?

KW: I have always known that I wanted to be in the music industry. I just didn’t know in what respect until I went to college. I started out as a musician. I used to play bass guitar, flute and a bit keys. I took a Music Technology course and was hooked. Our lecturer was teaching us the ins and outs of analog desks, and I was fascinated.

I went on to meet a local PA provider and became his apprentice. I learned so much working for him. I started out in the grassroots local club gigs. Load ins up flights of stairs. I think its the instantness of the job that keeps me going. Once that day is over it’s on to the next show, next venue, next band. Always changing and never gets boring!

WiMN: What is the most gratifying aspect of your job?

KW: I wear lots of different hats in my job. I tend to end up on the monitor desk. I really enjoy mixing monitors as I get to see the interactions between the band members on stage and be a part of that energy from the show. I love mixing front of house even though I feel quite disconnected from the action whenever I am out there, but I still really enjoy being the one in control of the sound that the audience hears.

Whatever roll I take on as a member of production, I always look for the bit that gives us the adrenaline rush to get through the day.

WiMN: Why do you think there are so few female sound engineers in the industry?

KW: I have seen a HUGE increase in the number of female engineers over the last few years. I think with the new technology coming in the gear is lighter and easier to handle, so more woman are finding lifting equipment isn’t so much as a struggle as it once was.

College courses make it possible for women to gain knowledge of how the gear works before they enter the world of work. When I started college, I was already working for a PA company. I learned the hard way on the job. One person was willing to give me a chance and didn’t hold it against me that I was a woman. I think men overlook the woman who approach them for work experience because of the lack of muscle. I was lucky.

I also think the industry is becoming more professional all round. More and more bands see it a good thing to take out their own sound engineer and this is a position that is pretty easy for a woman to fill. The work is “lighter” but still hard work. I have been on both sides of the fence working as system provider and working directly for bands, where I walk in and mix that one band and then done for the day.

WiMN: What is one piece of advice you’d offer to a young woman who would like to make a living as an audio engineer?

KW: It’s all about reputation.

To succeed as a woman in this industry you have to give 110% every day. You need to make the people you are working with remember you. Being that extra 10% person over everyone else on the crew will make you memorable. Also get business cards and hand them out. Don’t be scared to say “hey can I give you one of these.” Add them on Facebook. Network, network, network!

WiMN: Can you share your experience as a woman working in this male-dominated field? Have there been challenges?

KW: When I started out I had to pay my dues working with the local crew. I was always in the back of the truck throwing the gear around as good as any of the guys. I had to prove I could do it. Both to them and to myself. Once I had the crew’s respect, I could take that step up to being a sound person and giving the crew orders –– and they respected me for it. I have seen other women come in and step in to that sound person roll but had issues with the crew because the dues hadn’t been paid.

I have been lucky as I gained the respect early on and haven’t come up against many situations where guys try to push me out and take over. Whenever I have come across it, I tend to step back… I have a theory that if you give someone enough rope, they will hand themselves. Eventually they will be gone or they will be stuck in their dead end job for good. But I will pass them and move up.

As a woman, I think we hold ourselves back until we are confident enough to step up. I used to teach snowboarding; the guys would go ahead and fall over, and the girls would hold on until they were sure. We need to be more self confident and not be afraid to make mistakes.

WiMN: What is the #1 rule to abide by while living on the road?

KW: Enjoy every moment of it! There isn’t a better job in the world!

KW: For me I’m out with my regular band, The Subways. Their new single is due out in October and the new album at the beginning of next year. Which means we are on the start of the album cycle. We hit the road to Germany next week for a few club shows, and then a full UK tour in October.

I’m carrying the monitor and line system on this run. I’ll be taking out a Yamaha LS9 and Sennheiser G3 IEM system along with a full mic package.

November and December I’ll be back at my usual house gig at Newcastle 02 Academy.