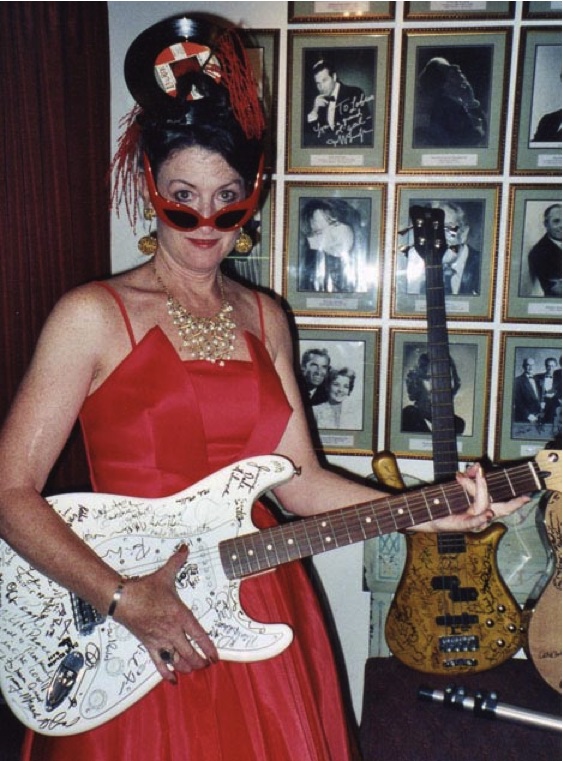 Although Peggie Jones’ official title at the Sings Like Hell concert series in Santa Barbara, California, is Music Producer, we think it should be replaced with something like Fairy Godmother for Local Musicians, or Relentless Purveyor of Good Music.

Jones not only books acts for Sings Like Hell in the historic Lobero Theatre in Santa Barbara, she also hosts the concert series, hits local clubs scouting for the next Bob Dylan or Sheryl Crow, raises money to help keep the series afloat, and does all the grunt work like emptying trash and ice chests. Certainly one “hell” of a woman worthy of recognition!

Read all about her successes in our interview and visit singslikehell.org for more on the concert series.

PJ: No, I’m not a musician, but I have a lifelong love affair with music of all kinds.  I did once play bass, but enough about that!

WiMN: Tell us about your first contact with music. Describe the scenario.

PJ: My dad and mom had a huge collection of 78 rpm records, and there was always great music in the house while I was growing up: Louis Armstrong, Benny Goodman, Cal Tjader, Miles Davis, Hank Williams, Bob Wills, lots of swing and jazz. I used to come home from school and my parents would be jitterbugging in the living room!

WiMN: When did you “officially” enter the music business and in what capacity?

PJ: Well, I did a little management for folksinger Kate Wolf in the late ’70s/early ’80s. I was introduced to her by my friends The Cache Valley Drifters, whom I did some booking for in Northern California around the same time. I wrote Kate’s first biography, but she was so excellent that her talent overcame my lame prose.

WiMN: Where did the name “Sings Like Hell” originate?

PJ: Originally, it’s part of an old blues saying, “Sings like hell, plays like a motherfucker.” But I first saw it when Peter Case released an album with that title.  He had played a couple of house concerts for me in Santa Ynez, and I asked him if I could use the name when I started the series in 1997.  He said OK, as long as I booked him, so he was the first official Sings Like Hell performer.

WiMN: Where did the need/idea of creating a platform like Sings Like Hell come from? When did it all begin?

PJ: In the early ’90s, my friend David Wilkins and I started doing some house concerts in the Santa Ynez Valley. I had a PR firm in Santa Barbara at the time, so it was just an outlet for our shared musical interest. Peter Case, Dave Alvin, Tom Russell and some other people came up and did shows for us. We were drawing a couple of hundred people.

Then, the Lobero Theatre in Santa Barbara had a big hole come up in their schedule due to the bankruptcy of a regional theatre company. David Asbell had just been hired as the venue manager and he called and asked me for ideas. I told him I’d be willing to reserve six dates and try to transfer my little house concert series to the Lobero. I guess the rest is history. I sold six dates as a subscription series, which I guess hadn’t been done before for non-classical music. Rolling Stone said it was the “first subscription concert series in rock’n’roll.” I’m not sure that’s true, but it’s a nice line.

WiMN: Essentially, what are your duties as the music producer for Sings Like Hell?

PJ: Well, obviously I select the performers.  Shortly after I started the series it became obvious that I needed to see a lot of live performances if I was going to achieve the level of excellence that I envisioned. So I moved to Austin in 1999.  I’m out in the clubs several times a week, mainly listening to the young artists coming up. The Hole in the Wall, Cactus Café, the Parish, the Continental Club, Saxon Pub…those are my hunting grounds.

I oversee the print media, which is produced by Cowan Communications.  Dave Cowan also handles the website at singslikehell.org. I do some social media work to promote the series and send out emails to subscribers and people who have bought single tickets to shows in the past.

I do fundraising, which I suck at. My M.O. in the past has been to connect with people who love this music as much as I do and ask them to become sponsors.  But I really need to get out in corporate world and make some partnerships in order to ensure the longevity of the series.

And I run the shows.  I buy the food and beverages and set up the backstage catering, load in all that stuff. I wear ugly thrift store dresses onstage to announce, so I have to shop for those ($20 budget!). I do the announcing, make sure it all goes smoothly backstage, I escort the performers to the meet and greet afterwards.

One of the great things about Sings Like Hell is that the whole audience is invited to party with the artists after the show. It’s really fun! And at the end of the night I empty the trash and the ice chests, clean up the backstage and load out the gear. That’s the glamorous part that everyone talks about!

WiMN: What is the criteria you take into consideration when selecting performers for Sings Like Hell?

PJ: I like to find songwriters who not only write songs, but actually have something to say. I like musicians who not only know how to play their instruments, but are in love with the art of creating music. And I like performers who are keenly aware that this is not just the music business, it’s the entertainment industry.  Connect with the audience, get them to feel something that can be life changing or attitude changing.  My mantra to artists is “Come out swingin’ and leave ‘em hungry.”

WiMN: What are some of the most memorable performances you recall at Sings Like Hell?

PJ: We’ve had almost 300 shows and really so many of them have been fantastic, it’s hard to pick. Damien Rice came when he was just starting and he was terrified standing at the side of the stage before going on. He still talks about how huge the place seemed. Jackson Browne has been a big supporter and he came and did an amazing show with Kiko Veneno, Works Progress Administration, Anais Mitchell brought Hadestown. The Avett Brothers, John Hiatt, Randy Newman.

But my favorite moments are when it’s an artist that the audience is unfamiliar with. You can feel that moment of connection. That’s why I do it.

WiMN: Tell us something you know now you wish you knew when you first started your career in music.

PJ: I wish I’d known how to raise the money it takes to make the whole thing run more smoothly. It’s tough to be 60 and still scrambling to make every show work.  The business has changed dramatically since 1997. I hope I can keep it up. I had a head injury this past fall and had to cancel some shows, so it’s been a big wake up call. There’s no back-up in place for a solo entrepreneur who is selling an unknown product. I sail pretty damn close to the wind.

PJ: Just more of the same. There is no shortage of fantastic singer-songwriters out there. They are living in their vans, eating where they can and performing in lousy venues, just trying to build a career in music. If they knew how to do something else, they’d probably be doing it…as would I!

However tenuous it feels at times, I’m aware that I’m very fortunate to have been able to follow my heart and my passion for music all these years. Thank you, Santa Barbara!