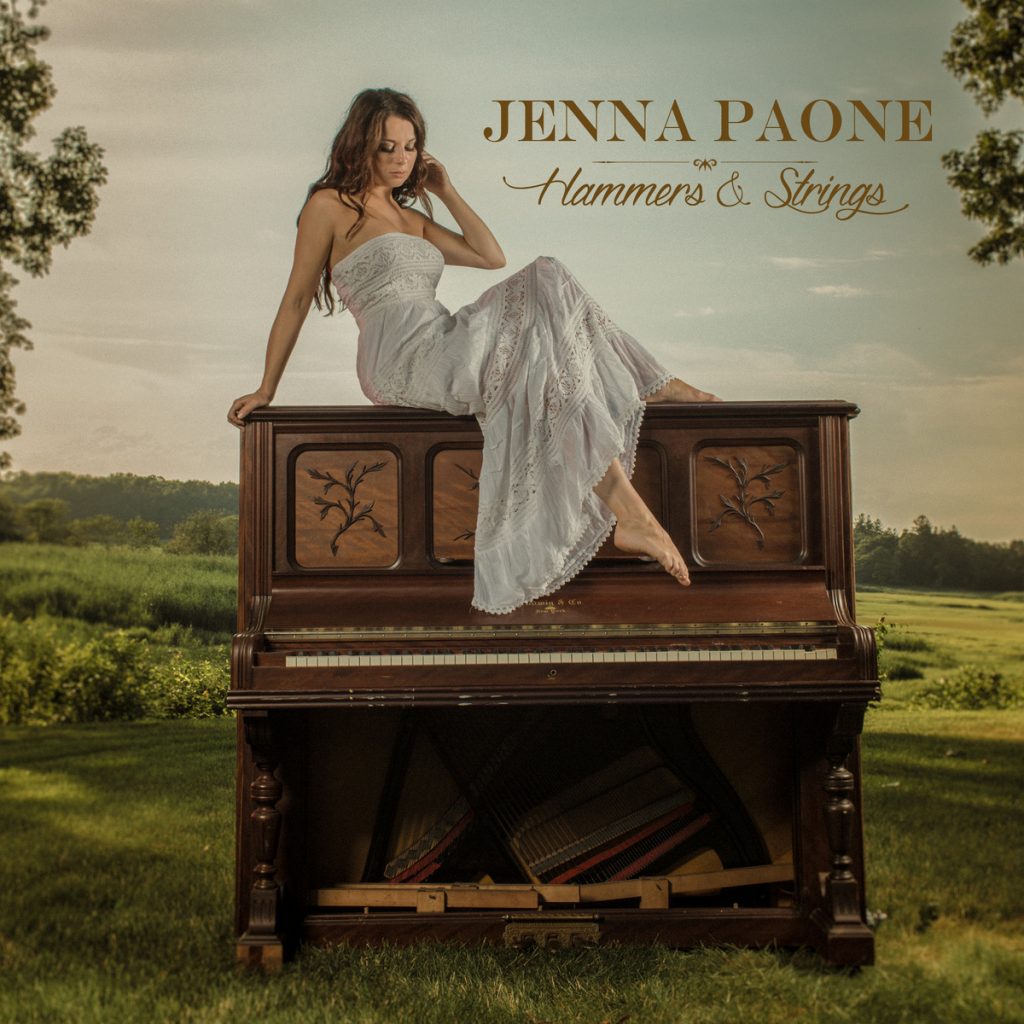 L.A.-based singer-songwriter and pianist Jenna Paone is a familiar face to the Women’s International Music Network.

Originally from Boston, Paone first became involved with the WiMN through our Women’s Music Summit in 2012 in upstate New York, which she attended but confessed she didn’t really want to go. It took a few minutes at the event to realize attending was one of the best decisions she’s ever made.

Paone released her debut album Hammers & Strings in 2014, and has since then graced the She Rocks Awards stage as an opening act, sharing a performance with renowned Alice Cooper guitarist, Nita Strauss. She’s also played at several She Rocks Showcases, and even co-written songs with WiMN Founder, Laura B. Whitmore.

In short, she is a force to be reckoned with (or as her parents endearingly call her, “a bulldozer”). Learn more about Paone in our interview below, and catch up with her online at http://jennapaone.com/.

WiMN: When did you notice your interest in music?

JP: I know it’s a bit of a cliché to say that music was a part of my life since birth, but it really was. Music was a constant presence in my house – my parents are both music supporters and hobby musicians, and they exposed us to everything from Mozart to Pink Floyd.

My older brother played the piano from the time he was born, and as soon as I could reach the keys (and even before), I wanted to play just like him. Paone family legend has it that when I was four, I told my mother “I’m ready.” She asked “Ready for what?” and I said, “Ready to play piano.” According to my mom, I then sat down and played something like 10 songs that I had picked up just by listening to my brother during those years.

Growing up, though, I studied and played classical piano almost exclusively. I also studied classical ballet and theater, and ended up going to Syracuse University for musical theater. At that point, piano was a hobby for me, and while I wrote plays, poems, and short stories, it never really occurred to me write songs until right after graduated.

I moved to New York, started auditioning, and found myself alone in my apartment with a lot of time on my hands. I had brought an old keyboard with me and I started spending more and more time in front of it, working out melodies and lyrics. A few months later, I played some of these early songs for my family and friends, and, with their encouragement started performing at open mics. One thing led to another, and before I knew music turned into a profession.

WiMN: You sing, write songs, and play piano. Do you play any other instruments?

JP: Not well! Actually, growing up, I played the harp because my mother’s cousin was a professional harpist and I thought that was pretty cool. I’ve always wanted to play guitar, and my father is a fantastic guitarist, but it was only this year that I made it a goal to learn. In fact, I’m signing up for guitar lessons! I’m excited to learn a new instrument and looking forward to the impact that it will have on my songwriting.

WiMN: Tell us about how you first got involved with the Women’s International Music Network (the WIMN).

JP: The first time I heard about the WIMN was through an e-mail that my mother forwarded me advertising a female music and songwriting retreat in upstate New York called The Women’s Music Summit.

To be totally honest, I didn’t really want to go, but that summer was a particularly frustrating time in my career, and I felt like I needed something to remind me of why music is fun. And boy, did the Summit deliver!

I’m not usually an overly gushy person, but I honestly can’t say enough about how important that week was in resetting my mindset; it was magical. There were so many things that I learned about myself that changed my music and helped me redefine my goals. It was the catalyst into a whole new phase of my career as a writer and performer, and once I met this group of women, I knew I wanted to stick around.

Over time, I’ve gotten more and more involved in the WIMN, and I like to think I’m one of the family now! Founder Laura Whitmore has become a mentor, friend, and collaborator (we even co-write music together), and the organization has supported me in a million different ways.

Through the She Rocks Awards and showcases, I’ve been able to share the stage with powerhouse women like Orianthi, Nita Strauss, the Bangles, Colbie Caillat, Jennifer Batten, and so many more. I’ve gotten to share my music with new audiences, develop new partnerships, make friends, travel. It’s safe to say I’m a WIMN-er for life!

WiMN: You’re originally from Boston. What is the music scene like over there?

JP: It’s interesting. There’s a thriving indie arts community, and such a large number of skilled musicians and songwriters. You’ve got a constant influx of new talent, especially thanks to Berklee and the conservatories, and there are a good number of genuinely fun venues and listening rooms. The open mic scene is great – if you’re in town, make sure you stop by Tom Bianchi’s Open Mic Challenge at the Lizard Lounge in Cambridge. Overall, Boston is a small city, and a small, tight-knit world where everyone seems to be connected to and supportive of each other.

However, at the same time, the music community can sometimes feel isolated from the rest of the city, especially if you write and play original material. It’s surprising, given how cultured the population of Boston is, but I’m hopeful that that will change. I’m a Boston girl through and through (and a huge New England sports fan), and no one wants to see the city arts scene thrive more than me.

WiMN: You recently moved to L.A. What are your plans there to pursue music?

JP: The move to L.A. came at just the right time in my life. I had released my first full-length solo album, toured, and was ready for the next step. Now that I’m here, I’m working on new material for both myself and other artists. Above all else, I consider myself a songwriter, and I’m very much focused on building my song catalog and collaborating with other writers, producers, and musicians. I’ve also been performing solo, and look forward to putting together full band shows and touring more in the future.

WiMN: You released your debut album Hammers & Strings in 2014. Do you have an album in the works now?

JP: I’m recording new music currently. I plan to release some tracks in the very near future as singles, and yes, I have begun to write material for larger projects as well. Hammers & Strings was such a mammoth undertaking – it was a 15-track concept album that was, in essence, a musical novel. I love writing proper albums that flow and connect and have an underlying storyline, and a new one is definitely taking shape. In the meantime, I’m excited to share what I’ve been working on most recently.

WiMN: Have you faced any adversity for being a woman in music? If so, how did you approach the situation?

JP: Oh, absolutely. I’d be surprised if you could find a woman in music who hasn’t dealt with some sort of gender-specific adversity. I’m lucky to have grown up in a family where I was encouraged to be a strong woman and where I was able to develop self-confidence and mental toughness. I’ve never had trouble speaking my mind or standing up for myself (my parents call me “a bulldozer”), which is helpful when I find myself in less than ideal circumstances.

I do remember two specific instances of gender bias that happened very early in my career and had a lasting impact.

The first happened when my band at the time was in our first big studio session. I was the frontwoman, the primary songwriter, and the co-manager for this band, and the only female in the project. The producer, engineers, and staff were all men as well. During an editing session, one of the assistants leaned over to my guitarist, assuming he had written the song we were working on, and said “Nice song, man.” Of course, this was a song I had written, so I immediately corrected the assistant. “Actually, I wrote it.” I said, “But I’m glad you like it.

A few months later, a booking agent e-mailed me after a show to ask how I was able to bring such a large audience out to the venue because (his words) “Girls in bands never get good crowds.” I responded that I was a professional and therefore took every aspect of my job seriously, said that I was glad he was pleased with our performance, and decided to work with different booking agents in the future.

These experiences were eye-opening and yet completely unsurprising. I’m sure far worse things have happened to me since then, but I’ve found that whenever something like this happens, if I stand up for myself, I’m able to regain control of the situation. And I’m able to move on, without any regrets or bitterness.

WiMN: What advice would you give a young girl looking to pursue a career in music?

JP: Work hard, and develop concrete, technical skills. Skill and raw talent are two completely different things, and skill, which requires hours of practice, trial-and-error, and monotony to develop, is far more valuable in the long run. Skill leads to confidence, confidence leads to bravery and toughness, and you need all of those things in this industry.

Be professional, versatile, flexible, and pleasant. Take risks, make mistakes. Listen to everything you can, especially music written by women. Read books, have adventures, live your life. Support other women in the industry and realize that they are your lifeline, not your competition. And above all, remember that there are so many different ways to be successful in this business – it’s up to you to define your own.