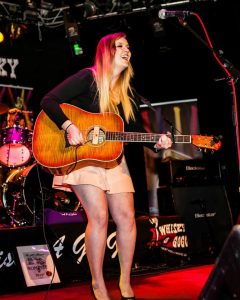 Shyla Day has accomplished more in her short career than most artists could ever dream of. Performing since her early teens, Shyla quickly rose in rank from an open-mic musician to selling out big name venues like the House of Blues and Winston’s OB. One of her earliest singles, ‘Kiss Me,’ has received overwhelming praise, earning accolades from publications across the globe.

When she isn’t performing or writing, Shyla dedicates her time towards her numerous charitable organizations – over 400 in the past 10 years to be exact. This remarkable feat has earned her a nomination for a 2017 Entrepreneur Award, as well as a top nomination in 2018. As a celebrity ambassador for Peace Friends of Hope, she helps children in Uganda receive a proper education, a cause that she is quite vocal about.

We sat down with Shyla to discuss the inspiration behind ‘Kiss Me,’ her work with Peace Friends of Hope, and her recent TEDx Talk at San Diego Mesa College.

WiMN: Let’s start off by going back to your childhood. How prominent was music in your life growing up? Who were the artists that made you want to pursue a career in music?

SD: My parents were musicians, and they toured pregnant with me! My dad passed when I was 1- and music always helped me feel so much closer to him. I started on the violin in Elementary and was involved in choir programs all throughout. In middle school, I did Cheer and they had us choose between the musical or the sport- I chose the musical! I continued doing both music and sport in ninth grade where I picked up the guitar and started writing- and ended up writing for a musical at the Old Globe. After that, I knew I wanted to play music for the rest of my life! I auditioned and had the opportunity to go to a prestigious performing arts magnet school, where I would study and perform music every day.

My mom worked 2 jobs and had to drop me off at the bus early- 5am, and 2 hours early to be exact. I knew that if I wanted to do what I loved I would have to make a sacrifice too! So I befriended the neighborhood gas station clerk. I’d do my homework behind the register, and he’d gift me hot chocolate! Eventually, the bus would come 15 minutes early just for me. The best part, I got to study music every single day.

The artists that just fire me up, are artists like Beyonce, Madonna, and Michael Jackson. I think about the longevity and the influence that these people had in the music industry and I get goosebumps.

WiMN: You had an early start as a musician, writing over 60 songs at age 15 and playing large venues by age 17. What are some advantages you’ve noticed by starting out in the music industry so young?

SD: The biggest advantage was being able to build relationships with people young. Hollywood really watched me grow up and it was due to my consistency. However, doing everything myself from the ground up- I can’t say there were a ton of advantages. Just lots of hard work, no’s, and getting up and getting back to work again. There were times where what I was trying to achieve seemed 100% impossible and not in my line of sight. I never had a manager, ‘momager’, publicist, booking agent and/or etc- and as a young girl in a male-run industry at the time, I felt nobody really took me seriously. At one point, I was getting more responses using a male-name to sign off an email…since then, I got creative because I knew it was going to be a tough road. I knew I wanted to play music for the rest of my life, so I locked down, worked super hard for years (and never stopped!) and in turn, I built a respectable foundation that myself and others could also be proud of.

WiMN: ‘Kiss Me’ is a wonderful song that deserves all the praise it’s gotten. Could you describe the inspiration behind its inception?

SD: Thank you! That song is my baby. I wrote that song when I was 14 and released it in 2016. I was traveling upstate with one of my best friends to spend the summer in Seattle for the first time. Every 15 miles it looked like it was a new season, and being from sunny San Diego, it just wasn’t something I was used to seeing at the time. That song came very easily to me after being so inspired by that drive. I loved the idea of a kiss in the rain, and then it grew into what about kisses in all of the seasons? The rain, sunlight, the full bloom. The song garnered 16 music award/nominations and got coverage around the world in traditional medias! Releasing that song was a whirlwind. I wouldn’t have had it any other way.

WiMN: You have been a celebrity ambassador for Peace Friends of Hope (PFOHF), which helps children get an education in Uganda, for quite sometime now. What first initially drew you towards this organization? 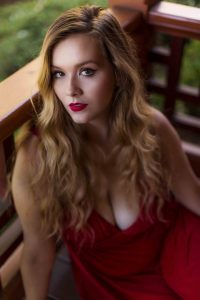 SD: Things like food, water, and education are non-negotiable. No child should have to live without. Peace Friends of Hope is an organization that is still picking up the pieces from the Rwanda Genocide, a devastating event that occurred before I was even born. By being involved in this organization for over 6 years now, I have been able to provide mentorship to these children, while raising funds through my platform where I can see first hand the kind of impact this support has in their lives. I’ve been a strong believer since childhood, that if you have talent, if you have skill, it should be used to do good and to impact lives positively. PFOHF played a big part in realizing how great of an impact one young girl can make, even on the other side of the world! Since, Ive had the opportunity to support thousands of organizations, but one of my favorite achievements with PFOHF is that 6 classes of children have since graduated since I’ve been involved. To learn more: www.pfohf.org

WiMN: In your recent TEDx Talk at San Diego Mesa College, you spoke on the importance of music as a tool for unification between people. What are some examples of this that you’ve experienced firsthand?

SD: When I think about music unifying people I remember my first few sold-out shows. It still blows my mind that even in this time of conflict, the fact that so many people from so many different backgrounds can come together and have this one thing in common is just so inspiring to me. Music is so powerful! During the talk, I had everyone in the room singing together, ‘One Love’ by Bob Marley. Everyone in the room was singing, and smiling! That was an unforgettable and beautiful moment of unity that will leave a lasting imprint on my heart for the rest of my life. I went on to honor activists in music like John Lennon and the artists from LIVE AID 1985, as well as “We Are the World,” and the sheer fact that every person in the room knew these activists, these movements, proved my point even further. Music is Unity! The founder of LIVE AID 1985, Doug Ivanovich, responded to my talk and said, “The artists of the world will rescue humanity because artists have the spirit, the heart, the compassion, the imagination, and the creativity to lead in this time when we suffer from so much unenlightened leadership… and Music is our best Ambassador… and the common language of the human race.”

WiMN: How do you feel about opportunities for women in the music industry in recent years?

SD: Women’s empowerment movements are bringing us together more beautifully now than ever. Both in the music industry and in every industry! The outlook is great and it’s looking, mighty female! After all, we are better together. As long as we continue to lift each other up and grow together, opportunity will be abundant for everybody.

SD: You really should send lots and lots of emails. Be consistent. Don’t ever stop playing music! Also, study and make yourself better every single day.

SD: I am looking forward to releasing some new official singles, video content, as well as a new book 1 Habit for World Changers! Stay up-to-date at my Instagram and/or my official website.