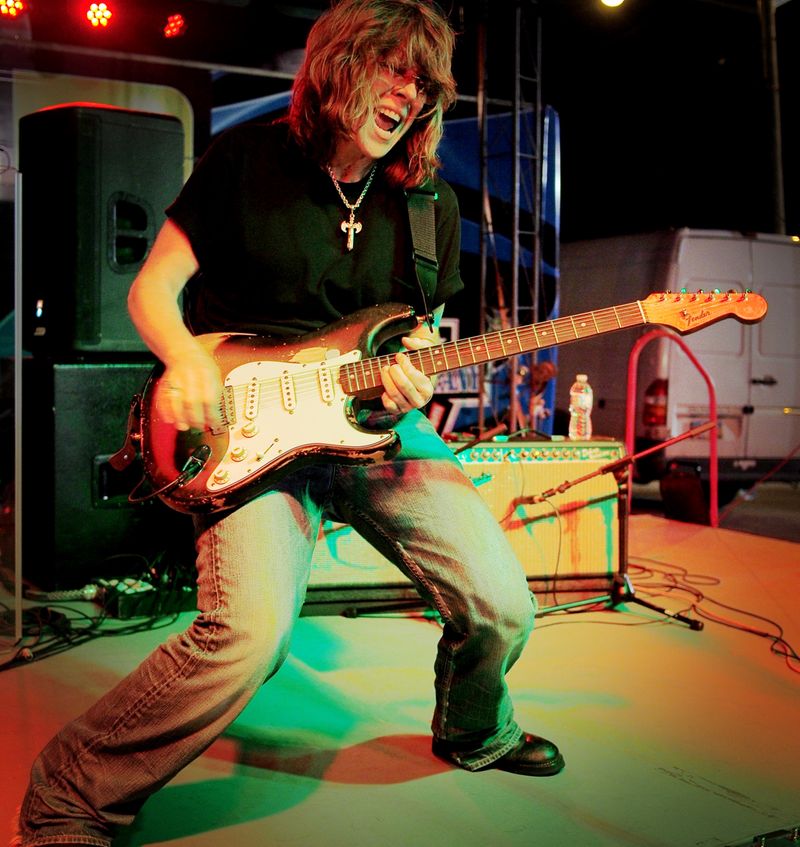 There’s only one person we know of that’s been described as “Stevie Ray Vaughan trapped in a woman’s body with Janis Joplin screaming to get out,” and that’s the one-and-only Kelly Richey.

With over 30 years of experience as a professional independent touring musician, Richey fronts her power trio The Kelly Richey Band, has an unparalleled zeal for guitar, has taught more than 1000 guitar students, owns her record label company, is a certified life coach, is a record producer, and more. Simply said, she’s an all around bona fide bad-ass.

You have to see it to believe it, so head on over to her website to watch videos and more  at www.kellyrichey.com.

WiMN: Wow, first of all congrats on all of your achievements, album releases, and jam-packed tour schedule. Tell us about your two most recent albums The Kelly Richey Band Live at the Blue Wisp, and  Sweet Spirit. What makes them different from the 13 previous albums you’ve released?

KR: Sweet Spirit was recorded in Lexington, Ky., at Shangri-la Productions, produced and engineered by Duane Lundy. The Shangri-La Studio is a large warehouse with an amazingly cool vibe. We set up so we could record live and capture the raw energy I’m known for when I play live on stage.

This is the first studio release that I’ve recorded that truly captured the energy of a live performance giving us the ability to place our focus on arrangement and capturing the best live take. I was joined by funk master Freekbass and Robby Cosenza on drums. Originally I had written and recorded all the material in my home studio playing to just a drum loop. I was heavily influenced by Jack White and the Black Keys at this time, so I wanted to write to just a drum groove so I’d be forced to create guitar riffs and grooves that could stand alone. Once in the studio with Freekbass and Robby, Duane directed traffic and the result was a CD packed full of raw energy and the strongest collection of songs I’ve written to date.

The Kelly Richey Band Live at the Blue Wisp was recorded in Cincinnati, which is home-base for the Kelly Richey Band. With the release of Sweet Spirit, Freekbass and I joined forces live and began to tour in early 2013. This live CD is a reflection of the chemistry created during a years’ worth of non-stop touring during which the songs from Sweet Spirit were allowed to be opened up and develop a new life of their own– which only comes from playing live night after night.

Big Bamn joined forces with the band after touring with Bootsy Collins– consequently, Freekbass (a Bootsy Collins protégé) and Bamn are a force to be reckoned with musically. I’ve always wanted to have my energy matched on stage, and the two of them never fail!  This recording really captures the heart and soul of the band and is an accurate reflection of who we are: a powerful blues/rock power trio with a heavy funk and jam band influence.

WiMN: What was it that made you decide, “OK, I want to start my own record label”?

KR: Starting my own record label happened out of necessity. I was starting to tour and make records and needed distribution. At the time, the independent music concept was the new landscape. This, coupled by the fact that I’d been in a band that was signed to a major label and hence witnessed the cold, harsh reality that there is no guarantee in the music industry, made me choose the path that I felt best insured taking care of my own interests.

WiMN: What advice would you give to someone seeking to start their own record label?

KR: It really comes down to having enough motivation, cash flow, and business sense to record, release and promote your own product vs. having someone do that for you. There are absolute advantages to both! If someone else is going to sign you, you need to make sure they have the funding and the support you need, and that you do not become lost amongst their other artists. If you’re going to do it on your own, it’s a full-time job and you must function like a business!

WiMN: You’ve pretty much touched every aspect of being a guitarist: you’ve toured, taught, composed, produced, recorded and more. Of all the different aspects of guitar playing, which is your favorite and why?

KR: I’m torn between being on stage performing versus teaching people to play the guitar. I enjoy both a great deal and if forced to choose between the two, I would not be able to give up either!

WiMN: Tell us one of your biggest guitar student success stories.

KR: I’ve had many success stories along the way but this is the most recent. In early Nov. 2013, Diana Rein Polacek joined the world’s largest online guitar instruction school www.TrueFire.com and signed up to take guitar lessons from me.

I’ve been an instructor at Truefire for about a year now, and I very much like the instructional and teaching platform it presents for both students and teachers alike. After about six months of guitar instruction from me, Diana found a site called Giveit100, a place for people who have a passion that they want to excel at via sharing a short video of their progress every day for 100 days. Diana decided to take up the challenge and apply it to her guitar playing.

Diana picked one of my songs, “Mean Old World” to learn as the focus of her daily videos.  After just three weeks, here’s the process Diana has made. Quite frankly, I’m blown away by her committment  and dedication! I hope everyone takes a minute to watch some of these videos, as they are truly inspiring and clearly show the impact of what a dedicated practice routine can do to elevate one’s playing ability. No matter what you want to accomplish, it’s always done one step at a time, and here is an excellent example of someone doing just that with passion and determination. Kudos to Diane for all of her hard work!

WiMN: You released an instructional DVD titled Blues: On Steroids. What can students expect to learn?

KR: Note: These video instruction packages allow students immediate access to over 120 of my instructional videos, support tab and instruction manuals, PDF files, and MP3 Rhythm Tracks, and are only available online.  The Blues On Steroids videos can be used as a stand-alone instructional series, or they can be used as support materials when taking one-on-one guitar lessons with me via real-time video Skype. The video guitar instruction packages allow students at any level to move at their own pace while taking lessons from me from anywhere in the world. Individual lessons as well as lesson packages are available.

Here is a link to a full description of each product:  http://www.kellyrichey.com/blues-steroids/.

WiMN: You’re also a life coach. Tell us a bit about that.

KR: People often come to me because they see that I followed my dreams and carved out a career path that supported my greatest passions. After teaching guitar one-on-one and group workshops for over 25 years, in 2008, I began a journey to pursue life coaching certifications to expand my offerings. My coaching consultancy is designed to educate, motivate, and inspire people to identify their life’s true purpose and consequently, achieve the life of their dreams.

WiMN: Your playing style has been compared to Stevie Ray Vaughan’s (NICE!). What does it feel like to be compared to such a huge maestro?

KR: It’s a compliment I do not take lightly! As an artist I do not feel like I could ever fill his shoes, so compliments like this inspire me to push forward as a guitarist, performer, and as an artist—  in ways that hopefully honor the legacy he left behind.

WiMN: What would you tell a young girl aspiring to succeed as a blues guitarist?

KR: You can do it!  Find a great teacher, practice every chance you get, work hard and seek mentors along the way! Most, believe in yourself 100%…!

WiMN: Share any exciting news lined up for the future.

KR: I’m working hard to build my online guitar instruction platform so that I can connect with as many guitar students as possible! I tour year-round but the vast majority of my dates are on weekends, so this allows me the freedom to teach and build a strong connection with my students during my off time.

I’m excited to announce that I recently shot my first guitar instruction series for TrueFire Online, the leading online guitar instruction classroom! This video series will be released in late fall/early winter and will further build my presence on Truefire’s powerful teaching platform (http://truefire.com/classrooms/sherpa_class.html?room=kellyrichey).

I had such a great time last spring opening solo for Robben Ford (who also just happens to be one of my guitar idols), that I have decided to do more solo shows and recording.  I have added a looper to my pedal board that allows me to create a backing track when I play. I can use that playing solo or with the band. My next solo show will be opening for the British band Wishbone Ash, in Mishawaka, Ind., (near South Bend) on Sunday, Sept. 14.

Wishbone Ash pioneered the harmony twin lead guitars format, so I am psyched to see that live!  I’m currently writing songs for my solo show, which I plan to record into a 4-song EP in Dec. I will continue to play with other musicians and to record with them, but for the moment I am enjoying going out on a limb and expanding my live performance and fostering my creative journey.

I’m booking festivals for 2015!  After much touring success and many festivals in new markets in the USA, Canada (and this October I will add Australia to the list), I’m actively booking dates for next year. I plan to perform with my band, perfrom solo, and also teach guitar instruction workshops. I look forward to what the new year brings!