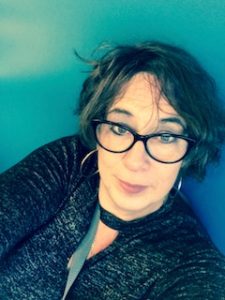 If you find yourself in Chicago on any given night, chances are you’ll be able to watch Joanna Connor tear off the roof with her scorching blues guitar solos at House of Blues or Kingston Mines, where she has residencies.

Since her childhood, Connor has been a guitarist and a fan of the blues, and by her teens, was fronting her own band in Boston. After moving to Chicago and sitting in with blues icons such as James Cotton, Buddy Guy and Junior Wells, Connor’s career took off with a string of acclaimed albums with her own band. She’s also the “woman in the purple dress” you may have seen in a viral video from several years ago, in which she’s performing on stage at a blues festival. Filmed by a festival goer was enjoying her performance, that video went around the world several times, capturing millions of views.

Below, Connor shares insights on her love of music and the guitar, balancing a career with family, breaking outside of “industry expectations,” and her motivation to head back into the studio after a long break and the result — her current album, Six String Stories.

And be sure to do yourself a favor and watch the viral video for what just may be the most killer slide guitar solo you’ve ever seen and heard:

The WiMN: You have monstrous blues guitar chops that any musician would admire. But of course, that can only come from hard work. Tell us how you came to the guitar, how you learned, and how your musical journey developed.

JC: I was a super tall (already 5’ 2” at age 7) and skinny girl. All of my friends were taking dance lessons at a popular dance studio in my hometown but my height didn’t lend itself to prima ballerina. My mother, in a flash of intuition and wisdom, bought me a guitar and lessons. And so the journey began, with a few stops and starts at first, but it became continuous once I hit 15.

I would listen to music of all genres nonstop and somehow get into clubs to see live music—in particular, blues—when I was a teen and onward. I jammed with every good musician I could find, and at 17 auditioned for numerous bands and finally landed a gig with an acoustic band that covered a lot of musical ground. I had my first paid gig when I was turning 18 and had a pretty popular band in my hometown of Worcester, Ma., but I moved to Chicago at age 22 and pursued my apprenticeship as a blues guitarist.

I started my own band in 1987 after playing in house bands at legendary blues clubs in Chicago, backing up numerous blues stars. I was signed to blind pig records in 1989 and we released my first album in 1990. I traveled for 17 years after that, touring 30 countries and 49 states. Then, I landed the house gigs at the Kingston Mines in 2005, and the House of Blues.

The WiMN: A while back, you took a hiatus from touring while your children were young. That’s a tough decision many mothers face, regardless of their chosen career—full time work, full time mom, or trying to blend the two. How did you decide which option was right for you and your family?

JC: The opening of two steady gigs at home was a blessing. I had raised my first child traveling constantly. My son came with me on many trips, but for many he couldn’t come and it was heartbreaking. My mom helped me at that point, but my daughter came along when my son was 11, and it was getting harder and harder to tour with two children and my mom was getting older. In 2005 when I got steady work at home, it was a perfect fit. Lots of sleep deprivation, though; gigs here go until four or five in the morning!

The WiMN: But then you came back with a vengeance, with regular residencies at Chicago Clubs—one of them being the club Kingston Mines, where you first debuted, and continue to play to this day. How does it feel to be playing to a new generation of blues fans?

JC: I never stopped playing actually. The longest break I ever had was two weeks. Playing to the young generation I play to now, between my son and daughter’s age, is a wonderful and invigorating experience! They are eager and attentive, and the audience is full of passion and energy.

The WiMN: While the fans, as a whole, love your playing, was there a time where you were met with criticism or discrimination as a female guitarist? If so, how did you overcome it?

JC: I still do. The music business wants a white woman like me to be a model’s size and an ingénue. The audience overall never cared, but the business side is much more plastic, even in the blues genre. Being a woman guitarist always pushed me. I still see the look of doubt on other musicians and some audience members at times. It happened a lot when I was first beginning, but it pushed me to be that much fiercer of a player.

The WiMN: It sounds like prior to releasing your album Six String Stories, you had gotten into a comfortable place playing live, and then decided to step out of the comfort zone and back into the studio. What was your inspiration to return to the studio, and how was that experience?

JC: My bassist, who was also my drummer for many years, went into the studio and started laying tracks. He enticed me to come in, and we worked together and put together the album you hear now, Six String Stories, and I think it was a fantastic collaboration. Mark Carpentieri, the owner of MC records, who is very supportive of me, added the finishing touches with song selection, editing and more.

The WiMN: You’re known for your killer guitar solos. Do you have a favorite solo to play? Why? And what about a favorite song you’ve written?

JC: I love playing open tuning slide solos and soling on a slow blues in a minor key. My favorite song I wrote was about my two children entitled, “Sixth Child.”

The WiMN: Do you have any advice for our readers who may not be following a “traditional” path toward a music career but are serious about pursuing their craft?

JC: Perseverance is the key. Thick skin is next. Third is being your own worst critic and pursuing the best you can be. Next, and maybe most important, is do it as a gift of joy to the world.