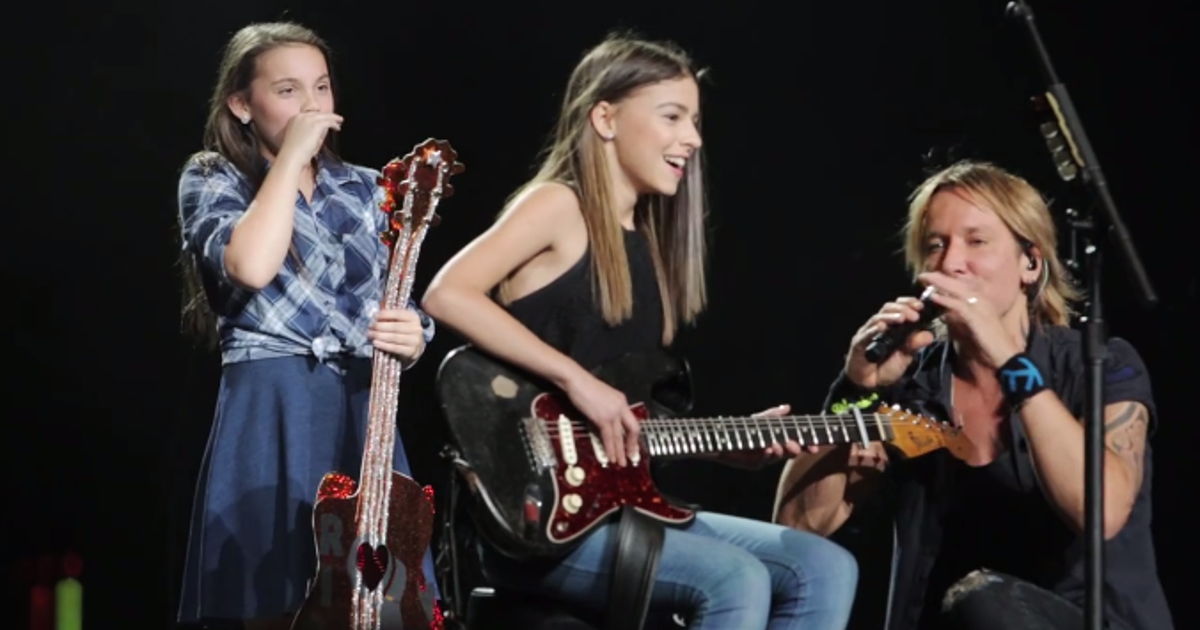 “It’s been one of my dreams since I was little, to look out at a crowd that big and sing one of my own songs.”

Around this time last year, a video wen’t viral of a young singer-songwriter who was pulled up on stage by Keith Urban. Looking out into a sea of 20,000 people in Edmonton’s Rogers Place, Urban asks what she wanted to do when she was older. After responding “singer-songwriter,” Keith hands Hailey a guitar and she bravely sings an original song in front of a sold-out stadium.

“I just soaked it all in, that’s been one of my dreams since I was little, to look out at a crowd that big and sing one of my own songs,” she shares.

Little did the crowd know that Hailey has been a dedicated musician, songwriter, and performer for many years.

In this interview Hailey shares her beginnings, how she balances school and music, and tips for how to tackle the industry as a young performer.

The WiMN: At what age did you know that you wanted to be a singer?

Hailey: I’ve been singing for as long as I can remember, however I didn’t start piano and voice lessons until I was about six years old. Around the age of nine, I also began to write songs and a few years after that I learned to play guitar. It didn’t take long for me to realize that music is what I loved most and was something that I wanted to pursue for the rest of my life.

The WiMN: Who is your biggest role model and why?

It’s hard for me to pick just one because I have many role models that I look up to for many different reasons. However, if I had to pick someone that has been a personal inspiration to me musically, I would choose Taylor Swift. I’ve looked up to her both as a fan and fellow music artist for such a long time. She has helped inspire me to want to be great entertainer and performer and her music was instrumental in my own start in songwriting. I’ve been fortunate to see her perform live three times now and she definitely knows how to put on a “show.” Her music is not only fun, but it’s lyrically sharp and she’s able to tell stories through songs and communicates feelings that are relatable to so many people. I love that. I also think she’s an artist that is sometimes underrated and underestimated. She is constantly pushing boundaries and has proven that she can cross music genres and still be one of the most successful female recording artists out there. She is a champion for females, regardless of any genre and I find that very empowering.

The WiMN:  Is it tough balancing music and school? What advice would you give to students who want to do both?

Hailey: It is sometimes tough to balance both music and school – especially when you want to do well at both and not feel like you’re missing out on things on either end. I am currently starting my first year of high school and the amount of homework has increased and my music and personal time have decreased, although I can’t imagine not having the experiences I have being in school. I think it’s an important milestone and the experiences that I have there, or even the ones I see others going through, have actually inspired me to write many of my own songs. So I try to use being in school to my advantage! I also take rock and pop, acting and musical theatre and those classes also help me continue to learn musically.

To students trying to do both, I would say you need to stay focused on your goals and plans and try to have a positive attitude because there are days when you will feel overwhelmed. Things can get so busy sometimes, so it’s really important to stay organized and find balance. Always make time for yourself and find people who are supportive of your dreams and surround yourself with them. I think we can do anything we set our minds to if we’re willing to put in the work and make sacrifices along the way!

The WiMN: What advice would you give to young women who want to jump into the music scene?

Hailey: That’s a tough one. I don’t think there is necessarily one prescribed “right way” of getting started. Things in the music industry are always changing. However, as cliché as it may sound, I would say don’t ever give up on your dreams and don’t ever stop learning and practicing. This might mean starting with taking music lessons or singing and playing with other artists and musicians. See what you like and don’t like musically. Find what feels right to you and go after it!

There’s also a lot of people out there who want to help, so make sure you make connections with other successful and respected people in the industry and ask them questions on how they’ve made it. Also, be willing to push limits. There’s always going to be people who won’t support you or try to change you or put limits on you, so always stay true to yourself and keep focused on what you really want in life. One of my favorite things is when someone tells another person that they can’t do something and they prove them wrong.

Most of all, be you. If you are authentic and humble and genuinely enjoy what you are doing then I believe other people see that and will want to be part of your journey, too!

The WiMN: The one thing we love about you is that you’re fearless! You see opportunities, take them as they come gracefully, and totally kick butt in everything that you do. Have you ever felt age discrimination or discouragement? What advice would you give to young women who want to be seen professionally but feel the gap of age discrimination?

Hailey: Wow, thank you for the kind compliment! Unfortunately, I have felt age discrimination and this is probably the one thing that I personally have noticed and felt most discouraged and frustrated by in the industry. I have found that when you’re younger, many people don’t take you or your music seriously. I’m not sure the exact reason why, but I think there might be some fear in taking chances on younger artists and musicians. If you look at many of the bigger music contests, showcases and even grant opportunities out there, most are for artists 18 and up. How are younger artists supposed to grow and develop if they aren’t given the opportunities to showcase their talents? I’ve had people tell me I’m too young to know that I want this for a career and that I’m “just a kid,” but that doesn’t mean that I don’t work any harder than the next person who is over 18. I have found that I am constantly having to “prove myself” (not that it’s always a bad thing).

My advice to young women facing struggles is to do just that – challenge and prove yourself! Stay focused, keep working hard and be willing to play anywhere and as much as you can. Show people what you can do! There are people who were willing to take chances on younger artists, like Scott Borchetta with Taylor Swift or Andrew Gertler with Shawn Mendes, and they have proven that with hard work, dedication and perseverance that it can be done!

The WiMN: What is the one thing that has inspired you to keep going with your music?

The one thing that always inspires me to keep going is seeing how music (in any form or genre) can make a difference in the lives of others. Nothing means more to me than having someone write me and say that my words meant something to them or that they were touched by a performance. buy I live for that feeling! Sometimes I play for my uncle and the residents at his long term care facility and there are some whom have dementia or can barely speak, but as soon as they hear a song they suddenly start to hum or sing along. It’s absolutely incredible to see the connection that music has to the mind! It can make us laugh, scream, cry and even transport us to a place of wonder and peace! Music is such a powerful thing and I feel so lucky that I have the chance to help others feel and enjoy something so special.

Keep up with Hailey on her Facebook page here.