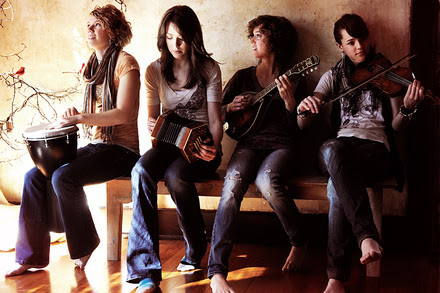 With the She Rocks Awards just a few days away, we are thrilled to introduce our talented opening act: the sisters of SHEL.

The band turns folk music upside down with infectious rhythms, hypnotic vocals and stunning musicianship. Since the 2012 release of the band’s self-titled debut, they have toured across the US and Europe mesmerizing audiences with their ethereal vocal arrangements and energetic performances.

SHEL’s songs have been featured in numerous television shows, films, and commercials for brands such as Glade and Splenda. Plus, their song “Hold On” with Gareth Dunlop is featured in Nicholas Sparks’ film, The Best of Me.

Be sure to show up early to Friday’s She Rocks Awards and experience the diverse musicality of Sarah, Hannah, Eva and Liza. Limited tickets are still available, and you can pick them up now at www.sherocksawards.com.  Find out more about SHEL at www.shelmusic.com.

WiMN: What was it like to grow up together in a musical household? At what point did you decide to start a band? Or did it happen naturally?

SHEL: It happened very naturally. Dad would give us pep talks at dinner about the inventiveness and innovation of our idols, chiefly The Beatles and The Marx Brothers. We formed the band as soon as everyone could play an instrument well enough to perform on stage with Dad. Sarah came up with the acronym SHEL from our names when she was about 9 or so, and it became official.

WiMN: Why did you make the move from Fort Collins, CO to Nashville, TN?

SHEL: It’s a bit of a half move really, we’re very fond of Colorado and the community there. Nashville has an air of magic about it and working there is very inspiring. We have a chance to connect with extraordinary people from all sides of the business; hard working, passionate, devoted dreamers who have made a success of doing what they love.

WiMN: You recently held a live streamed concert from your home. How did that go?

SHEL: It was wonderful. We have listeners around the country that we stay in touch with online, so we really enjoyed putting on a cozy show and pretending that we were all crammed together in our living room.

WiMN: You just launched a Pledge Music campaign for your next album, The Laboratory Sessions. Tell us about the campaign and your inspiration for the upcoming LP.

SHEL: We’re very excited about this project. It’s an exclusive release for our listeners that will only be available through Pledge. There’s a great deal of madness and experimentation that goes into the creative process, and we wanted to share a bit of it with the people who have been so wonderfully interested and supportive.

The release will include raw iPhone demos, alternate versions, and fully produced tracks, as well as a narrative explaining the inspiration and evolution of each song. It’s a sort of commemorative time capsule for a very special period of unbridled and messy experimentation.

WiMN: You create all of your own music videos. How did this come about?

SHEL: It’s primarily due to Sarah’s incredible vision for film. She studied videography for a few semesters, and then she dove in and started making short films and music videos for the band. She has such a passion for storytelling, so her work often reflects a sort of melancholy vignette, which fits the music very well.

WiMN: What was it like to have your song “Hold On” with Gareth Dunlop featured in Nicholas Sparks’s film, The Best of Me?

SHEL: It was great. Very educational, admittedly. Up until the premier of the film in Nashville I had no idea what the point of the red carpet was. It’s certainly an exciting moment in a our career that we’ll always cherish.

WiMN: Have you faced challenges as women in the music industry?

SHEL: You know, we’re very fortunate to be working with people who really understand and believe in us as artists, visionaries, and business partners. There are certainly places we go where we’re seriously underestimated – maybe because much of the entertainment industry has to do with the exploitation of women – but we’ve never seen ourselves through that narrow scope, and that makes all the difference in those situations. There’s something thrilling about having to prove yourself and show what your capable of.

WiMN: What are you looking forward to most at the 2015 She Rocks Awards?

SHEL: Certainly meeting more inspired and passionate women. We’re humbled to be a part of such an incredible event honoring and celebrating women in the industry.