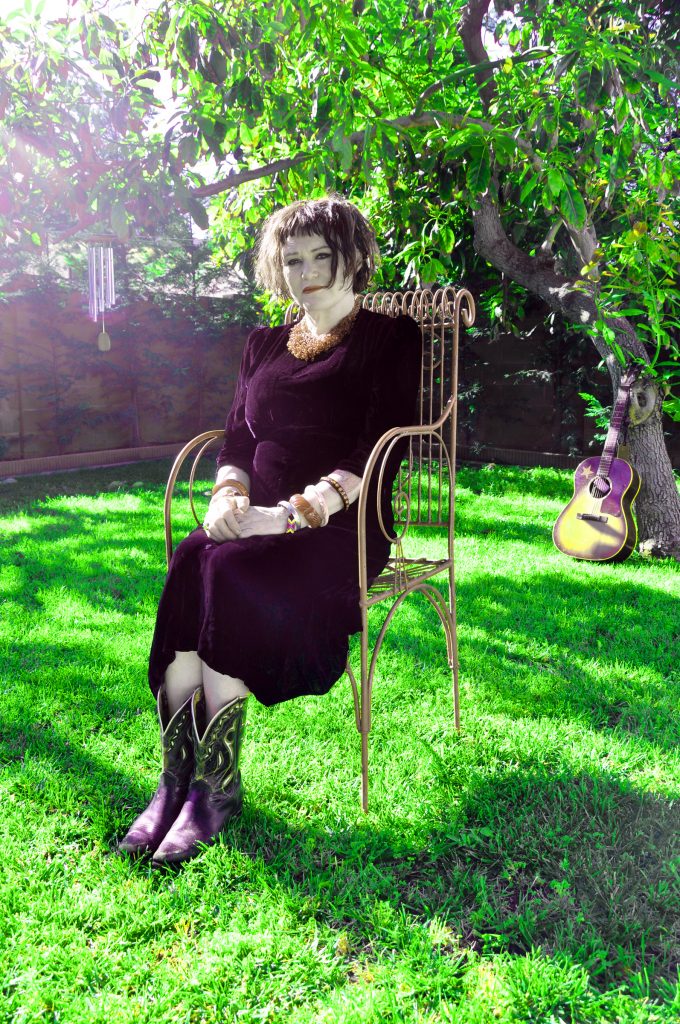 While she is most commonly known as the lead singer of the legendary band X—a group that helped kick off the American punk wave—Exene Cervenka is also the vocalist of The Knitters and The Original Sinners.

Cervenka is also an artist and poet who has released solo albums, launched side projects, and written a number of books. She was also a recipient of a 2018 She Rocks Award!

The WiMN: You’re mostly known for the being the singer of X—what are other projects you have done and currently working on?

EC: In addition to X, I was in the pioneering alt-country/folk group The Knitters from 1983 to present. Originally formed to play the glut of benefits X and the Blasters couldn’t do, the band was Dave Alvin of The Blasters (electric guitar), John Doe (acoustic guitar and vocals), DJ Bonebrake (snare and washtub), Johny Rae Bartel (upright bass), and me (vocals). We covered old timey songs from the early 1900s, ’50s and ’60s country, some originals, and X and Blasters covers. I also had my own folk records in 1989 and 1990 under my name, and the bands I wrote songs, sang and played guitar in—The Original Sinners and Auntie Christ. I’ve done spoken word recordings, books, and lots of art exhibitions.

The WiMN: How did X come to lead the Hollywood punk movement?

EC: The best thing about the L.A. punk scene was no leaders, no typical fan base, no stars. X worked very hard, constantly, and toured and just play a lot more. It helped that Ray Manzarek produced our first album (and the next three). But we were recognized for the originality and musicianship, songwriting, and general weirdness of the vocals.
The WiMN: What inspired you to get into music and art? Who are your influences?
EC: I wasn’t inspired to get into music and art like young people are more nowadays.
I always made art and wrote, but it was only meeting John Doe in Venice in 1976 that the idea of singing in a band occurred to me, at his suggestion. I don’t have influences! I am me.
The WiMN: What was it like moving from Tallahassee, FL to Los Angeles? How were the music scenes different?
EC: In 1976 there were no real music scenes in Florida. The Allman Brothers and many rock bands toured there, but I only saw a few shows when I was a teenager. The punk scene was just starting in L.A., and I think it is legendary and already well documented.
The WiMN: What inspires your art and poetry? Is it similar to what inspires your music?
EC: I write when something just pops into my head. I have been writing fiction and prose a lot more these days than songs. Inspiration is the easy part. What drives an artist to work hard and complete their inspirations into books or music is unique to each artist. It’s not easy to self-motivate every day of your life. It’s hard to find time if you work a regular job (I often do) while touring and working. Mostly, you just want to do anything else just for a break. Discipline is the key.
The WiMN: Was there ever a time you felt discrimination for being a woman in music? If so, how did you overcome it?
EC: I have never to my recollection in my career felt discriminated against for being a woman. I know that my singing style did not appeal to a lot of music business professionals, producers, engineers and the like. There were a lot of people who didn’t want to work with me, X, or other groups, because of that. I respect that. But no, I was never sexually harassed or forced into any roles, never told I couldn’t do something because I was female.
The WiMN: How did it feel to be a 2018 She Rocks Award recipient?
EC: It felt great to receive the She Rocks Award! It was the first real stand-out recognition I got on my own. X has been celebrated in various ways for a long time, and that’s always a thrill. But me on my own, that is another kind of accomplishment. I don’t think of myself as a “woman in rock” all the time, but when young women (or any women!) come up to me and tell me that I mean or meant a lot to them, and made them feel like they could be singers or musicians too, then I feel that special female energy and sister/motherhood. And it feels really wonderful. So thank you so much for that!