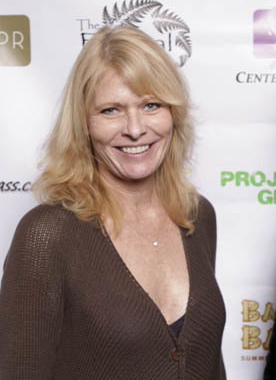 As the Co-Founder and Executive Director of the Rock School Scholarship Fund (RSSF), Winks, along with Co-Founder Carl Restivo, has helped hundreds of wishful mini rockers obtain an education in music, specifically rock.

Winks, also a movie producer and bass player, does more than just help provide an education to children, she helps make dreams come true – dreams that last a lifetime.

Learn more about the Rock School Scholarship Fund here, and learn about the trailblazing woman who helps run it below.

WiMN: When did you found the Rock School Scholarship Fund?

I founded the RSSF with Carl Restivo when we were running the School of Rock in Hollywood. Teaching kids to play music by enabling them to learn the music that they love, rock, is an incredibly effective teaching method.

We would have families come through for a tour whose kids were into music but not stimulated by learning “Mary Had A Little Lamb,” or “Greensleeves” or even Bach. They wanted to rock.

When they discovered that there were rock music schools where they could get a weekly private lesson, and then perform in a band at a real rock venue playing Black Sabbath, or Led Zeppelin, The Beatles or The Who, it was like they’d found Utopia. But then we’d tell them what the monthly tuition was. For us, it was $325 per month, which is a lot of money for some families. And we had no scholarship program for kids whose parents could not afford that.

So with the help of one of the dads at the school who was an attorney, we set up a 501c3 public charity to assist underserved kids ages 13 – 17 who wanted to attend any rock music school in the USA. We were approved by the IRS in 2010 and had our first fundraiser in September of that year with a very special performance by Dave Stewart of The Eurythmics along with Judith Hill and Ann Marie Calhoun.

WiMN: Describe what you do in five words or less.

WW: I was originally hired in 2007 to oversee the five School of Rock schools in Southern California. The company was headquartered on the east coast, and they felt that having someone in the SoCal area who could help with marketing and be a local contact for the franchise schools would be a benefit.

About nine months after joining the company, I was asked to also become the general manager of the School of Rock in Hollywood, so I took over the day-to-day administration of that school.

Carl Restivo was the music director, and he managed the music aspect of the school, selecting which shows the kids would do (Zappa, Funk), and managed the teaching staff, whereas I was doing the marketing, parent relations, admin, and booking shows to provide lots of opportunities for the kids to perform. We did about 40 rock shows per year, at venues like The Whisky and The Roxy on the Sunset Strip, and the now defunct Knitting Factory on Hollywood Blvd.

WiMN: How did the transition to the Rock School Scholarship Fund come to be?

WW: It came about organically. We launched the RSSF in the fall of 2010, and meanwhile, the School of Rock had been bought out by an investment partner.

As they restructured the School of Rock and redefined people’s roles, it was clear to me that focusing on the RSSF was where my passion for enabling kids to experience a “rock music education” could do the most good.

Carl and I both left the School of Rock in late 2010, and we have been building the RSSF into a national program that works with 55 rock music schools in 21 states. We’ve identified about 300 schools in the US that teach a rock music curriculum, and we hope to someday work with all of them!

WiMN: Do you have any artist/celebrity involvement with the Fund? If so, please explain.

WW: We have a wonderful Honorary Board of artists who lend their name and talent to our cause, and we are expanding that support via the special programs that we do.

For instance, Dave Matthews is a VIP judge for the Youth Songwriting Program that we are doing with Carnegie Hall and the Casterbridge Music Development Academy in South Africa, as are Holly Knight, Kay Hanley (Letters From Cleo), Vicki Peterson (The Bangles), Wayne Kramer (MC5), Vusi Mahlasela and several other top South African artists.

Our benefit concerts have been supported by wonderful artists including Orianthi, Robby Krieger (The Doors), Johnette Napolitano (Concrete Blonde), Matt Sorum (Guns N’ Roses) and Alice Cooper. At our concerts, the artists perform with the students. In some cases, the students literally study the artists music for months leading up to the show, learning all about the artists life and history. For the guest artist, it’s always a peak experience, knowing that their music is so loved by this new generation. And the kids always blow them away by how good they play!

WiMN: You are also a movie producer. What came first in your life, movies or music? Please do share a little more about your experience as a film producer.

WW: When I was young, I was equally passionate about music and stories. I played piano and loved learning. But at age 14, I asked my piano teacher if I could learn some more contemporary songs. Some of the neighborhood boys had a garage band, and I thought it would be really fun to join them. My teacher refused. He was classically trained, and that’s all he was interested in teaching. I didn’t know how to teach myself – I had no aptitude for playing by ear. I read music.

At the time, the music books for rock were really simplistic and I got frustrated. So I continued playing, but I got more and more into stories, and spent a lot of time reading every wonderful book that I could. I remember in Jr. High spending every lunch hour for about a month going to the library and reading Moby Dick. For fun. And loving it! Then I started writing plays and recruiting my sister and her friends and my friends to perform them. And that’s how my passion for movies began. It’s anchored in the love of a great story.

I’ve produced a few films, and helped writers and directors get their movies made. I was a literary manager for 7 years, and helped my clients develop several movies for Hallmark, direct-to-DVD, and The Disney Channel, including titles like “Camp Rock.”

WiMN: How long have you played bass and keyboard for? What styles of music do you play?

WW: While at the School of Rock, we launched an adult program. The adults would meet after work, weekly, get a private lesson and then spend two hours rehearsing together for a show. They had a great time escaping from their families and work for an evening, and just rocking out.

Happily, the band needed a keyboardist, so I finally got my opportunity to be in a rock band and perform, all these many years after not getting to do it when I was a teen! The next time the adults did a show, I decided to try bass. I was a complete beginner!

But after 6 months of lessons and rehearsals, I learned a few songs like “Hashpipe” which was big fun to play, and “Immigrant Song,” and we had a great time!

WiMN: Share a compelling story/experience about a scholarship recipient at the Rock School Fund.

WW: Here is a letter from one of our scholarship parents:

“My son is 15 years old, and was diagnosed with autism at the age of 3. The years that followed that devastating diagnosis have been spent on extensive therapy services, nutrition, and music. When he was 7, I realized that music was just the outlet my son needed to help him maintain focus and learn responsibility.

He was so excited about learning music that he taught himself how to play the flute at age 8. He began composing his own music by the age of 9. He became interested in the bass guitar at age 12, but his new high school did not have a class or band that focused on that particular instrument.

He was able to continue with paid outside lessons until I became unemployed and couldn’t afford them anymore. His grades soon began to reflect his lack of “musical therapy.”

The rock program has been such a great experience for my son, and the scholarship came at just the right time. He has regained focus and motivation to keep his grades up, and now has a 3.6 GPA. He has also become more sociable and has met friends who play the guitar and share his same interests.

My son’s dream of having a career in the music industry is achievable because of this wonderful program. Thank you RSSF for renewing my son’s zest for school, art and music…you ROCK!!!!”

WiMN: Do you have any exciting plans lined up for the near future?

WW: We are very excited about the Youth Songwriting Program that we are doing with Carnegie Hall and the Casterbridge Music Development Academy in South Africa. It’s the first time that there’s been a program focused on students in the US and students in South Africa to collaborating and writing songs together online, using Carnegie Hall’s Musical Exchange.

Music truly IS a universal language, so we expect the students to really enjoy working with others from such a different cultural background, literally a half a world away. But beyond that, the students in the US will then get to travel to South Africa and meet their co-songwriters, and perform their new songs at a music festival there, opening for some of South Africa’s biggest rock bands! We are currently looking for partners to come on board and help fund the travel expense for the US students so that they can have this potentially life-changing cultural experience.

WW: Thank you so much for the opportunity to share our story!

Imagine loving a type of music and wanting to play it with other kids who feel the same way. Rock music schools are really filling a void for some kids, especially since public schools are cutting their music education programs. But there are many families who cannot afford to give their children this experience without scholarship assistance.

We are always looking to align with artists and music executives who understand what it means to change a life in this way, and we are truly grateful for your helping us to get the word out about what we do! Thank you!!!