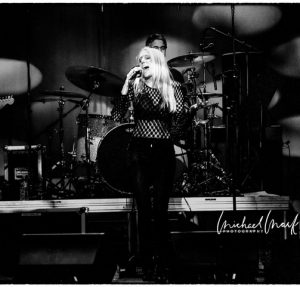 Cass Clayton has been making quite the name for herself since bursting on the music scene just a short while ago. Her enchanting voice and explosive stage presence have earned her spots on some of the most premiere stages and festivals in the Colorado region and beyond. She has also won a slew of awards with the Cass Clayton Band, including top 2 vocalists and best album of 2018 from The Colorado Blues Society Members’ Choice Awards.

When Cass is not captivating audiences with her unique hybrid of blues, R&B, funk, jazz, and soul, she spends her time giving back to the women in Colorado’s music scene with her alliance, SHE-E.O. Founded on the belief that the entire industry succeeds when women succeed, SHE-E.O. aims to help women overcome the many common obstacles they face in all areas of the music industry. Join the SHE-E.O. Facebook group to stay up to date with the coalition’s doings.

We spoke to Cass about her latest album, Play Nice, the resources SHE-E.O provides, and her plans for 2020.

WiMN: How prominent was music in your life growing up? Who were the artists that made you want to pursue a career in this field?

CC: Music was the center of my dad’s world, so it was part of everything we did. Dad was really into blues and jazz, and he played guitar obsessively, although not as a professional musician. It wasn’t uncommon for him to leave the dinner table abruptly to play a riff so he wouldn’t forget it, which makes me laugh now because I finally totally understand it. I do that a lot with lyrics, and I’ve learned to carry a small notebook everywhere so I don’t lose an idea.

The artists who originally inspired me were blues musicians like Muddy Waters, Albert King, Koko Taylor, Etta James, Mississippi John Hurt, Nina Simone – I could go on forever. I also loved gospel music by Mahalia Jackson, Aretha and all of those powerhouse female singers. Bonnie Raitt was and continues to be a big inspiration, because she took those old songs and made them her own. She evolved the genre and came up with her own sound that transcends it.

WiMN: Your latest album, 2019’s Play Nice, is an incredible album that draws influence from a multitude from genres while maintaining a blues backbone. How did the writing and recording process for this album differ from your previous releases?

CC: Thank you for saying that – I loved writing this album, and it felt really different than our previous 2018 album. I had to fire my inner people pleaser so I could say exactly what I wanted to say. Some of what came out isn’t very flattering to me, but I’m ok with that at this point because it made the songs honest and beautiful. In hindsight, Play Nice is an ironic name for the record, because I wasn’t really playing nice at all.

It was also different from the last album because we had a foundation for good chemistry in the studio. This was the second album produced by Taylor Scott, who also co-wrote with me. He’s a phenomenal arranger and composer, and we trust each other. We cut the album in the same studio we worked in the previous year, Far & Away Studios. So we knew everyone’s strengths, and I feel like we were all connecting intuitively this time. Our timeline was tight, which added a layer of pressure, and that’s not always ideal but it worked out.

WiMN: Amongst many other awards, you have been voted one of the top 3 slide guitar players in Colorado. What inspired you to first pick up the slide?

CC: I started as a blues and soul singer doing cover tunes, and I would always fall in love with songs that featured slide guitar. It’s so similar to the human voice and can express emotion that way. There aren’t a lot of slide players in Colorado, and I thought it would give the band more flexibility in the material we chose. I had never played an instrument before, and I still don’t play any other type of guitar other than slide guitar. I use it as an accent when there’s a place for it, like an extra voice.

WiMN: You co-founded SHE-E.O. as a way to help women musicians in the Colorado area succeed in their musical careers. Could you briefly describe some of the services your organization offers? 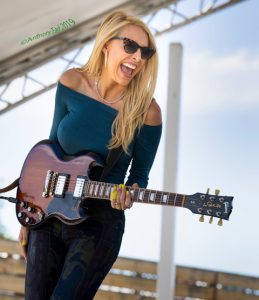 CC: Yes, and it’s not just women musicians, but women in all aspects of the industry (singers, songwriters, instrumentalists, producers, talent buyers, venue owners, press and hired guns). We were facing common business challenges and the age-old issues of getting locked out of higher level opportunities. So we wondered what would happen if we started to work together to create our own shows. The truth is, women have some advantages in the market and we need to learn to sell and leverage those advantages. As musicians, for example, our audiences tend to be loyal to us. The vast majority of bands are all-male, so a woman-led band gives audiences something different.

In terms of services, SHE-E.O. is an alliance, rather than a service-providing organization. We decide together what our common challenges are and then go about solving them. We want women in the music industry to be educated and also to have a group of like-minded business people they can trust. When we find a book that’s essential reading we put it on our social media pages and that becomes the book we discuss at the next meeting. We recently created and are testing a women’s music series called “Woman Up”. With Woman Up, we book several bands and either rent the venue or ask the venue to support an all-women event by giving us a fair portion of ticket sales. Then we promote it like mad and do everything we can to make it successful for all involved.

By the way, one of the key ideas and a foundational ethic is that “when women do well the world does well.” We want the guys to do well too. We are doing business with amazing and supportive men and our vision of success is inclusive.

WiMN: How do you feel about opportunities for women in the music industry since first starting your career?

CC: I don’t have a 20-year music career as a reference point, but I believe things are changing rapidly. Even in the last two years there’s been a lot more awareness that women in the music industry need support. By and large, I believe the mass consciousness of the industry is becoming more and more equal. Also, women like Aretha Franklin, Bonnie Raitt, Dolly Parton, and so many others blazed a trail. We’re continuing to sweep and move rocks off that trail, because it needs to be done. I believe things are going in the right direction and hope we leave a healthy legacy for the women in music who follow us.

CC: If you love what you do, support others in their success, and work really hard, the right people will find their way into your life. They’ll want to be part of your project because you’re a hard-working, love-spreading human. Beyond that, it’s really important to have mentors and partners. Each of us has limitations in our skill set. And we all need encouragement when things get hard, money isn’t flowing or we’re stuck creatively. So even if you’re not the social type, find at least one person you can trust and meet regularly to get a new perspective or potential solution. And, of course, help everyone you can along the way.

WiMN: Finally, what’s in store for 2020? Are there any upcoming projects you’d like to promote?

CC: I just started writing new songs this week, so there will definitely be new music coming. That said, we’ve done an EP and 2 CD’s in 3 years, and this year I’ll be releasing singles. Eventually that will turn into an album, but I like the idea of having 20 songs to choose from before we compile the next full-length album. Also, SHE-E.O. will be a focus this year. We’re really just getting started in terms of figuring out best practices and researching what’s happening on a national level to help women in the music industry. I’m excited to learn about what other communities are doing so we can bring that back home.