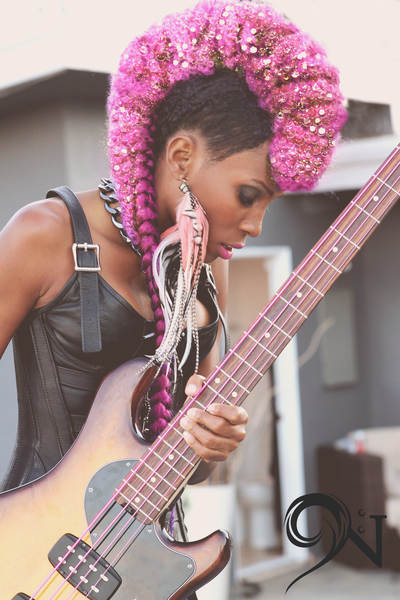 We first experienced Nik West at the 2013 She Rocks Awards. Performing alongside She Rocks-winner and guitar phenom Orianthi, West brought her own commanding presence to the stage that just couldn’t be ignored.

Coming up in a musical household, it was her family that helped to inspire and push West to pursue her musical dreams.

Today, after the release of her debut album Just in the Nik of Time – plus collaborations with Dave Stewart of The Eurythmics, mega-producer Glen Ballard, Prince, John Mayer, Marcus Miller and more – West has found a distinct place among the industry’s top bassists.

As gifted as she is musically, she believes in giving back as well. Partnering with Girl Rock Nation and Rock ‘n’ Roll Camp for Girls, West inspires young female musicians to pursue musical dreams of their own.

Keep up with Nik West at www.nikwestbass.com.

WiMN: What was your introduction to music? What made you decide to pursue bass?

NW: I grew up singing in the choir at church. My dad has 12 brothers and they always got together to sing and play instruments every single time they saw each other. I grew up around music.

The day I decided to pursue bass was in high school after I heard MJ’s “Wanna Be Startin’ Somethin’.” When I heard that bass line, it lit a fire!

WiMN: You’ve had the opportunity to collaborate or perform with an amazing list of artists. What lessons have you learned? Can you share any memories?

NW: I have learned a lot of lessons. Dave Stewart taught me about differentiation. He said if I wanted to be an artist that wanted to be noticed, I had to learn the art of differentiating myself. If that meant changing the hair so no one would confuse me with someone else then that’s what I had to do. If it meant dancing or even doing flips on stage with my bass, then that’s a good goal. He also taught me about trends. They come and go. Did I want to be trendy, or did I want to be a classic? He gave me a lot to think about.

One memory that comes to mind is the day I was called by Prince. The first day I met him, he took my bass and showed me how to “dig in” to the neck. He told me that there are so many ways to play a simple song, but the groove and the way you dig in is what makes the difference. It made him Larry Graham’s biggest fan. So of course, my homework was to study Larry Graham….and dig in!

WiMN: Can you tell us about your involvement with Girl Rock Nation and Rock ‘n’ Roll Camp for Girls?

NW: Girl Rock Nation and RNR Camp for Girls are programs that strive to get more females to pick up instruments. Many start playing and then, for some reason, get discouraged. So it is our goal to help keep them motivated and inspired. Those gals are all dear to my heart because I remember being a newbie and no one would give me a chance because I was a girl. It is always the best feeling when I am giving back.

WiMN: What musical projects are you working on right now?

NW: I am currently working on my second album. I have put it off for a couple years since I have been touring and collaborating with other great artists. I spent a lot of time playing bass for some of the greats, so it is time to step out and show everyone how much I’ve grown. Play best friv games on the site friv games now!

WiMN: Who are some of your role models in the industry?

NW: Dave Stewart is a big role model for me. Orianthi, who also doubles as my best friend, and Steven Tyler, who is an absolute delight to be around.

NW: There were challenges when I was a kid. The boys wouldn’t let me play with them. When I came to get on bass, they would try and kick me off and call one of their boys to get on. Now, I think the industry is very accepting of female musicians, especially since there are so many that are extremely exceptional.

NW: The saying is true… “A girl has to be twice as good as the boys to be thought of half as good.” Practice!!! Don’t depend on sex appeal to get you where you want to be. Most importantly, own it and kill it on your instrument and always show love to the other girls around you.

NW: World domination (as Madonna said in the beginning, haha!).

Well, 2014 has already started out great! I had an awesome tour with my band in Japan and we will be headed to Germany in a few months. After the album is finished, I will be doing more touring with my band…and possibly opening up for a very interesting person! 😉 Stay tuned!