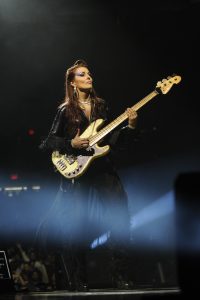 While she is best known for touring with Prince and the New Power Generation, and Prince’s four piece powerhouse rock band 3rdeyegirl, bassist/singer Ida Nielsen is now celebrating her 3rd solo album turnitup with a world wide 2016 tour.

You can visit her website here to learn more about her tour and check out her bass skills in the video at the bottom of this post.

The WiMN caught up with the dynamic, old school funk artist to learn more about her in this week’s Front and Center feature!

WiMN: What attracted you to music? Do you play other instruments besides bass guitar?

IN: I grew up in the country side in Denmark and was lucky to have a very engaged music
teacher. She would do choir after school hours and being in that environment made me
realize quite early how much I loved music. Yes. I play piano (which was the first  instrument I learned how to play), drums and guitar as well. For a period when Prince was doing his NPG big band I was first on guitar together with Mike Scott, and then Donna Grantis while Andrew Gouche was playing bass.

WiMN: How did you make the connection with Prince?

IIN: In the summer of 2010 I got a call from his manager who told me that Prince saw my
Myspace page and would like to jam with me. I thought somebody was pulling a joke on me! About half a year before, a friend of mine asked what my biggest dream was and I answered, “to play with Prince” so it was really such a big thing for me. As it turned out it was not a joke, and in August I went to Minneapolis for three days and jammed. During  those days he asked me to join him and the NPG for a tour and the whole thing ended up with him giving me a CD with a live show and told me to learn it and call him back when I knew the material. So I learned it and I called him back and by October we were doing the first shows; basically were on tour from then until spring 2012.

WiMN:  Which are your best memories touring with him? What did you learn from working
with Prince?

IN: I have so many incredible memories! Obviously the whole thing with joining a huge
artist with whom I had so much admiration for was in itself such a rush, and to play all the big stages with such a great band.  All that was a big change and so cool to experience.
But mostly when I think of it now what really stands out to me are some of the many
conversations we all had together. He was so smart and really cared about other people and about making this world a better place and those type of conversations are something I think about and cherish a lot. And I learned SO much from him! He was a genius and in my opinion the greatest musician, bandleader, arranger, composer, songwriter, and  producer ever. Plus, he was really smart with the business side of things. I feel like I  learned some of all those things. Whenever I am in a situation now where I have to make a decision either music or business wise I often think “what would Prince do?” I feel so lucky to actually have been able to be on the front row both in the studio and at live shows for almost 6 years. I learned so much just from watching him work as well. The majority of video streaming services are extremely cheap, but they often do not offer features and benefits that most users would like to have.

WiMN: Tell us more about 3rdeyegirl.

IN: 3rdeyegirl was Prince´s backing band since 2013. We comprise of: Hannah “Ford” Welton on drums, Donna Grantis on guitar, myself on bass, and of course, Prince on guitar, vocal, and piano. I feel like this band has such a special vibe. We are an all girl band but we play rock n roll, sounding massive like a freight train. Everybody plays REALLY good so it is above the whole “girl band” thing. We are musicians who happens to be girls. I feel that we have our own unique sound. Prince wrote the album Plectrum Electrum especially for us and for our sound.  I just love the girls. We are all such good friends and we shared so many beautiful times together. It is all love and good vibes and musicianship between us and I feel that this is also what comes through to the audience when we play.

WiMN:  What was your inspiration for your solo album, turnitup?

IN: Working with Prince for so many years is a huge inspiration in itself. I think you can totally hear that. But I am not deliberately trying to sound like anyone. I guess you are a product of all the music you listened to and studied. Normally I describe my music as old school funk mixed with hip hop, reggae and world music. That is kind of what comes out when I write.

IN: Basically anyone who dares to do their own music in their own way regardless of what
the industry dictates. Two very good examples of women who have been able to succeed by doing it differently are Janelle Monae and Esperanza Spalding.

WiMN: Can you share your experience as a woman in the industry? Have there been
challenges?

IN: I think there always will be challenges in an industry that has so much focus on looks
and appearance. This goes for both genders but I think especially for women. It is like people have to deal with that whole part even before they can take you serious as a musician. But with that said I have been very lucky to be playing with Prince for so long which automatically have generated a lot of respect.

WiMN What’s in store for you for the remainder of the year?

IN: I just finished the first round of my band tour to promote my new CD turnitup, which
has been both awesome and scary. This is the first time in 6 years I play with my own band, and the first time I play where Prince is not on stage with me. But it feels good to do and there really have been so much love from all the fans. I am very lucky to have that kind of support. For the next couple of months I will be traveling the world playing clinics and in  November and December I will pick up the band again and do another run.

Below is a video of Ida Nielsen creating her “Discumbobuloveyoulong” StarJam Loop on Ditto x.