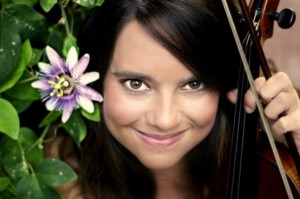 Growing up in Buenos Aires, Arnold made frequent trips with her family to the United States, where she soaked in the cultures of San Francisco, New York and other cities. She has been exposed to music her entire life, having played with and composed for orchestras at a very early age.

A graduate of Berklee College of Music, Arnold now resides in Los Angeles, where she regularly gigs, composes music for film, and gives private lessons to an army of 40 students per week.

We are pleased to feature the ever-talented Camila Arnold for this week’s interview. You can hear some of her work here and watch a live performance at the bottom of this post.

WiMN: When and what was your first encounter with music?

CA: My first encounter with music was when I was walking with my parents in San Francisco when I was two years old. A man was playing a keyboard on the street and I stopped to listen and I didn’t want to leave. That’s when my parents realized that I loved music.

My father has told me that the first melody I ever hummed was “Don’t Stand So Close To Me” by The Police. It was in New York when I was three years old. At age five, I started playing recorder in kindergarten at the Waldorf School where I grew up in Argentina. After coming home from school, my favorite game was turning on the radio and playing songs by ear.

My mom used to play violin at the orchestra at my school and I used to go to the rehearsals with her. One day, they was rehearsing Beethoven’s Symphony No.6 “Pastorale”, and I took two pieces of wood that I found on the floor and started to clap the rhythm. The conductor asked me if I wanted to join the orchestra and I said yes, so he added a chair and I continued playing the rhythm with my wooden pieces.

The next rehearsal I brought my recorder and played by ear. I hadn’t taken any music lessons up until I was five years old. At age seven I started taking violin lessons and continued playing violin in that orchestra.

At age twelve I wrote a piece that was orchestrated by my music teacher and conductor, then played by the orchestra at a concert. That’s when I realized I wanted to learn composition.

WiMN: What instrument(s) do you play?

CA: Violin is my first instrument. I also play viola, piano, I sing and I’m starting to play cello.

WiMN: Where are you from originally and when did you come to the US?

I’m from Buenos Aires, Argentina. I came to the US many times as a tourist since I was two years old. I moved to Boston in 2001 to study Film Scoring at Berklee College of Music.

WiMN: Tell us your most memorable experiences at Berklee.

CA: I had many great experiences at Berklee. I’ve been a big fan of Regina Carter since I was very young, and she was giving a clinic the first week I arrived at Berklee. I couldn’t believe it! What a great welcoming experience. I knew I was in the right place.

I had amazing teachers there too, who I learned a lot from. They helped me grow as a musician and also gave me the the opportunity to play concerts at the Berklee Performance Center with amazing musicians from all over the world.

WiMN: What inspired you to study film composition?

CA: I love film and I love music. I studied classical composition at the university in Argentina, but no schools in my country offered a film scoring major. So since I have a European passport, I decided to find music schools in Europe that offered this major–but many people recommended me to go to Berklee College of Music.

I came back to Argentina, studied an intensive english course for a year, and auditioned in Buenos Aires to go to Berklee. On January 8th, 2001, I arrived in Boston, MA.

WiMN: Do you have any other majors?

CA: I studied Classical Composition in addition to Film Scoring.

WiMN: You’re based out of Santa Monica where you have an army of students. How did you develop such a large clientele?

CA: I’ve always loved children and wanted to be a kindergarten teacher, so I decided to combine music and children. When I moved to Los Angeles, I posted flyers in lots of supermarkets and schools and I got many students that way. After that, it was from word of mouth.

Now I’m teaching forty children a week, one on one. I love to teach so much and it is so much fun that I don’t even think of it as a job. I learn a lot from children. They are so pure and honest. I love to show them how to enjoy and create through music.

We have recitals twice a year. I tell them that a recital is a music party, and their performance is a beautiful gift for their families. I say that if they play an extra note (I never use the word mistake–I don’t believe in mistakes, especially with children) they can keep playing through to the end of the song, or they have the freedom to start over. I don’t want them to have fear at all and I want them to really enjoy their recital.

WiMN: Are you able to share the experience you had performing for some of Hollywood’s biggest stars?

WiMN: You gig regularly. How do you balance a full load of students plus life as a performing musician?

CA: I teach violin during the day after my students come home from school, so I have the mornings to write music and practice. I teach eight children per day, and my gigs and rehearsals are at night, so I can manage to do everything. If I have to travel, I cancel my lessons with students–the parents totally support me in my career, so they just wait until I return.