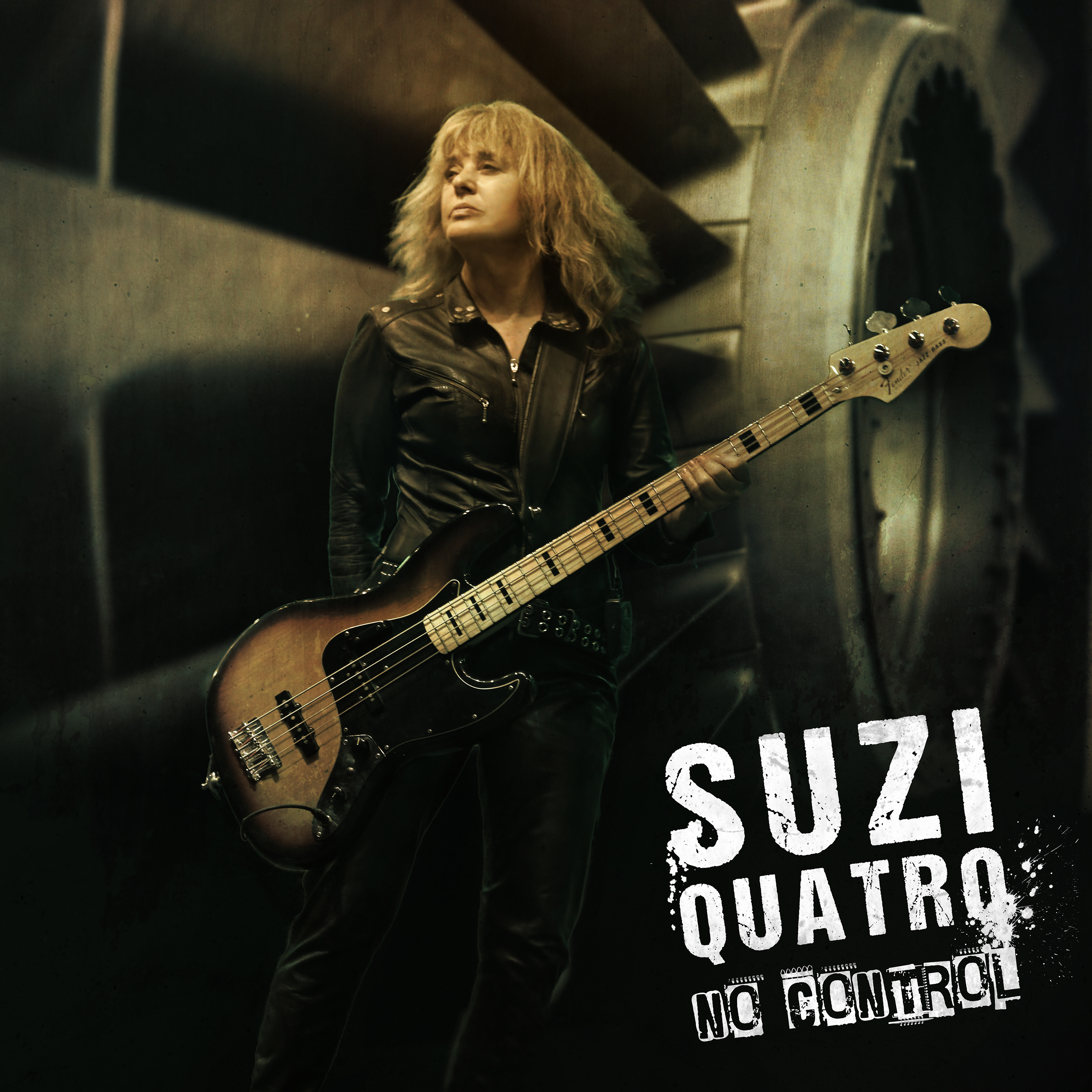 Suzi Quatro is an absolute legend in the music industry and has knocked down doors for women in rock. She is the first female rock singer and musician to gain world wide success. Her music career started at age 14 when her and her siblings (including Patty Quatro of Fanny) formed the all-female group, The Pleasure Seekers. Suzi played bass and eventually sang lead, touring for 7 years before they changed the name to Cradle in 1969.

The Detroit native was introduced to music early on in her childhood playing bongos in her father’s Jazz band, “The Art Quatro Trio”.  From there she studied classical piano and percussion. Following her success in Cradle, she pursued a solo career in 1971, traveling to England to work with now legendary songwriters Chinn and Chapman. Between 1973 and 1980, Suzi Quatro was featured in the British charts for no less than 101 weeks, and has sold to date over 55 million records, and still counting. Her hits include, “48 Crash”, “Too Big”, “Devil Gate Drive”, “Daytona Demon”, “The Wild One”, “She’s in Love With You”, “Mama’s Boy”, “If You Can’t Give Me Love”, “Rock Hard”, and a million seller in the U.S., “Stumblin’ In” a duet with Chris Norman. She was one of the first acts to perform in Russia (1989).

Her big break into the American music scene came with her famous acting role as Leather Tuscadero on the hit 1970’s TV show Happy Days. Her character ran from 1977 to 1979, opening doors for many acting opportunities including the British comedy-drama series Minder. In theater she played Annie Oakley in a London production of Annie Get Your Gun, and in 1991 she performed the title role in a musical about the life of actress Tallulah Bankhead (Tallulah Who?).

Adding to her list of accolades, Suzi had success as a radio DJ in 1999 for BBC Radio 2. She hosted a weekly show of special documentaries which included Elvis Presley, Otis Redding, Janis Joplin, Jim Morrison, Patsy Cline. Suzi was nominated for Music Broadcaster of the Year at the Sony Radio Awards in 2006.

With an impressive career spanning 50 years, Suzi Q is showing no signs of slowing down. Her new album No Control is set for release March 29th, and has released the single, “No Soul/No Control”. Plus, a documentary is in the works and is set for release in Australia by September 2019. We reached out to the iconic Suzi Q to find out what inspired her latest album, and how her incredible journey has impacted her career in music.

WiMN: Currently you have a new album coming out on March 29 titled No Control, along with a documentary titled Suzi Q set for release in Australia later this year. What can long time fans and newbies expect, and what influenced the new music?

SQ: I have written and recorded No Control with my son, Richard Tuckey who also plays guitar. This album is getting the most attention and best reviews I have had in many years. It is organic – every song has its own personality, and every lyric says something. It is me today. I have come full circle and have come back home.

WiMN: You came onto the music scene back in 1969 during the explosion of the women’s liberation movement with an androgynous, edgy look in a time when fashion and feminine appeal was strongly suggested for women. What influenced your fashion? What was your intention?

SQ: I would like to think I made a difference. I was the first female rock musician/singer to have worldwide success. I had no blueprint to follow, I just stuck to who I was. Not so much a feminist, but a musician. I do wish that today’s female artists would put a few more clothes on. Near nudity on stage is not what I fought for. 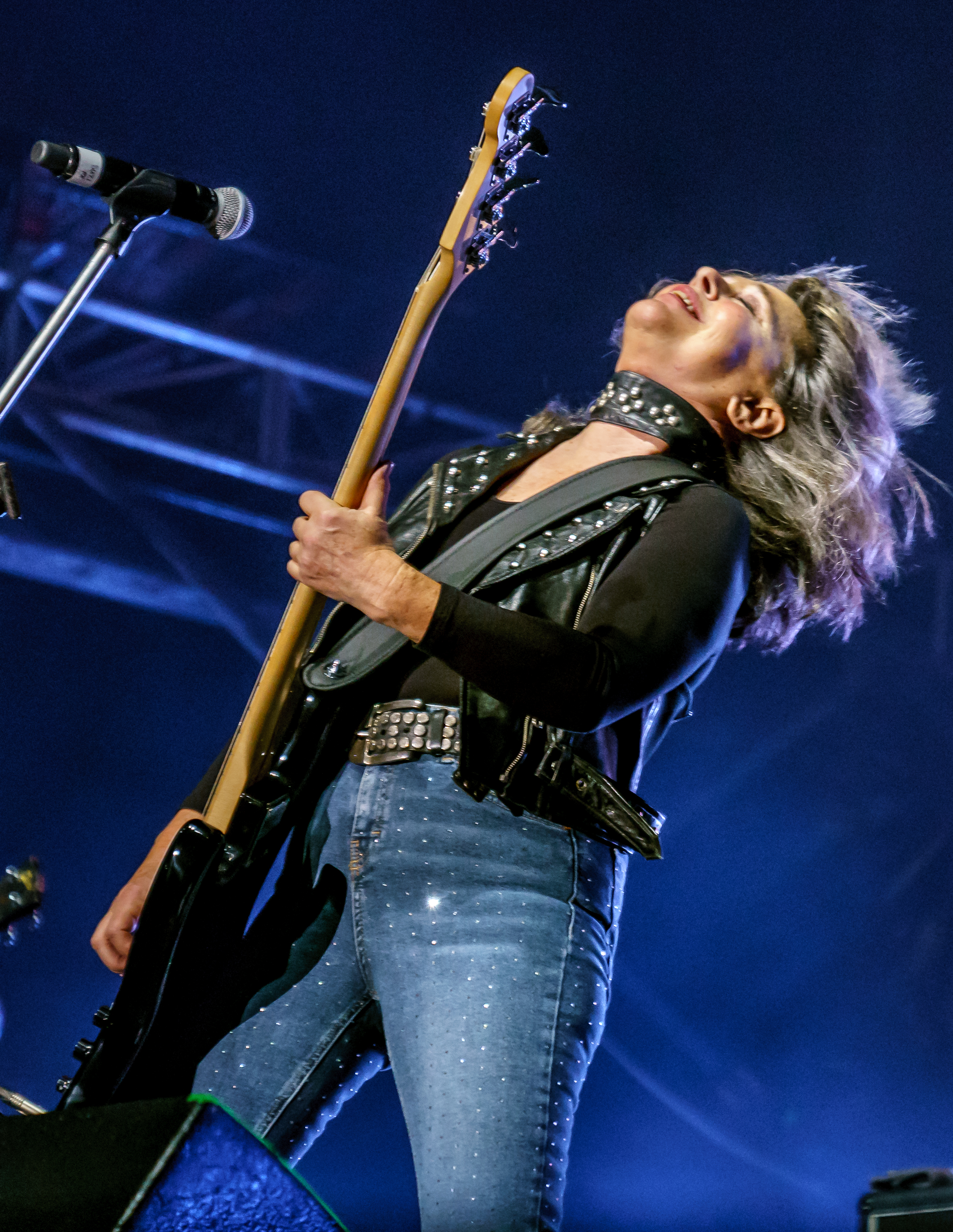 WiMN: Recently you have been campaigning to your fans to write the Rock n Roll Hall of Fame encouraging all of us to demand your induction (which is long, long overdue). While other inducted artists who have come after you, and have credited your influence to their success are being inducted, you have heard “radio silence” from RRHOF. Has there been any progress with this?

SQ: All I did was point out the obvious. This organization, if it’s worth salt, should be honoring the first female musician and singer to have world wide success. There was a seven year gap before anyone else came along. I was silent for a long time and now, I’ve said my peace and that’s that. It’s up to them to put it right – I won’t be speaking on it again. I begrudge absolutely no one who is in the Hall of Fame. Whoever is there deserves it. People have written in to the Rock n Roll Hall of Fame from all around the world, and apparently they have heard back that I may be now inducted…let’s see.

WiMN: While your solo music career began in England in 1971, it was your character Leather Tuscadero on the hit TV show Happy Days that helped to increase your American audience.  A character that debuted in 1977. Personally, that was my first introduction to you. I was 10 years old and remember being so mesmerized by your energy and presence on screen. It was also my first time seeing a woman rock out aggressively and without apology. How did that exposure influence your career in the U.S.?

SQ: Happy Days was a decision I made – and a great one. It made me a household name in America. I already had established a name every else in the world. Then of course, the hit single “Stumblin’ In” with Chris Norman happened, which sold a million copies in the United States.

“Strange, how people don’t like you to step out of a box, do they? And I refused to be boxed.”

WiMN: What was your experience like having your own radio show on BBC Radio 2? Are you still doing a radio?

SQ: I was on the station since 1999, even being nominated for Presenter of the Year by Sony Radio Awards – pretty amazing stuff! I have since stepped down because I later found out that BBC Radio 2 were not playing any of my new material! Being a DJ was working against me. Four albums in yet nothing was suitable for the station. Excuse me?…what is wrong with this picture? As I said to my boss, “I am an artist, first.

SQ: I would say nothing except to believe in yourself.

Below is the Official Video for Suzi Quatro’s new single, “No Soul/No Control”: