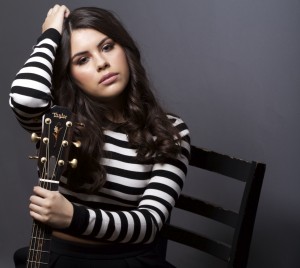 Catie Waters’ career is still young, yet she has already garnered great success. The Los Angeles-based singer-songwriter has a voice that goes beyond her years, channeling the soul, blues, and jazz greats such as Billie Holiday, Amy Winehouse, and Erykah Badu.

With her debut album, Stone Child, released in 2013, Waters is back in the studio working on new original music. In between recording her album and performing shows, Waters has been posting some of her favorite covers with her own unique twist to her YouTube channel, giving her fans something to hold onto before her new music is released. Find out more about Waters and all that is to come this year by visiting her official website and Facebook, and read the interview in full below:

WiMN: Who are your biggest musical inspirations?

CW: There are so many. Music is my life and there are a lot of artists that have touched my soul and given me inspiration. However to name a few: Amy Winehouse, Billie Holiday, Ella Fitzgerald, Lianne La Havas, Ella Eyre, Regina Spektor, Missy Elliot, Janelle Monae, and Jennifer Hudson.

WiMN: When did you realize that you wanted to be a musician?

CW: I have known my entire life music is what I’ve wanted to do. I started singing and learning music at a very young age.

WiMN: How has YouTube helped connect your fans with your music?

CW: YouTube and social media in general is a great tool to connect with my fans. It makes it easy to communicate with fans from all over the world. I appreciate YouTube and the other platforms that make it possible to share my music!

WiMN: What are some of your hobbies outside of music?

CW: I love reading books – you can live a thousand lives through the pages of books. I also started acting about a year ago, and it’s another beautiful form of artistry that allows me to tell a story, as does music. They are both incredible styles of creative expression.

WiMN: What is one of your favorite performance memories?

CW: One of my favorite performance memories was when I did a show for the American Dreamers benefit concert and opened for Jon Huertas. We did the show in the warehouse district in L.A. and a lot of people came out to support the cause. It was a cool vibe, but most of all, it was a performance to benefit a great cause.

WiMN: What’s the best piece of advice you’ve ever received regarding the music industry?

CW: The best piece of advice I’ve ever received regarding being in the music industry is to be myself. There are so many wonderful artists and musicians, but there is only one ‘you.’

WiMN: What are your plans musically for 2016?

CW: Right now I am spending a lot of time in my studio writing and creating new music. I will be traveling and doing some shows later in the year. I am also doing a few great collaborations and releasing a new single soon. There is a lot in the works, so stay tuned!