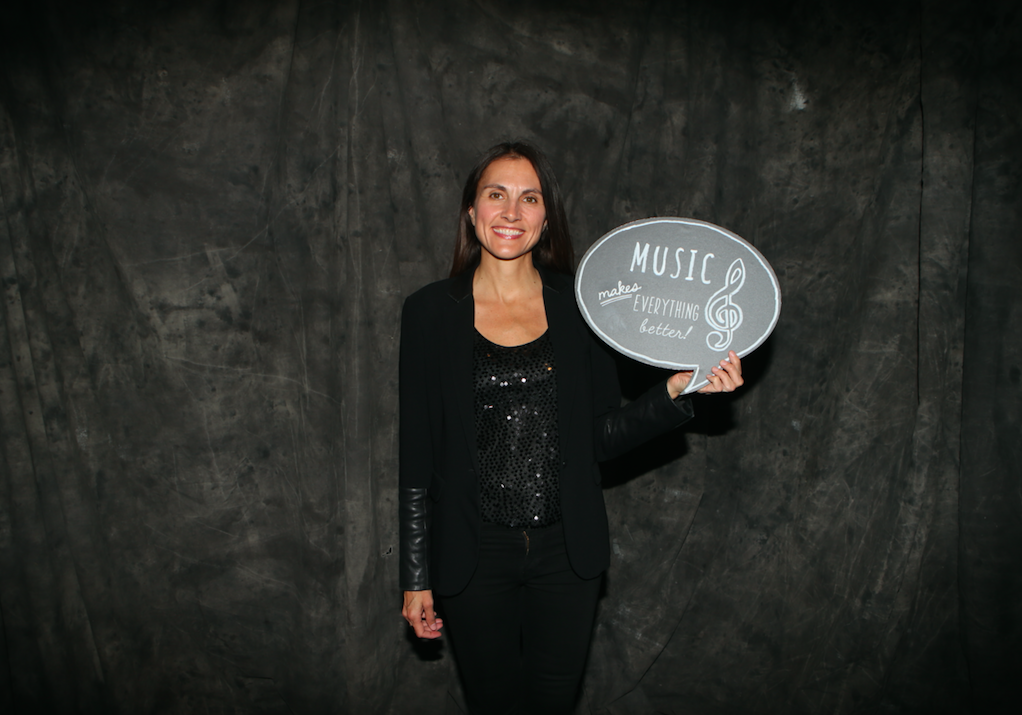 With more than 10 years of experience in marketing, publicity, artists relations, licensing, and more, Eaddy has been pivotal to developing impressive campaigns for companies like PRS Guitars and her current employer, Roland Corporation U.S.

During her years with PRS, Eaddy helped produce the company’s section of the Smithsonian Channel program, Electrified: Guitar Revolution. She was also responsible for managing licensing agreements between PRS and the wildly successful video game, Guitar Hero, all of this while managing the company’s magazine, their Signature Club loyalty program, and more.

Learn more about this marketing powerhouse in our interview below, and visit www.rolandus.com for more information on the company she proudly represents.

WiMN: Where are you from originally?

RE: Maryland feels most like “home” to me, but I was born in South Carolina. My family moved to Maryland when I was two, and I lived in the state for more than 25 years. So, steamed blue crabs, the Chesapeake Bay, the wild ponies of Assateague Island, Thrasher’s French fries, and Fisher’s caramel popcorn are part of my DNA.

One of my first memories is of my dad letting me try an oyster right off the grill in our back yard in Salisbury, the small town on Maryland’s eastern shore where I grew up. Back in those days, my mom and I would sit in the back of my dad’s pickup truck in beach chairs while he drove us to the beach. The Eastern Shore is a magical place for a kid. If we weren’t on our way to Ocean City, we were heading to Assateague Island with a caravan of 4x4s, parents, and kids for a bonfire on the beach, or we were watching crabs race at the Crisfield Crab Derby, or watching wild ponies swim from Assateague Island to Chincoteague Island. I live at the beach in Southern California now, and I still have to remind myself that the ocean is west out here.

WiMN: What attracted you to the world of marketing and communications?

RE: Music drew me into the world of marketing and communications initially. I was inspired by a very talented group of artists living in Annapolis, Md., who were musicians, painters, poets, writers, and the like.

I interned at WRNR, a cool indie radio station in Annapolis recommended to me by that group of artists, during my senior year of college. I loved being a part of the marketing mix that supported the indie music scene in town. I wasn’t a graphic design major, but I rolled up my sleeves and created some pretty far out fliers for station events and learned more about the broadcast advertising and sales processes. That led to my first job out of college at CBS Radio in Towson, Md., which led to management positions at two advertising agencies and later to PRS Guitars.

The world of marketing and communications ultimately gives me the opportunity to work in a space where business and creativity intersect. Beyond music, I have a passion for storytelling, strategy, design, words, and data crunching, so it’s a perfect place for me.

RE: I’ve always loved to sing and performed as a soprano in regional select chorus groups in my teens. These days I can, on the very rare occasion, give myself goose bumps singing something particularly well in my car, but I mostly have fun making myself laugh when I belt out a clam. My range is narrow but singing is something I sincerely enjoy.

The first musical instrument I ever learned to play was clarinet, in third and fourth grade, and I got a little pink keyboard for Christmas a year or two later. I taught myself how to play “Lean on Me” on that keyboard, and then later tricked my parents into thinking I was playing the demo that came on it. The first instrument I purchased on my own was a used electric guitar from a cool store in the Washington D.C. area called Atomic Music. I actually bought a tiny amp, the guitar, and a distortion pedal all for $100. I used to strum along with artsy movie sound tracks and Portishead tunes for fun to try to teach myself how to play. But playing guitar is so much harder than it looks! Some people make it look so effortless.

I’m embarrassed to say that I got frustrated early on because I didn’t immediately become a guitar prodigy. I was so quick to pick up most other things in my life like sports and academics, but guitar was such a challenge. I’ve promised myself I will write and perform one original song on guitar in my lifetime. I love melodies, lyrics, and words, and I’ve co-written lyrics to a few songs, but I haven’t dedicated enough time to learning an instrument to consider myself a musician. I know the time will come eventually, though. Music is in my soul for sure, and it will find its way out.

WiMN: How did you get your foot into the music industry?

RE: I met an amazing group of artists and musicians when I was a senior in college. Through them I was introduced to several people that worked at Paul Reed Smith Guitars, including Paul Reed Smith himself. Paul would often sit in with local bands who played regularly in downtown Annapolis. I’ve always been extremely passionate about music, and that passion, along with my previous marketing experience, and my being a part of that live music scene, helped me get my foot in the door at PRS.

WiMN: What did you do at PRS and how long were you with the company?

RE: I was a manager on the PRS Guitars marketing team for nearly six years. In my role there I focused heavily on advertising and media relations, but I wore many hats working on projects that brought visibility to the brand.

I helped produce the PRS section of the Smithsonian Channel program, Electrified: Guitar Revolution. They shot a portion of that program onsite at the PRS factory in Stevensville. When Guitar Hero approached PRS, I handled the licensing arrangements and the build-out of the guitars featured in the game. I also helped launch and managed the official PRS magazine, Signature, and the PRS Signature Club loyalty program.

WiMN: What are your primary responsibilities at Roland Corporation U.S.?

RE: I focus on publicity, advertising, and social media in support of new product launches and events, but I’m very involved with product placement, artist relations, and have been spending more time offsite at company events the last two years. Roland generally launches 30 to 40 new products each year and participates in 20+ events around the U.S. annually, so we stay pretty busy.

Most recently I attended the Bridges benefit hosted by the Children’s Music Foundation. Roland helps them raise money to reach at-risk kids with transformative music programs. A few weeks earlier, I was backstage with the Roland and BOSS team at the American Country Music Festival for a Cause giving VIP musicians a chance to check out our new gear. It was awesome to see the musicians letting loose on instruments they don’t typically play, and going gaga over some of the new gear. The musicians went bananas over the new BOSS SY-300 guitar synth. Just about every musician either laughed out loud or shouted something explicit when they first gave it a go. And the musicians were so happy to have the chance to jam and improv on gear that they don’t typically play, and to collaborate with their musical peers in ways that they never have before. They were really inspired and grateful, and the music they were making was incredible.

There is never a dull moment at Roland, that’s for sure, and I get to work with lots of talented people who all love music as much as I do. That’s pretty amazing. The number of new product launches for us this year will be 200+ when you factor in the debut of the premium BOSS and Roland accessories lines. We’re in major growth mode right now, and it’s an exciting time for the whole Roland team.

WiMN: Have you noticed any trends that are favorable for women in music since you began your career in M.I.?

RE: It seems like there are more women product specialists and clinicians in M.I. than when I first started in the industry a decade ago. My guess is social channels like YouTube and Facebook have helped the ladies break through and make better inroads. It’s been subtle, but it’s been nice to see the shift.  And what Laura Whitmore, Pauline France, and the team at The WiMN are doing to keep the ladies connected and inspired is pretty incredible.

WiMN: If you could give advice to your younger self, what would that be?

RE: I would tell my younger self to remember to take a few minutes each day to reflect on the smaller bits of progress I make on a daily basis rather than getting upset about the things I wasn’t able to complete. And that marketing is one of the most creative and fun career paths a person can take. Keep that top of mind, even when the “To-Do” list wraps around the block and everything was due yesterday.

WiMN: What is your favorite song to sing at karaoke?

RE: I think it would depend on my mood, but if I was happy, I’d probably lean toward something silly from the ’80s like Cyndi Lauper’s “Girls Just Wanna Have Fun,” or something sweet like Bob Marley’s “Three Little Birds.” If I was feeling sappy, something like Death Cab for Cutie’s “I’ll Follow You Into the Dark.”

The song “Girls Just Wanna Have Fun” was actually the first 45 I bought with my own money back in the day, and Ben Gibbard from Death Cab is one of my favorite singers. His voice and lyrics mesmerize me. And Bob is just the man!

RE: I don’t really have a favorite quote, but one of my favorite song lyrics of all time is the opening of Jeff Buckley’s song, “So Real.”

Love, let me sleep tonight on your couch
And remember the smell of the fabric
Of your simple city dress

When I think of this lyric, it reminds me to be present and to seek out the joy in life’s minor details.