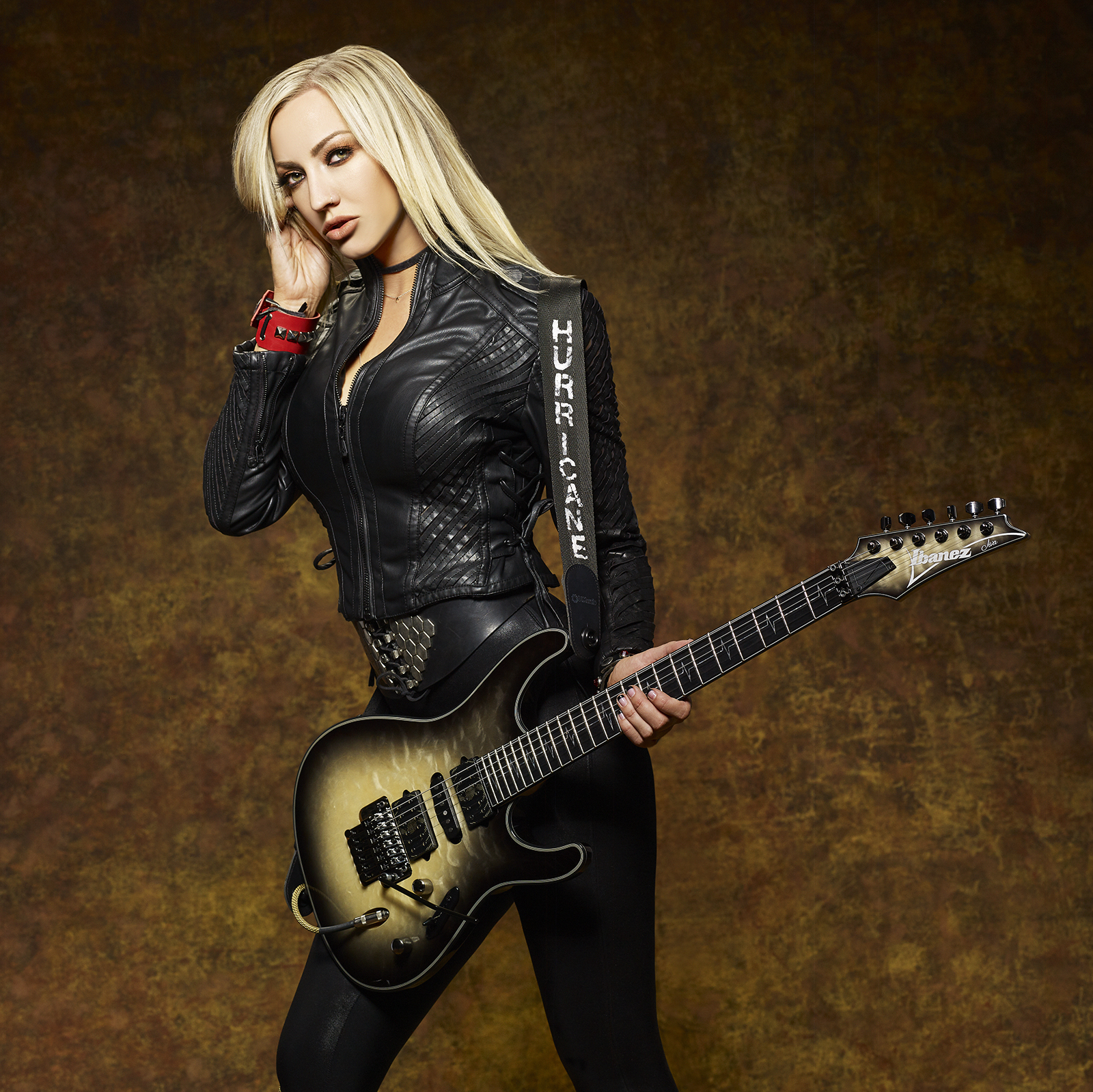 Ibanez guitarist Nita Strauss has literally shredded her way through the last several years making an international name for herself. The Los Angeles born musician began her early years in bands like Femme Fatale, the all-female tribute band The Iron Maidens, and video game super group Critical Hit. She has toured with R&B star Jermaine Jackson (Jackson 5), and recently wrapped up a 4 year tour with metal rock legend Alice Cooper. Adding to her list of accolades, Nita was also the official in-house guitarist for the LA KISS, the arena football team owned by Paul Stanley and Gene Simmons of KISS.

Widely known as ‘Hurricanita’, she kicked off her 2018 becoming the first female artist to have her very own signature Ibanez Guitar, and launched a Kickstarter campaign to crowd fund her very first solo album which released in November 2018 titled, Controlled Chaos. Strauss has wowed fans across the globe playing in the UK, Europe, South America, Asia, Australia, and Africa.

Her mad guitar skills and magnetic stage presence have earned her several endorsements including Ibanez Guitars, Marshall Amplification, DiMarzio pickups, Monster Energy and more. She is also an accomplished clinician, having completed extensive clinic tours across the world. Strauss, who has performed in previous She Rocks Awards shows, and even co-hosted one year with founder Laura B. Whitmore, will finally become a recipient of an award herself at the 2019 She Rocks Awards in Anaheim, California during the NAMM Show. You can purchase your tickets for the show here.

Strauss carved out enough time during her energy-charged schedule to talk with the WiMN about her first solo album, receiving her first ever signature guitar, and how becoming sober, incorporating healthy eating habits and disciplined workouts have fueled her ability to tour so consistently over the years.

WiMN: 2018 has been quite the year for you, Nita! To start, you are the first female to have a signature Ibanez guitar (Ibanez JIVA) and signature DiMarzio pickups (Pandemonium). Congratulations on these! Did you have input on the design of your Ibanez guitar and pickups?

NS: Thank you so much! Yes, the design, materials and sounds of the guitar and pickups were my own. I’m very grateful that Ibanez and DiMarzio allowed me to realize my vision so completely and bring my dream guitar to life.

WiMN: To continue the congratulations, you recently released your first solo album Controlled Chaos – completely crowd-funded which you produced, played bass and guitars, and did the majority of the engineering. In fact, you reached your Kickstarter goal within 2 hours, and then tripled your goal by the next day (800% over goal funded). Did you ever expect this kind of support for your first album?

NS: I don’t think anyone could have expected that!! I hear over and over that rock music is dead and that no one buys records anymore, so it’s truly a testimony to the fact that if you build a strong community and work hard on making great music, people will care.

WiMN: Was music your first passion? At what point in your life did you decide that playing guitar would be your career?

NS: My first passion was sports. I was a competitive athlete growing up. It wasn’t until I saw the movie Crossroads that my life took a sharp turn and I fell in love with the guitar. As soon as I started playing, I knew it was what I was meant to do.

WiMN: Your skill and personality with the guitar is truly captivating. As a woman in the rock music industry, have you ever experienced challenges or hurdles due to your gender?

NS: I have of course, but it was never something I put much thought into. I think if I had given it power, it would have overtaken me and discouraged me. I always kept my head in the game and tried to outwork anyone who doubted me.

WiMN: You toured with Alice Cooper for over 4 years, and are currently on a national tour to promote your solo album. How do you keep yourself on your A game to perform night after night?

NS: It’s the life I’ve always wanted, so it’s easy to bring out the big guns every night. I want to perform my best because I love what I do. Taking better care of myself has been the best thing I ever did for my touring schedule. I work out every day and I have my meals delivered weekly on tour by a company called Trifecta Nutrition. Having healthy food to eat has made a huge difference in my performance and overall feeling on the road.

NS: You recently became sober from alcohol and were very candid on why you went sober. Again, congratulations on this important change in your life. When did you realize that drink excessively no longer served a purpose in your life?

NS: Thank you. Sobriety is definitely the best gift I ever gave myself. I guess I didn’t really come to that realization until I stopped completely, and realized the strength and confidence that alcohol gave me was already in a reserve that I could tap into inside myself.

NS: I love to cook! I have more recipes saved on my phone than any other musician I know. Maybe I’ll put them all in a book someday.

WiMN: Congratulations on your She Rocks Award! You have performed for us in the past and have co-hosted. How does it feel now that you are a recipient?

NS: It’s a massive honor to be recognized by this incredible group of women. Every time I’ve attended the awards, I have been so inspired by the stories of the other recipients. So to see my name on that list is truly an honor that I don’t take lightly.

WiMN: And finally, do you have any advice to share with other female guitarists for being successful in this mostly male-dominated industry?

NS: I think my best advice would just be to embrace who you are. Don’t try to fit into any mold you think fits in this industry. Just be yourself, play with passion, and outwork everyone else in the room. The rest will follow.