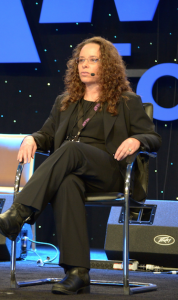 Jenny Amaya has music in her bones. Having been influenced at a young age from hearing music played constantly in her childhood home, learning violin and accordion at 10, and composing her first piece of music by 8th grade, she soon became interested in music technology.

It’s no surprise that Amaya has had such a successful career in the music industry thus far, because her passion for the products and the field she works within is unmatched.

Find out more about Amaya below in this week’s Front and Center, and be sure check out MusicFirst, as well as her company’s website, The Commercial Music Lab.

WiMN: When did you realize that you wanted a career in music and how did you direct your passions?

JA: I realized I wanted a career in music pretty early on. I don’t know that I ever made a conscious decision that I was going to pursue a career in music; rather, I think it was more of a natural progression with no other option to consider.

I began playing music at age 10 (violin and accordion), eventually I began playing trumpet as well, and I composed my first piece of music as an 8th grade student, which was performed by a small ensemble at my junior high. I continued composing through high school, and studied notation and orchestration with my freshman-year band director. He moved away after my freshman year, so I would snail-mail my scores to him (this was before the Internet), and he would mark them up and send them back.

I also started using music technology and working with music products while in high school – Passport Design’s Encore for notation, and Master Tracks Pro for sequencing. I won several “young composer” awards during high school, including three Disneyland Creativity Challenge awards for composition – all of which propelled me into a career in music.

I met some representatives from Passport Designs while I was a junior in high school, and the company signed me up as an endorsee, put me in many of their ads, and asked me to appear at their booth at the 1996 NAMM Show. I discovered at my first NAMM Show, as a senior in high school, that I had a passion for sharing my knowledge of music software with others, and I loved running product demos in front of audiences. I was only supposed to show up and say hello, but I ended up hanging out at the booth, passing out literature, and jumping on stage every hour or so to run all of the Encore demos, for four days straight. I was absolutely hooked. I also met my future husband, Alex, at that NAMM Show, as he was the direct sales manager for Passport, and it basically became the two of us, hanging out together and running the booth.

I continued working for Passport as a freelancer, worked a few more NAMM Shows for them, and even worked tech support part-time, remotely, for them, until their demise in 1998. By that time I knew quite a few people in the music software world, and fortunately one of them moved on to Sibelius from Passport, and brought me on board as a freelance rep for Sibelius. I spent many years working a variety of gigs for Sibelius – NAMM Shows, a lot of west coast music education conferences, teacher in-service trainings, and private instruction for industry professionals in the Los Angeles area.

I did all of this while completing my music degrees (and nearly completing a teaching credential in music, as well). I have a bachelor’s degree in music composition, I spent some time completing a MIDI and audio recording certificate at a community college, and then I went on to complete a master’s degree in commercial music, with emphasis in composition and arranging. During my first quarter as a graduate student, I was invited to teach technology at Riverside City College, and shortly thereafter I was teaching Sibelius at UCLA extension, as well.

When Sibelius was acquired by Avid, I spent some time at a recording studio, taking classes and learning everything I could about Pro Tools and digital audio. I became Pro Tools certified at the expert level, eventually became a Pro Tools Certified Instructor, and I was able to set up Pro Tools certification courses at several local colleges. Back in 2011, after I had completed my degrees and training, I was working as an adjunct professor at about five different schools in the Southern California area, teaching music technology. I was also very fortunate to have become the Sibelius author at Lynda.com.

In 2012 I opened my own business, The Commercial Music Lab. It is a beautiful 6-seat instructional music technology computer lab, located in my living room. As much as I love teaching in my own lab, sometimes I just enjoy looking at it, too! Almost immediately after opening my business, I accepted a full-time teaching position at Cal Poly Pomona. During my time at Cal Poly, because I had developed and was currently teaching a series of Sibelius classes at my lab, I was asked to author the official Sibelius courseware for Avid’s new Sibelius Certification.

I have since authored two books for Avid, and am in the process of helping them train additional Sibelius trainers around the country. I continued teaching at my lab on weekends and during the summer months, and I was doing well at Cal Poly Pomona, but my heart was being pulled into the products industry. I continued to attend conferences as a clinician and exhibitor, in a variety of positions, and I had my eye on a small little company called “MusicFirst,” as many of my colleagues at Sibelius had started working for MusicFirst, and MusicFirst was also acquiring some of the old Sibelius educational products that I loved.

The short version of the story is that I expressed my interest in working for MusicFirst at TMEA, early in 2015, and I accepted a full-time position with them a few months later, in August.

JA: I love everything about MusicFirst, but I’d have to say that my colleagues are the best part of my job. We have the greatest team of people at MusicFirst that anyone in music educational technology could possibly dream up. Everyone has something special about them that they bring to the team, we all genuinely love our company and the products we represent, and we have the utmost respect for one another. It’s an exciting time to be a part of a growing company like this, and I feel so fortunate, every day, to have been given this opportunity.

A close second would have to be the products. I love music education, technology, and software, and I can’t think of any other job where I can combine all of those passions into one. Not to mention, I get to continue exhibiting and running sessions at conferences – I have never stopped loving that part of my life.

WiMN: What do you enjoy the most about teaching and presenting music tech demos?

JA: I just love showing people the right way to work with music technology, giving them ideas for how to use the technology, and getting them excited about trying it for themselves, or being able to help them with any questions they have or issues they may have faced that have hung them up. I like motivating people to use a product. I know what these products have done for me and my life – I know they can do great things for others, particularly for young music students. I just want to see them have the same chance I had, and being exposed to music technology tools at a young age.

WiMN: What are your hobbies outside of your professional life at MusicFirst?

JA: I work a lot, even outside of MusicFirst. I am teaching one class a week at Riverside City College, I am continuing to work with Avid and Lynda.com to develop courses for Sibelius 8, and I am also continuing to train teachers and professionals at my lab and elsewhere, on Sibelius and Pro Tools. I’ve been trying to finish a large musical project for years, which I’d like to find more time for. Mostly, though, my release from work and music comes from spending time with my husband and our very large family of animals – we have a great dane, two saint danes, and a horse! There is never a dull moment around our house, and always plenty to do.

WiMN: Who are some of your favorite bands/musicians and why?

JA: I have the weirdest musical influences. When I was growing up, my mom would play music every night. We lived in a fairly small home, so I couldn’t really escape it. Since I kept hearing her music over and over again, I ended up adopting and appreciating many of the artists she loved, rather than being attracted to all of the latest and greatest artists of my generation. She enjoyed humor, and would listen to artists/bands like the Smothers Brothers, Peter, Paul and Mary, and The Monkees. She’d also listen to some greats – Neil Diamond, Elvis, Linda Rondstadt, Whitney Houston, etc. (I could go on and on).

At the same time, my older brother brought in influences like Guns and Roses, ACDC, and Michael Jackson. And sure, some friends exposed me to Madonna and some boy bands. But for some reason, I really took to Barry Manilow and The Monkees – they became two of my favorites. On my own, I loved Disney soundtracks and wind band music. Weird, right?

WiMN: Who has been your biggest inspiration in your professional career?

JA: There are so many people who deserve to be named here, so I can’t possibly single any one out. I have been absolutely blessed to have had some of the greatest mentors in my life, as well as people willing to give me a chance in this business.

WiMN: What is the best piece of advice you have received regarding working in the music industry?

JA: Be really good at something you love – and do that.

WiMN: What has been your greatest professional accomplishment thus far?

JA: I think just making a solid living in the music industry, doing things that I love, and working with wonderful people I admire – that’s an ongoing accomplishment.

WiMN: Have you ever faced hardships for being a woman in a male-dominated industry?

JA: I’ve been pretty fortunate to be surrounded by good people who have respected me. I would have to say that my overall opinion is that women have to work harder and prove themselves quite a bit more than men do in this business in order to be taken seriously. That said, it’s never really bothered me, and it definitely hasn’t gotten in my way. I’ve always been the type of person who works hard and is constantly trying to be the best I can be. If you do the best work, you’ll get ahead.

WiMN: Where do you see yourself professionally in 10 years?

JA: This industry changes so much – I really have no idea. But I hope that wherever I am, I love my profession, my company, and my colleagues as much as I do today. 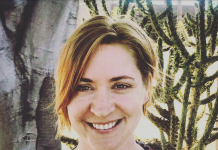 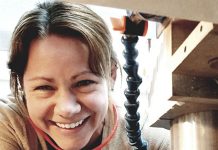