Militia Vox is shattering the stereotypes for women of color in the music industry. As an award-winning singer, songwriter, musician, visual artist, director, and producer she takes on every role personally to ensure her art is represented exactly how she envisions it to be. Vox is originally from Maryland and currently lives in NYC. She describes her music as alternative metal with a tinge of urban goth; a progressive, modern take on dark and heavy music. Vast, cinematic, and furiously feminine. Vox has learned to play a variety of instruments including the saxophone, drums, guitar, bass, and is a classically-trained pianist. Not only a solo artist, she also leads a heavy metal all female tribute band Judas Priestess! You can view a video at the end of this interview below.

Vox has recorded, toured, and performed with several icons in the industry that range from Cyndi Lauper to Nancy Sinatra, and Sandra Bernhard to Living Colour. Plus, she has been featured in several books on music, speaks at colleges and conferences, and models for Manic Panic alternative hair color and cosmetics.

Militia Vox shares with the WiMN what fuels her passion and drives her music to the forefront of the industry.  Her new single, “AIR” releases everywhere August 18. You can learn more on her website militiavox.com.

WiMN: As an award-winning singer, songwriter, musician, visual artist, director and producer, how do you find balance when wearing so many hats in this industry?

MV: I don’t find balance, I find extremes. I tend to work obsessively fixated on one aspect at a time, burning the candle at both ends until I make what I need, then the pendulum swings to something else. It’s a deranged hyper-focus. On the surface it probably resembles ADD, but I wear all these “hats” because I kind of have to… and know I can. Also, I don’t want to have to compromise or explain myself all the time. I’d rather just DO. I have to visualize it, mold it and make it real. But it’s all for a greater cause – to serve ’the muse.’ 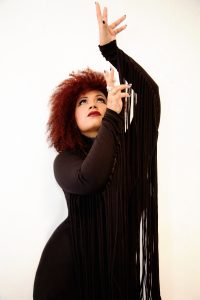 WiMN: You have performed with quite a variety of iconic artists like Cyndi Lauper, Nancy Sinatra, Twisted Sister, Living Colour, Candlebox, and L7. What was the fan reception like performing for such a diverse audience each time?

MV: I’m responsible for connecting with whoever I’m performing with and anyone watching- my job is to make it great and memorable. I’m just a channel to embody and deliver the sound, vibe and attitude whatever the style or the audience may be. It’s humbling and triumphant to work with my childhood idols and artists that I have learned from and deeply respect…(Some may not even realize that!) I now get to see them as peers and friends and they continue to amaze me. Even though the audiences may vary, ultimately, we are all merely music addicts.

WiMN: Your performance platform has ranged from plays to musicals to film. How is your experience unique on each level?

MV: I’ve been very lucky to perform in a wide-range of mediums and productions: Host/VJ on Fuse, MTV2 and Vh1, Broadway productions, indie films, bands, orchestras, directing, DJing, studio recordings, hosting festivals and events, pro-backup singing, modeling, voice overs, creating my own one-woman shows… I enjoy having a huge range of motion and I get off on the challenges. That’s how creative growth happens.

Years ago, I came to the harsh realization that most entertainment gigs for black females revolve around stereotypes that I’m not ok with, and that pure heart, talent and drive were not always enough to win. This is where my motto “DISGRACE YOUR STEREOTYPE” comes from. Being a mixed race female, my “type” hadn’t really been seen much in theatre, TV or film until just recently- thanks to the natural hair movement and miscegenation. (Which is bullshit, because the arts are supposed to be progressive.) It’s been difficult at times to deal with some people’s assumptions on what my “type” is capable of. Honestly, that whole thing makes me sick.

We are just starting to see ‘the ethnically ambiguous’ more and more these days, because people finally acknowledge that’s where the world is headed. This is what pushed me make my own music and visuals, just to have a voice, an outlet and some goddamn representation. I’ve accepted that I’m a subversive person.

WiMN: Women are vastly under-represented in the music and film industry. What are you doing specifically to push your music to the forefront?

MV: I do my damnedest to make everything I create the best and most interesting it can be- the music, the lyrics, production, visuals… and then share it with those I think will appreciate it, or have shown they appreciate it. Lately, I’m doing more mixed media performances: speaking, screening my visual art and then performing live at colleges, theaters and film festivals. Recently, my videos have been shown at film fests and even won awards, such as “Best Avant Garde Video” in the LA Music Video Awards – which is very cool. I’m also licensing my music for movies, TV, commercials and podcasts.

WiMN: Do you play any musical instruments? What is your music background?

MV: My first instrument was piano at age 8. I studied privately and at music conservatories. Classically trained and I excelled – winning state and regional competitions into my early 20’s. Then, I got into my first industrial band and all hell broke loose! I also dabbled in saxophone, drums/percussion as a teen. Eventually, I picked up bass and guitar because I wanted to play something that was easier to carry and more rock ’n’ roll.

WiMN: Have you ever experienced discrimination as a woman in the music industry? If so, how did you overcome those obstacles?

MV: Of course. I just steamroll it because I have work to do. As long as my missions get accomplished, I’m good. I don’t waste time with people who can’t see past their own limited judgments and I refuse to be treated unfairly.

WiMN: Lastly, do you have any advice you can offer to women who are interested in working in the music industry?

MV: You’d better love it. And it takes vision. Nothing happens without these.

Below is a live reel video for her tribute band, Judas Priestess! 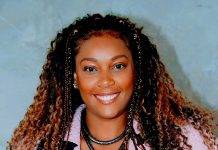