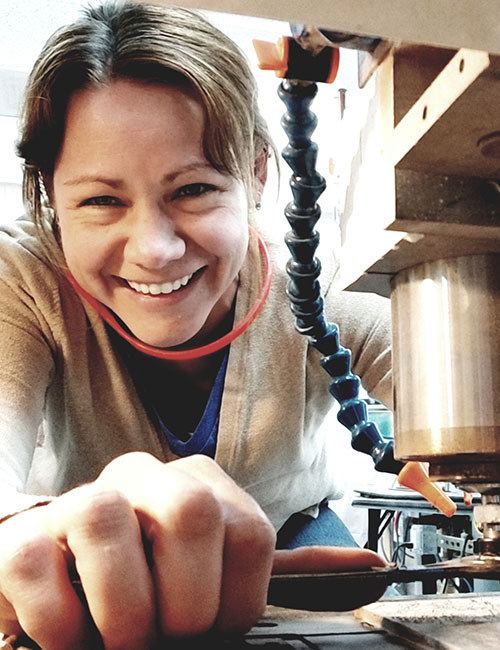 Guitars are beautiful in their simplest form, but with the extra touch of delicate inlay work, they can become true works of art. The folks at Aulson Inlay know this, especially designer Jaime Aulson.

Based in Maryland on the shore of the Chesapeake Bay, Jaime has worked on guitars for Jimmy Buffett, Crosby, Stills and Nash and John Mayer, and has collaborated with legendary guitar manufacturers like Martin Guitar and PRS Guitars. In this week’s Front & Center, she discusses some of her favorite projects, working in a family business, and much more.

To find out more, visit aulsoninlay.com.

WiMN: How did you get into inlay work?

JA: Growing up, my father, Doug Aulson, owned his own business automating machinery. One of his many customers was Larry Sifel of Pearl Works in Mechanicsville, MD. Doug built Larry’s first CNC machines which helped him revolutionize the inlay industry.

I started working for Larry when I graduated from Salisbury University in 2002 with a graphic design degree. My first job was helping put epoxy in the 2002 PRS Guitars Dragon. Studying computer-aided design (CAD) at the College of Southern Maryland and having Larry as a mentor led me to program and manufacture the 2005 double neck PRS Dragon. I enjoy using art and engineering together, as well as working with my hands—a job I didn’t even know existed was a right fit for me.

WiMN: How does your background in graphic design influence your work?

JA: When I told Larry that I could scan all our materials in the computer and render the 2005 Dragon in Photoshop before we even cut a part, he wasn’t sold on the idea. But he let me do it and set up my first meeting with Paul Reed Smith who has been a friend and mentor ever since. To this day we render all our projects for approval. This has saved us countless hours of reprogramming or remaking parts.

WiMN: Can you tell us about some of the coolest guitar projects you’ve worked on?

JA: I have been fortunate enough to work with Dick Boak at Martin Guitar on signature models for Jimmy Buffett, Crosby, Stills and Nash, and John Mayer to name a few. When Aulson Inlay first opened, we designed C.F.Martin’s 180th-anniversary guitar and the PRS Brush Stroke Birds. The most extensive and intricate was the 2015 PRS Dragon.

But by far the coolest project I was involved in was made by my employee, Lauren Hook. It was her first solo project named “Guitar of the Gods” for PRS. She designed it along with the customer, programmed it, and manufactured it herself. The design and execution are amazing. The coolest part was sharing my knowledge and watching her learn and succeed. Not many people on this planet know what’s involved with a project like that since Larry passed away. It’s so cool to share that with someone else.

WiMN: How does living on the shores of the Chesapeake Bay inspire your work?

JA: We are fortunate enough to have a view of Mill Creek from the shop. We try to take a walk every day and get a view of the river and the bay to recharge. The name of our bracelet designs, “backwater breeze,” was inspired by our picnic table by the creek. And some of our best ideas have come from a boat ride or a drink at the tiki bar.

WiMN: Tell us about some of the other products you design inlays for.

JA: We have been working with a friend of Larry’s, Mike Dixon, to inlay his beautiful custom humidors. Our previous employee, Kacey Lloyd, has started Kaygey Caps. Along with her boyfriend, Glyn, she is bringing the world of inlay to bicycles. We have also started using all of our scrap wood and shell to make charm bracelets. They are available at Minxes Trinkets, The Apple Basket, and Blairs Jewelry. We also sell one on our website where $10 go towards music in schools. From paddleboards to cutting boards, the possibilities are endless!

WiMN: What’s it like working in a family business?

JA: We have an interesting dynamic at the shop. My mother, Ellen Aulson, uses her skills learned from years in the corporate world. She does the books, shipping, ordering, and countless other crucial things behind the scenes. My father, Doug, builds all our CNC machines. He up keeps all the equipment in the shop, and he is our head machinist. I do a lot of design work, programming, and machining. So basically we have no idea what anyone else does, haha! I think this helps us because we can’t try to micromanage each other.

It was also a perk to have my son, Jackson, in the shop for his first year. He has the best water view office of course. He now comes after daycare and Grampa is already teaching him how the shop works.

WiMN: Has there ever been a time in your career when you felt discriminated against because of your gender? If so, how did you overcome it?

JA: There were times when I felt people around me were waiting and hoping for me to fail. Maybe because I was young, a woman, or the boss’s daughter. But I put my head down and worked my ass off. It wasn’t too bad because I enjoyed what I was doing. If anything, it taught me to double, triple check myself which has only helped me in the long run.

It was depressing when I realized that my name, Jaime, helped me a lot in a male-dominated industry. Lots of times my first contact with customers or anyone in the field was through email. I had the opportunity to prove myself while they still assumed I was a man. I also received ongoing support from many men and women in the field. Dave and Nadine Nichols of Custom Pearl Inlay along with organizations like A.S.I.A. and G.A.L share information for anyone who is willing to listen and learn.

WiMN: Do you have any advice for young women looking to get into a similar field?

JA: I suggest finding something you like to do and become the best you can at it. Surround yourself with likeminded, positive people if you can. Find a mentor. There is a time to put your head down and work your ass off. There is a time to stand up for yourself. Life is too short to be in a miserable situation.