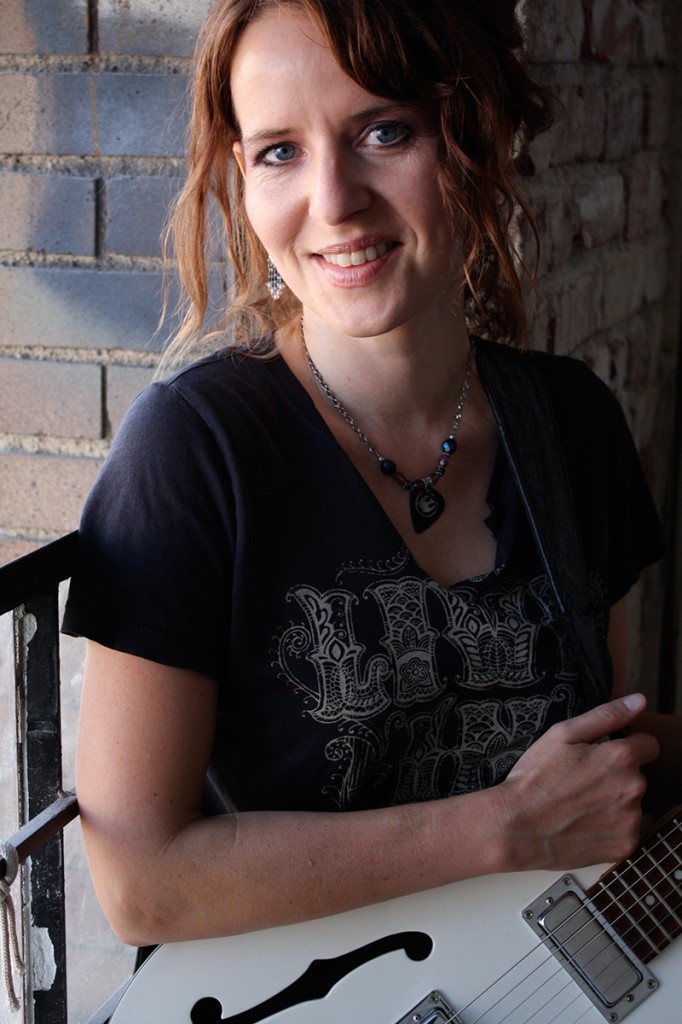 Written by O’Neill, Women’s Road to Rock Guitar is an instruction book that prepares guitarists for playing rhythm and lead guitar in rock bands, writing songs, using gear and dialing in their sound.

Ultimately, Women’s Road to Rock Guitar is a way for O’Neill to inspire female guitarists to explore creative frontiers and express themselves in exciting new ways. You can find out more about Nikki O’Neill and the book at womensroadtorockguitar.com.

WiMN: What inspired you to pick up the guitar and pursue music as your career?

NO: I spent my teens in Sweden where I attended a high school with a large focus on arts. I was a visual arts major, but felt a deeper connection to music, and I started eavesdropping on the music students’ rehearsals. I was mesmerized by the sounds, and playing music in bands seemed a lot more empowering and less lonely to me than painting.

Prince and Carlos Santana inspired me to pick up the guitar. I loved amplifiers, distortion, the way their guitars got a different “voice” through wah’s and other pedals. How they could sustain those long, wailing notes in their solos was fascinating to me. So I begged my mom for a guitar, and once I got an acoustic for my 16th birthday, I locked myself up in my room for hours, figuring out songs and solos from records and the radio. Music has been my life and career since then.

WiMN: Tell us about your book, Women’s Road to Rock Guitar.

NO: My goal for my guitar students has always been to get them into playing in bands and writing songs, and to show them the essentials so that they won’t need me. So my book covers those essentials: rhythm and lead guitar for different rock styles; how to create a tasteful solo and play on different parts of the neck; how to figure out songs by ear; common song structures in rock and how to write a song chart. It also has a little guide to the fretboard so that you see how your barre chords and soloing scales are connected.

I explain important music terms like bars, rhythms, major/minor, keys and dynamics. I also explain the basics on gear like guitar pickups and amps, and I demonstrate what different effects pedals do and what they sound like, because all that stuff seems to intimidate and mystify a lot of people. I want my book to help rock singers who want to pick up guitar; rhythm guitarists who want to play more creatively and start soloing, and lead guitarists who want to play solos with greater confidence and explore different approaches.

It was very important for me to feature a wide diversity of rock, contemporary and classic.  The riff section, for instance, covers everything from Albert King to T Rex, The Donnas, PJ Harvey, Iron Maiden, Jimi Hendrix, Kings of Leon, Black Sabbath, Funkadelic to The Smiths.

The book is laid out in a progressive order, where the concepts build upon one another. So you can either study it from cover to cover, or just pick up any random page to get new ideas and inspiration. There’s a lot of fun stuff in it to try out that will make you a very versatile and creative player.

WiMN: Can you tell us about some of the guest musicians that are featured in the book? What kind of tips do they offer?

NO: I interviewed Jennifer Batten, Kat Dyson, Sue Foley, Lita Ford, Kaki King, Ann Klein, Bibi McGill, Orianthi, Vicki Peterson, Ana Popovic and Nancy Wilson for the book, since I thought it would be great for the readers to get tips from successful female guitarists. Their answers revealed that they all have a sense of curiosity and commitment that got them to where they are, but also that they struggled with the same things that we all do.

I included their tips and insights to motivate you to work on your soloing skills; conquer those barre chords; learn how the fretboard works; develop solid rhythm; explore how to get totally different guitar tones with just your pick; condition your fingers for tapping; appreciate the sonic differences between electric and acoustic guitar; understand what deeper levels of musicianship are about; train your ear to hear really common chord changes in rock songs, and more. There are also some fantastic photos of these players in the book!

WiMN: Tell us about the all-female rock college in Sweden you participated in.

NO: The ELLA rock program is a two year fulltime music education for young women. It’s located on the island of Gotland, which is east of the Swedish mainland in the Baltic Sea, and the place is filled with Viking-era artifacts and dramatic scenery — it’s awesome!

Most of the students are between 18-25 and they come from all over Sweden, but since the school opened up to international students, they’ve actually had two students from Texas attend. Their goal is to provide a broad musical education but with a gender perspective, so the program includes instrument instruction (main instrument and other common rock band instruments), ensemble playing, song writing, music theory, audio engineering, music production, music business, and gender studies. When they flew me out there in May to teach four days of clinics, the students were just about to embark on a nationwide tour that they had planned and budgeted. It was their final project.

WiMN: Who are some of your heroes in the industry – musicians or otherwise?

NO: Jennifer Batten is not only a hero because of her formidable abilities on the guitar and that she’s toured with both Michael Jackson and Jeff Beck, but because she seems very ego-free and down-to-earth, and she’s been very encouraging with my book and given me some great career advice.

I was also really lucky to meet Lamont Dozier and to sit with him alone at a piano and hear him talk about all the great songs he wrote for Motown. To me, he’s as great as The Beatles. He has a humble attitude and spiritual perspective on where his ideas are coming from, but he’s very adamant about how you have to show up and write every single day, “or the muse won’t take you seriously.”

I have other people who I admire at a distance because I haven’t met them or never got to meet them: Quincy Jones; Prince, Michael Jackson and Sly Stone for their electrifying talent and stage presence and for bridging the gaps between black-white and male-female through music. I also admire artists like Mavis Staples, Bob Marley, Fela Kuti, Bruce Springsteen, and Tom Morello for their engagement in social justice issues.

WiMN: What is some advice you’d offer to a young woman pursuing a career as a guitarist/musician?

NO: Sometimes the best advice is not to listen to any advice at all, but ok, I’ll say a couple of things: Practice, practice, practice and get out and play with lots of people – don’t waste time procrastinating because you need these hours to develop your chops and identity as an artist.

Have the courage to develop in front of people — don’t let high standards hold you back. Hang out with supportive people. Don’t get swayed by opinions. Stay authentic and true to who you really are and learn to appreciate and cultivate what YOU’VE got to offer instead of beating yourself up for not having the same energy, singing voice, chops or ways of writing songs as your favorite artists.

Finally, don’t be afraid to stand out and be different, even if people around you might be following what’s hip, popular, mainstream or whatever, because everybody’s path is unique and the universe usually has more festive and expansive plans for us than what we’re able to conceive.

NO: Personally, I never think about being female when I play, and I’ve never seen my playing as a political statement… I just want to be good and serve the music. When I started out, sure, there were a couple of music teachers, musicians and audience members who made dumb remarks about me as a female guitarist. There were also a few incidents of sexist attitudes back when I worked in some non-artist aspects of the business, but these comments came from people who were bitter about their life situation.

Since then, I’ve never experienced any challenges of that kind. Times have changed and the younger generations don’t have those kind of hang-ups. I think people are best off if they spend time on developing a great chemistry with their instrument and on doing their thing well, but without playing like they always have something to prove. Living in Los Angeles has also showed me that it’s important to back up form with substance — you can’t just stand there and pose with a guitar and call yourself a “guitar goddess,” because that’s just corny.

NO: I wrote the book when I was in-between bands, so now that it’s out, I’m in the midst of forming a new band with my drummer. We’re looking forward to recording the music we’re writing and to put together a house concert tour. I just taught a guitar workshop over Skype to the Girls Rock Camp in Paris, France, which was a lot of fun, and right now I’m planning more clinics and workshops with other ladies/girls rock camps across the US and in Europe for 2014 and 2015. I plan to combine these clinics with solo shows, where I’ll be bringing my guitar, loop pedal and some other fun stuff.

Enjoy this article? Become a member of the WiMN today! It’s free, and you can signup here>>