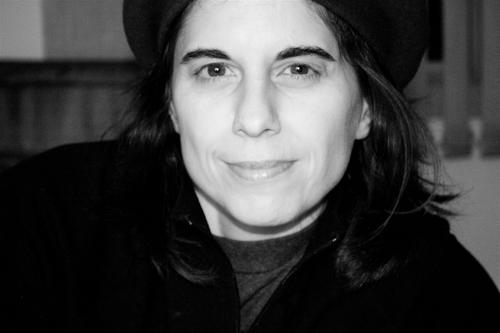 Lauren “L Pass” Passarelli from Paramus, N.J., is a guitar professor at the renowned Berklee College of Music in Boston, Mass. – and so much more.

She is a multi-instrumentalist, vocalist, arranger, recording engineer and record producer, and has worked with Cindy Brown, Pat Metheney, Melissa Etheridge, and many others.

She is the co-founder of Feather Records, Cotton Moon Music, Wizard and Feather Brown Productions, and PassaBrown Studios, writes and sings her own songs, has released 15 records, played George Harrison in a Beatles Tribute band, is a published book author, and the list goes on.

WiMN: You were the first female to finish the guitar performance program at Berklee College of Music. Did you ever feel like giving up? What went through your head knowing that you were the only girl guitarist graduating?

LP: There were many other women graduating in other majors who may have also played guitar, I was just the only woman guitar performance major in 1982.

I was often the only woman in my classes. I didn’t think much about it back then. I was so absorbed in learning and desiring more guitar, more recording and more songwriting. I met some great musician friends attending at the same time: Sarah Burrill, Cindy Brown, Lisa Goldstein Meri, Gina Felicetta Myrick, Missy Etheridge, Ruth Mendelson, Linda Poonarian, and Lucy Asforis, who were all fun and very supportive. Being the minority didn’t feel hard to me then.

WiMN: You were also Berklee’s first-ever female guitar instructor. Did you ever feel like students doubted your ability simply for being a woman? Explain.

LP: Some students actually did doubt me. But as soon as they heard me play, they changed their tune. “Can you show me how to do that?” I can’t blame them. I didn’t have any female guitarists acting as role models growing up. I wasn’t aware of or listened to  women artists who really played guitar well. I only knew what was on the radio and what my friends and I were listening to. For example, I didn’t hear Bonnie Raitt, Nancy Wilson and Emily Remler until the ’80s.

WiMN: Who do you feel supported you the most throughout your music education? Explain.

LP: My first guitar teacher, Lou Sabini, was always available to me. I could always call with questions and visit. My closest friends and collaborators (Stefanie Badach Mis and Cindy Brown) kept me emotionally strong with millions of encouraging words. My parents made it all possible by giving me lessons, instruments and an education. I wanted to attend Berklee since I was 11 years old, and it came true.

WiMN: How many female guitar instructors are there now at Berklee?

It was difficult being the only woman in the guitar department in 1984 at only 24. Berklee was a college, but atmospherically still more of a trade school then. The prevailing attitude among some faculty at the college and of a few in my department at that time was that only men can really play and students were attending to learn how to play guitar like a man.

I felt outside what was accepted and respected because I was a recent graduate working alongside my very own teachers, and because I wasn’t playing jazz. There were 24 mostly jazz guitar teachers then. I soon realized I was hired because of the variety I offered. I had to grow into the position. I felt like I could still be taking lessons. I learned the bigger truth, which is that we all can. We never stop learning and growing; there’s always more to understand and know.

WiMN: Do you feel like you paved the way for these female teachers?

LP: I don’t know how much I paved the way but I was proud to find out two days before I graduated that I was the first woman to finish the guitar performance program. It was also cool to be the first to join the guitar faculty two years later.

I had thought that it was a sure thing then that I’d be included in “Berklee: The First 50 Years” book, but I learned a big lesson. Speak up! If I had mentioned it to anyone compiling the info I’m sure they would have considered to include me.

(Lesson: Never assume, especially if you don’t have a manager or publicist. If it occurs to you, mention it, because it may not occur to anyone else.)

WiMN: How does the male/female guitar student ratio compare now to when you were a student?

LP: It’s much better now, but not 50/50. You’d have to check in with admissions for specifics over the years.

WiMN: What advice would you give women seeking to pursue guitar at Berklee or any music college?

LP: Do it! There’s a tendency with all humans to look for outside validation and really it’s our own inside validation that feels the best. There may not always be certainty when deciding such things, but any pulse, or desire, or feeling of fun, and curiosity, is worth following. You only have to please, amuse and impress yourself. You’re the one that you’re trying to reach.

LP: The wonderful performing artist, poet, musician, story teller, author and Irish scholar, Dr. Kate Chadbourne, said to me recently, “You should write an eBook.” She encouraged me and brought the idea into focus for me, and she was my editor.

(More lessons: When you’re used to making CDs only, do more research, and remember that editors get a credit in a book! I feel awful that I didn’t put her name in as editor. But she’ll laugh because I added some things to the text and found an error she would have caught had I asked her to read my addition.)

I had always wanted to write a book and been asked by countless students if I had books. This whole new world of digital media is making everything so much easier and more fun. So these bite-size eBooks are perfect for info on the go. It’s the first in my Guitar Insights series, and it has information based on the needs and fixes I find useful while working with my students.

Dr. Kate Chadbourne also suggested I write music to Emily Dickenson & E.E. Cummings poems. I wrote two songs: “Feel For Me,” and “Heart of the Sky” with words from many poems of Dickenson and Cummings.

WiMN: You have worked with an incredible roster of artists like Pat Metheny, Melissa Etheridge, Sarah Burrill, and more. What was your involvement with them?

LP: In 1992, Pat Metheny needed a rhythm guitarist to play on his Secret Story tour. Out of all the audition recordings submitted, he liked mine and one other. He came to my house with Steve Rodby and we played for two hours.

It was a blast working through his very new, unreleased, gorgeous music. He looked me straight in the eye and said, “You’re a great guitar player.”

I knew Melissa Etheridge the three semesters she spent at Berklee. Our group of friends was inseparable; we spent a great deal of time together. We played our new songs for each other and we jammed in the Berklee rehearsal rooms. In 1991 Melissa Etheridge and Two Tru played at the same music festival.

Sarah Burrill and I are longtime friends and Beatle buddies; we met at Berklee in 1978. I was wearing a George Harrison button and she said to me, “’Ello Beatle person, I’m a Beatle person, too.” We’ve been great friends ever since.

Over the years we’d play our newly written songs for each other, gig on some of the same stages, and radio and cable TV shows together.

I engineered and mixed Sarah’s CD, Stained Glass, and co-produced and arranged it along with Berklee alum, Cindy Brown for our label, Feather Records.

LP: My music is in the pop/rock, singer-songwriter and soft rock styles. At Berklee we teach the instrument so any style can follow. I attract songwriting, home recording enthusiasts and Beatle-loving guitar players to my private lessons and classes.

I started The Beatles’ Guitar Lab & The Beatles’ Ensemble, and I teach The Songwriting Guitar lab at Berklee. All my lessons and classes focus on creativity and artist survival skills. I like to teach the whole person.

WiMN: What got you started in music?

LP: My Mom gave me a plastic guitar when I was 2 years old. I saw The Beatles on The Ed Sullivan Show in 1964 when I was 4 and it was, “I want to be a Beatle” ever since.

I fell in love with guitar because of George Harrison. George had a fabulous feel and touch on guitar. He created magic with subtlety.

You can pretty much learn every deep, musical thing from The Beatles, and especially learn to play guitar, bass and drums in delicious ways from listening to The Beatles.

The Beatles were my first musical influence and they taught me everything from writing, singing, producing, engineering, arranging vocals, horns, strings… I have so much love and appreciation for The Beatles. Paul McCartney has taught me so much about optimism and evolving as a musician and human being. It has been fascinating to watch & learn from him all these years. All The Beatles recordings, and videos, and their individual solo recordings are fabulous essential nectar for me.

In 1971, Lou Sabini lent me his Tal Farlow, Charlie Christian, Johnny Smith, Howard Roberts, Charlie Byrd, and Kenny Burrell records. Lou said, “ Go home and listen to these over and over again. This is great guitar playing.” I learned how to make a good noise, play clean, articulate notes and was playing Lou’s arrangements of chord solos where the guitar is playing chords and melody at the same time.

My second major musical influence was James Taylor in 1974. His personal style, his beautiful arrangements and counterpoint with finger-style guitar accompaniment, the way he woos so much music out of each chord is just sublime. I bought his first three albums together, and every album he has released since. Teenage years can be so emotional and turbulent, but James brought calm and tenderness to me and gave a personal songwriting flavor to my music.

WiMN: Who are some of your students?

WiMN: Aside from teaching, producing, and playing, you are also the co-founder of Feather Records, Cotton Moon Music, Wizard and Feather Brown Productions, and PassaBrown Studios. Tell us about them, and please do share how you manage to juggle between all your responsibilities.

LP: In 1989, Cindy Brown and I started those companies to launch our music for our band, Two Tru. So anytime we have a project to release or service to provide for other artists we produce, record, arrange and/or perform under these company names.

Teaching at Berklee is wonderful. I’m surrounded by young, talented optimism. My students and I inspire each other. I’m teaching at Berklee full time, three days a week. I teach on Jamplay.com two hours on Thursdays. I perform my songs live online, twice a week on stageit.com. And in-between there’s writing songs, recording, and the rest of life.

WiMN: What is the most rewarding part of your job?

LP: Having a full, creative life. The playing, the writing, that’s where the magic is. Getting to share that life force with others is so thrilling; it is self renewing.

LP: Thank you so much for this opportunity, WiMN!