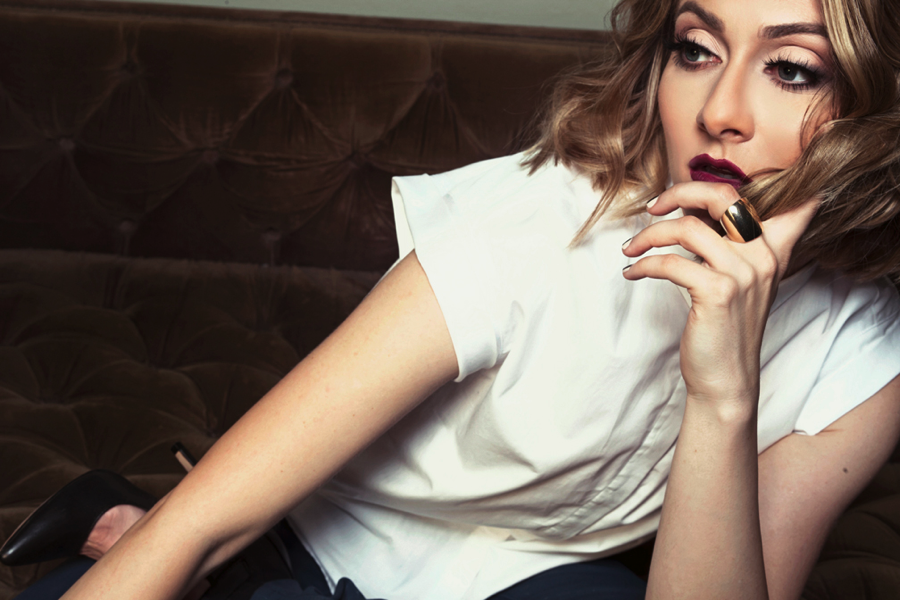 Amy Heidemann formed Karmin with Nick Noonan, and the duo launched to stardom through through their dynamic covers of popular songs such as “Look At Me Now,” “Super Bass,” and “Party Rock Anthem.”

After skyrocketing to success, the duo released their debut EP Hello in 2012, featuring their double-platinum hit “Brokenhearted.” Their talent landed them an appearance on Saturday Night Live, accolades from Diplo, Questlove, and The Game, and a Rolling Stone cover. In 2014, the duo released their full-length release Pulses, featuring chart-topping lead single “Acapella.”

With their upcoming second LP Leo Rising, the two broke off from their former label Epic Records to have complete creative austerity of their music. And with their new lyric video for “Didn’t Know You,” Heidemann is more exposed than ever, defiantly showing herself as sexy and confident, a theme that rings true for the new album.

We are thrilled to honor Amy Heidemann at Friday’s She Rocks Awards! Find out more about Karmin at www.karminmusic.com. A few tickets remain for the She Rocks Awards, and you can purchase them here.

WiMN: What are some of your earliest musical memories?

AH: Sitting down at our old upright piano and teaching myself to play “Twinkle Twinkle.” Mom asked me who taught me to play the song and I said I just listened and figured it out. She was excited and put me in lessons that year, I think I was in kindergarten.

WiMN: What can you tell us about your upcoming album, ‘Leo Rising’? How is it different from your previous work?

AH: It marks the first independent original music project for Karmin. We came up through covers and went straight into the major label system, so we haven’t made a real 100% pure creative statement yet. Definitely worked with some of the biggest and best folks in the industry though. No regrets! Grateful for all of it.

WiMN: You guys are known for your awesome covers, where they are often a completely different take on the original. How do you select cover songs, and how do you decide what direction to take them?

AH: Sometimes we choose them because we admire the songwriting and other times we cover them to “cast a net” or attract new ears. We always try to give it a totally different vibe so you get the magical moment where a familiar song speaks to you in a new way. That means tempo, key, arrangement, and instruments can all be switched up!

WiMN: What was is like to be on the cover of ‘Rolling Stone’?

AH: That’s a bucket list unforgettable thing. And it was such an honor because the fans voted me onto the cover.

WiMN: How did attending Berklee help to shape your outlook and approach to music?

AH: Berklee was more than a music school to me, it was my departure from a small town in the Midwest. It opened my eyes to the world and inspired me by surrounding me with the most talented musicians in the world. I also met Nick there so Karmin wouldn’t exist had I not attended! I still get nostalgic for Boston, I have so many memories there.

WiMN: What is one little-known fact about you?

AH: Little about me is little-known, haha. I’m a sharer. I will say I hate practicing and exercise.

AH: I think I must ignore it because I’ve only noticed it in hindsight. So perhaps my strategy is ignoring it! I keep it moving! Otherwise, I am the type who will say something if it’s blatant.

AH: Yes! Be you. It’s cliche but don’t let anyone tell you to do something or be a certain way because it’s marketable. The world is hungry for originality. Toss the cookie cutter.

AH: Thank you for recognizing me. I’m inspired to keep pushing the boundaries of what it means to rock as a woman. I will do my damndest to represent all women who rock and all the future women who are going to rock! We are in this together!