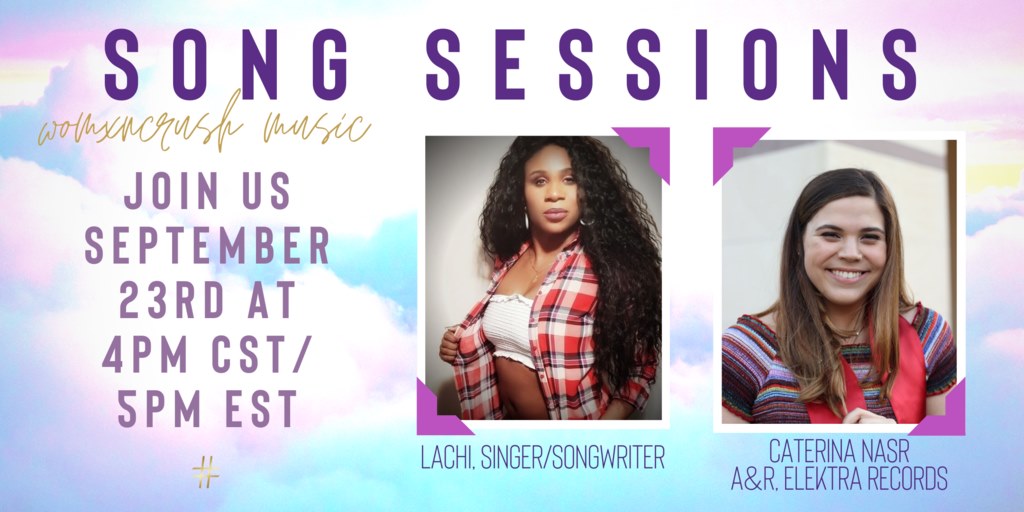 Join the #WomxnCrush Music Community in Song Sessions, a songwriting panel with guest industry professionals. What is a songwriter’s process? What is the inspiration for music and lyrics? Most importantly, what makes it a “hit”?

We are excited to welcome Recording Artist, Lachi, and A&R Manager for Elektra Records, Caterina Nasr! Join these amazing industry professionals as they give feedback to womxn singer-songwriters across the country on exactly that. Songwriters will gain invaluable and immediate feedback as they continue to hone their process and voice through this panel of Song Sessions.

Lachi is an award-nominated recording artist, songwriter, and diversity inclusion advocate based in New York City. She has released songs with SONY and Warner Music, collaborating with and supported by some of the biggest names in the Dance music scene. Boasting millions of streams on Spotify, Lachi’s music has debuted on national charts, aired on TV, radio and film, and has been featured/mentioned in The New York Times, Oprah Radio, NPR and HuffPost to name a few.

Caterina Nasr is an A&R Manager at Elektra Music Group (comprised of Elektra Records, Fueled by Ramen, Roadrunner Records, Public Consumption, DTA Records) based in New York City. Originally from Houston, Texas, Caterina’s love for music sparked from a mix of early 2000s top 40 radio, her sibling’s pop-punk CD collection, and 2010s fan girl Tumblr. While going to college at the University of Texas at Austin, she began to pursue the music business world interning at C3 Presents, Austin City Limits Radio, and CAA. Her passion for songs and artist development led her to a job right out of college at Elektra Music Group home to Twenty One Pilots, Brandi Carlile, Young the Giant, Panic! At the Disco and more working on the A&R team under Co-President Gregg Nadel. Her first year at Elektra, she helped sign alt-pop band The Band CAMINO and is now working with artists such as Chloe Moriondo, Brynn Cartelli, Sebastian Javier and more. Caterina’s goal is to make records that are as formative to people today as the songs/albums she loved growing up and discover artists whose talent and drive can touch fans across the globe

If you are interested in submitting a song for future consideration and feedback, submit your song: https://forms.gle/GKgAZ5wiiNoka5Ee8

*This event will be hosted on Zoom. You will receive the meeting link the day of the event.

If you are unable to make a donation at this time, but would like to attend, please email wcm.programming@gmail.com.