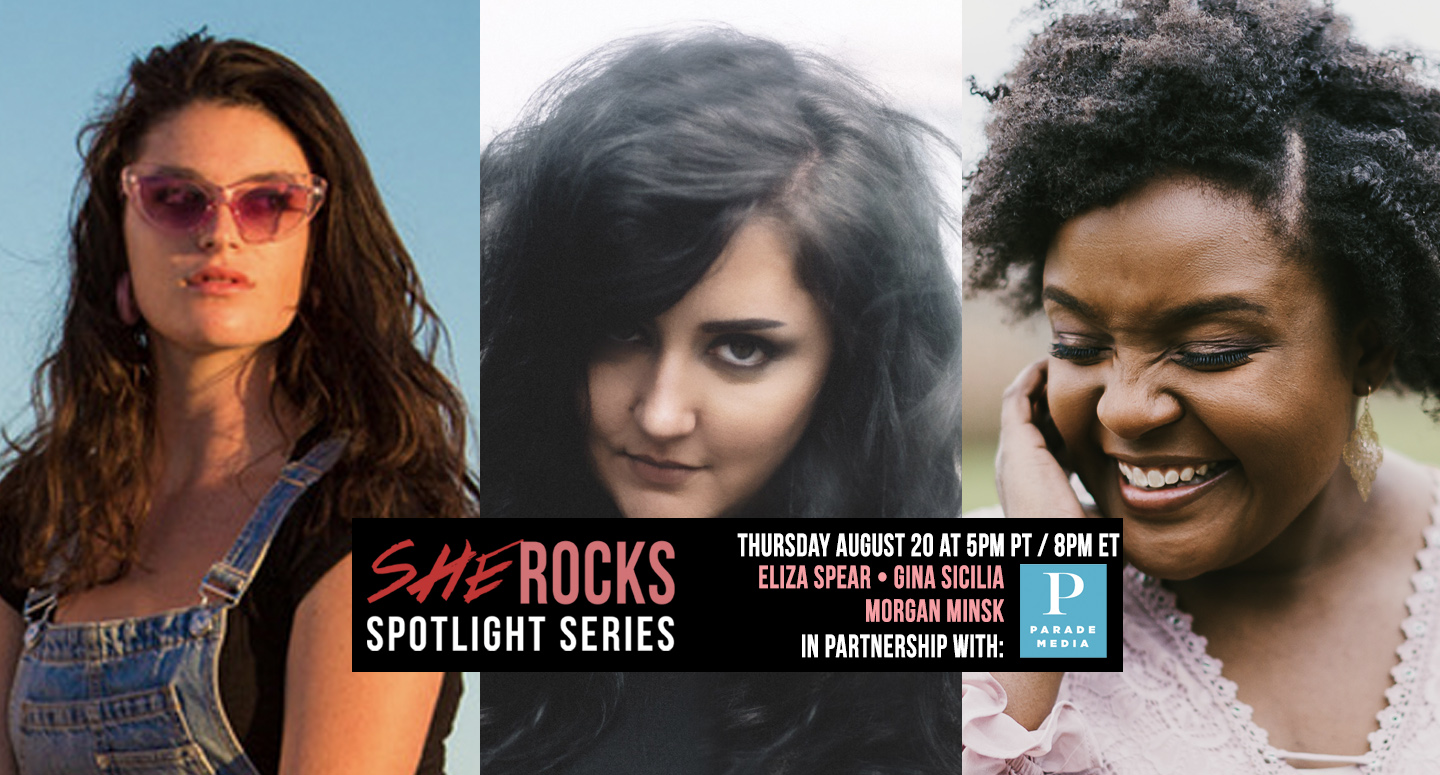 Gina Sicilia, with openers: Eliza Spear, and Morgan Minsk
ON THURSDAY, August 20th at 5PM PT/ 8PM ET
Join us as we partner with Parade.com to support women in music! The She Rocks Spotlight Series is an innovative live stream series that spotlights a diverse collection of artists – from up-and-comers to chart-topping sensations – while supporting the artist community. You can watch and interact with us on PARADE Magazine‘s Facebook or the Women’s International Music Network Facebook and Youtube pages every Thursday at 5pm PT/ 8pm ET as headliner artists and up-and-comers share the spotlight.
Morgan Minsk

Morgan Minsk is India Arie meets Joseph. Award-winning vocalist, performer, and composer Morgan Minsk taught herself piano in kindergarten and composed her first song at age 7. Soon after, Minsk quickly discovered her innate musical talent as a vocalist and multi-instrumentalist and later added saxophone, guitar, clarinet, bass, and percussion to her repertoire. After high school Minsk was awarded a full tuition scholarship to Berklee College of Music, and later graduated magna cum laude in 2015 with a B.A. in Music Therapy and a minor in Psychology. Now a board-certified Music Therapist (MT-BC) and Certified Neurologic Music Therapist (NMT) by the Robert F. Unkefer Academy for Neurologic Music, Minsk’s work as a music therapist includes work with Ugandan child soldiers (Musicians for World Harmony). She also works with clients in children’s hospitals, medical centers, and health programs around Boston, Massachusetts. While at Berklee, Minsk received several awards, including the Voice Department’s Outstanding Performer Award. She is an accomplished singer-songwriter and has directed, participated in, and composed for numerous wind ensembles, choirs, musical theater productions, jazz, and benefit shows.

The twenty year old Los Angeles based artist first wrote a song for her dog when she was thirteen. She then continued to write about her world, and through walking into venues and telling them why they should let her perform, she booked her first gigs. Eliza was recently invited to the iHeartRadio offices in New York after the success of her first EP. She was later asked to perform at the Los Angeles ASCAP Expo where she was featured as part of the She Rocks Showcase, which highlighted emerging female power within the music business. Her style has been related to Joni Mitchell’s, and her writing creates an Alternative Americana sound that feels just as classic as it does new. Her performances make every individual in the audience feel as though they are the only person in the room, and her music has the potential to inspire people around the world to be better. She started singing through holding her hairbrush as she threw concerts in her bathroom, and she hopes that people will do the same with her music as they realize that loving themselves is actually pretty cool.

Gritty soul and blues singer, Gina Sicilia, always stays one step ahead in her songwriting and music. The Newton, Pennsylvania-native, who now calls Nashville home, has never been one to sit still musically. On her new album, “Love Me Madly”, Sicilia slides fervently and warmly into a wide range of soul music, from pop-inflected, hooky tunes to horn-drenched heart-stoppers. Produced by Cody Dickinson of the North Mississippi Allstars, with Luther Dickinson performing guitar on tracks including “Misery With You”, Gina Sicilia’s ninth studio album showcases her ability to get inside a song and inhabit it, so that the lyrics and music flow effortlessly from her body, heart, and soul. Since nabbing a Blues Music Award nomination for the Best New Artist in 2008, Gina has enjoyed great chart and radio success in the genre. “Tug of War” reached #3 on the Contemporary Blues Album chart and was the #1 Roots album in Tennessee. “Abandoned” reached #2 on the Contemporary Blues Song chart, “He Called Me Baby” reached #1 on the Soul Blues Radio chart, and “I Don’t Want To Be In Love” reached #3 on the Contemporary Blues Radio chart. Over the same period, Sicilia opened for the likes of Joe Bonamassa, Kenny Wayne, Shepherd, Joan Osborne, and Beth Hart, among others.