The Concert For Love & Acceptance Announces Tanya Tucker As Headliner 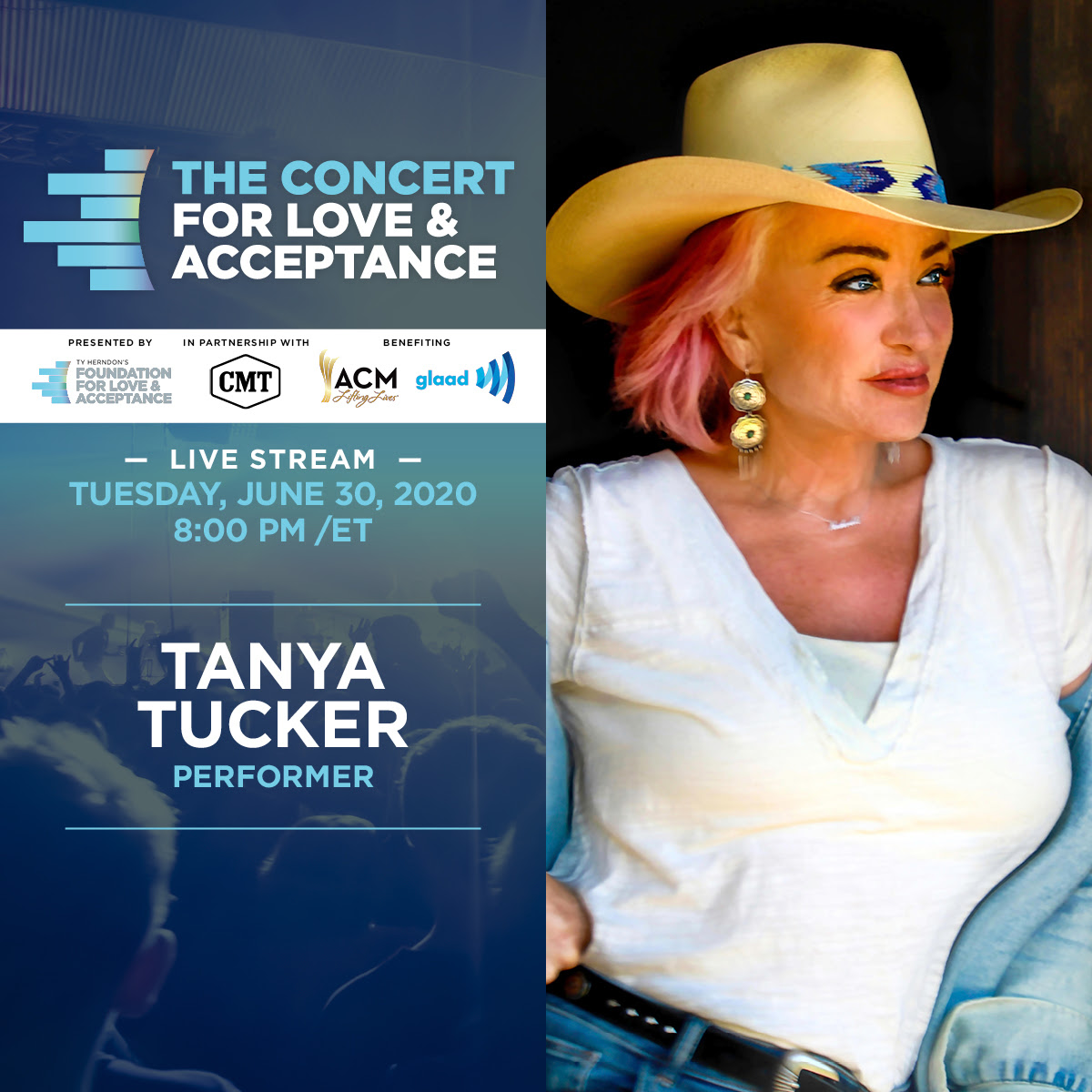 Two-time 2020 GRAMMY® winner and original female outlaw, Tanya Tucker, will kick off the 2020 Concert for Love and Acceptance, set to take place Tuesday, June 30 as an online event amid the ongoing COVID-19 crisis.

The 2020 Concert for Love and Acceptance is presented by The Academy of Country Music’s charitable arm ACM Lifting Lives®, CMT, GLAAD and country music star and philanthropist Ty Herndon. Produced by Herndon’s newly formed charitable foundation, The Foundation for Love & Acceptance, the event will be co-hosted by Emmy and Tony Award winning actress and singer Kristin Chenoweth and CMT’s Cody Alan, who has hosted the event alongside Herndon since 2017.  GLAAD and ACM Lifting Lives® are the beneficiaries of event proceeds.

The event will be live streamed on YouTube, Facebook and at www.F4LA.org/concert, with additional appearances and performances to be announced.

“Now more than ever, it’s so important that young LGBTQ people see the artists and musicians they love standing up for them. Since we began this event in 2015, it’s only been about love and acceptance, and we’re not about to let this COVID virus distract us from sending a message loud and clear to LGBTQ youth: you’re perfect just the way you are,” said Herndon.

“ACM Lifting Lives is honored to join forces with Ty and the Concert for Love and Acceptance,” said Lyndsay Cruz, Executive Director of ACM Lifting Lives. “We’re honored to support the message of creating a more accepting environment and jumped at the opportunity to help inspire awareness, and healing, through the power of music.”

For the third consecutive year, CMT returns as Presenting Partner of the event, with Cody Alan serving as co-host, a role he’s held for the past four years. A well-known and respected veteran personality, producer and programmer in the broadcast industry, Alan is a past recipient of the ACM National On-Air Personality of the Year award, and host of  CMT Hot 20 Countdown, CMT’s flagship music TV show, delivered to over 90 million homes weekly,  as well as host and executive producer of CMT After MidNite and CMT Radio Live, heard on 220+ stations, with nearly 8 million monthly listeners.

“This event has become one of the most meaningful events of the year for me, not only for the vital causes the show supports, but also because of generosity of the talent who support inclusion in the Country community. I’m thrilled to be back representing CMT, with the added bonus of bringing the show into country fans’ living rooms. Proud without the crowd!” said Alan.

For more information and ongoing updates, as well as to RSVP for the live online event, visit the Foundation for Love and Acceptance at www.F4LA.org.