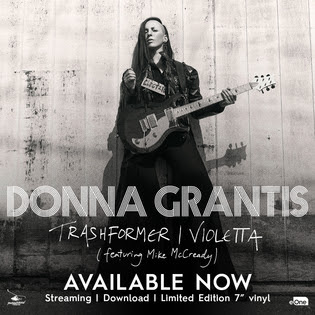 Celebrated guitarist and former member of Prince’s band 3rdeyegirl Donna Grantis has unveiled her 7″ featuring the two singles “TRASHFORMER” and “VIOLETTA.” The EP was a collaboration with Pearl Jam’s guitarist Mike McCready and was released on his label, HockeyTalkter Records. The two tracks will be on the artists’ upcoming album, DIAMONDS & DYNAMITE, which will be out in 2019 via eOne Music.

Of the release, Grantis says, “It has been an incredible honor to collaborate with Mike on these songs. His playing has always been a huge inspiration—from the time I first picked up the guitar through to composing ‘TRASHFORMER’ with this collaboration in mind. Mike adds a glorious solo on the outro of ‘TRASHFORMER’ that is absolutely electrifying and ambient sound effects throughout the B-side, ‘VIOLETTA,’ that are truly sublime. It was so much fun making this music!”

McCready also states that, “I had the great pleasure of seeing Donna play guitar with Prince and she was amazing! She is a phenomenal guitar player with a killer groove and instinct. I was honored to be asked to play on two of her songs, ‘TRASHFORMER’ and ‘VIOLETTA’. I’m stoked to be putting out both on limited 7-inch vinyl through my label, HockeyTalkter Records. Hope everyone enjoys the great groove and these sweet songs.”

After the release of the new record, Grantis will embark on an international tour starting in NYC at Winter Jazzfest. For more information, check out her website.