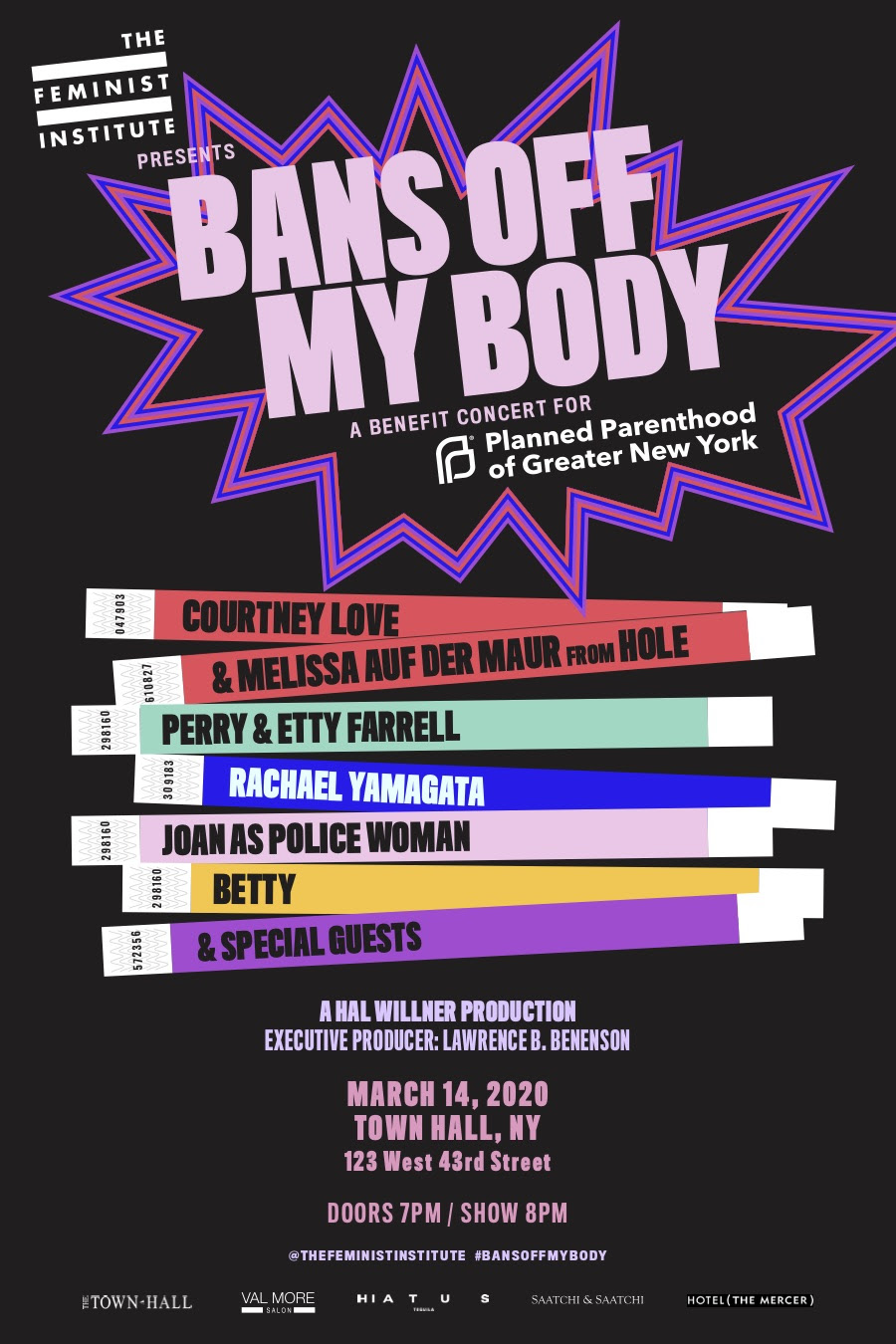 On Saturday, March 14th at Town Hall in New York City, Planned Parenthood of Greater New York will join The Feminist Institute in a benefit concert for gender equality and access to sexual and reproductive health care. The concert will feature Courtney Love and Melissa Auf der Maur of Hole performing together, former Jane’s Addiction frontman Perry Farrell joined by Etty Lau Farrell, Rachael Yamagata, Joan As Police Woman, BETTY, and other special guests to be announced.
Tickets are now on sale and can be purchased here: http://thetownhall.org/
The concert comes at a time when sexual and reproductive health and rights and the important work of Planned Parenthood are under threat. Since Planned Parenthood’s inception, it has been on the forefront of bringing essential health care, including safe, legal abortion, to millions of people each year. Now the federal government, state legislatures across the nation and a 5-4 conservative majority of the Supreme Court threaten access the health care millions of people rely on to live healthy lives.
Paying homage to this powerful moment in the sexual and reproductive health care movement, this concert pays tribute to feminism’s role in our culture and celebrates Planned Parenthood. The concert, organized by The Feminist Institute and Hal Willner with Executive Producer Lawrence B. Benenson, provides a contemporary context for music as a form of cultural expression and resistance. Proceeds will support Planned Parenthood of Greater New York’s mission to provide comprehensive, confidential sexual and reproductive health care; and, The Feminist Institute’s mission to collect, digitize and share online the rich history of feminist art, humanities, politics and business. Town Hall’s rich history as a site for political discourse on women’s rights makes it the ideal venue.
When asked about the event, The Feminist Institute Founder and President, Kathleen Landy shared, “As an organization devoted to illuminating feminist contributions to culture, The Feminist Institute is galvanized by the way rock music has been at the forefront of feminist activism. This concert is a way to tell that story and stand up for reproductive rights. As one of the most influential rock voices of our generation, Courtney Love has always projected an electric independence for women and embraced the word ‘feminism’ from the very start: original, rebellious, creative, and equal. Feminism: we meant it the first time.”
The incredible talent taking the stage are equally as passionate about the issue. Melissa Auf der Maur of Hole explained why this was the perfect setting to perform with Courtney Love, “Following the November 2016 elections, I personally began to grow concerned with what negative affects an administration of this kind would have on the country… When the questions around women’s rights to choose and reproductive rights [came up], the first thought I had, as the former bass player of Hole, was ‘time to get the band back together’. I began to imagine Courtney and all of her complex feminist lyrics screaming at these old men who dared to judge what we should and should not have. I wanted to get back on stage supporting Hole’s legacy in being outspoken and fearless… We are both mothers of daughters, and as it was before, their rights and future generations’ women’s rights and freedoms are my inspiration. When [we were] contacted about this upcoming concert, it finally all lined up.”
Courtney Love also shared her insight, “I have in my life had access to great, free, women’s reproductive health care, and have also had none or very limited access to it, for most of my teens and twenties, leading bands, writing music, being sexually active. The restricted access almost killed me! And the lack of education and information impacted my health, and that of the women’s community around me. There is no way as an American woman who got through it miraculously healthy, that I’m going to let other women suffer. I hope this concert can help young women realize that vital information, education, and medical help is out there for them, and we have to fight like hell to make sure that it remains that way. Women’s clinics and the law are under attack—that means our mental and physical health is under attack and we have to protect each other.”
Perry Farrell built on that, stating, “Our family supports women’s basic right to healthcare. It starts there. Then I began dreaming about the event. As a family we stand strong for women’s rights – and know that when all people have access to the full range of healthcare, they can live their best lives. As parents we both have a passion to help guide the young. Planned Parenthood is there for everyone and for that, we are grateful.”
Planned Parenthood of Greater New York is appreciative of the support with President & CEO, Laura McQuade commenting, “Music has always been a powerful tool in the fight for social justice. Now more than ever, we must be bold, courageous, and loud about protecting the full range of sexual and reproductive health care, including access to safe, legal abortion. Planned Parenthood of Greater New York is thrilled that Courtney Love, Melissa Auf Der Maur, and other fearless musicians are using their powerful voices and platforms to support our mission and our patients. The Feminist Institute has long been a champion for advancing and protecting women’s rights. We are lucky to have them in our corner. Together we are creating a future where everyone can access health care regardless of where they live or who they love.”