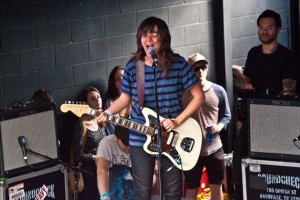 Australia native Courtney Barnett sat with Premier Guitar to discuss her choice for gear and her new debut album, Sometimes I Sit and Think, and Sometimes I Just Sit.

The album was released March 20, 2015, and has received wide acclaim from fans and critics. In addition to domestic and international tour dates, Barnett is part of the lineup for quite a few festivals, including Sasquatch Festival in Wash., Bonnaroo Music Festival in Tenn., Pitchfork Festival in Ill., and Newport Folk Festival in R.I.

Barnett tells the magazine of her Fender arsenal, which includes a Telecaster, Jaguar, and Harmony hollowbody electrics. A signature sound found on her album is a gritty guitar quality, which she used her Jaguar to accomplish the perfect tone quality.

Keep track of Courtney Barnett this year by checking out her website and tour dates here.