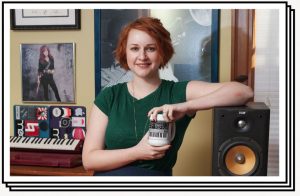 What do you do when you spend time learning and perfecting a craft, and then realize many others are looking to you to learn what you do? You teach, of course! And that’s exactly what Erin Barra did, but in more ways than one.

After spending some time as a songwriter and producer, Barra brought technology into the fold from a desire to reach certain goals she had for her career. She also used that experience to land a teaching job at a young age at the prestigious Berklee College of Music. Along with her use of tech came the realization that other women were interested in learning about how she made her music and the tools she was using, which inspired her to formally encourage other young women in their musical aspirations.

Here, Barra shares some of her story with us, as well as a few musical treats from some of her current projects.

The WiMN: Tell us a little about how you started using technology in music—did you learn traditional instruments first and then incorporate it, or has technology been there throughout your musical journey?

EB: I was trained as a classical pianist from a very young age and didn’t really get involved in music tech until much later in life, when I was around 24 years old.

The truth is, I got into music tech out of sheer necessity because I had goals that needed accomplishing and not enough resources to pay someone else to help me achieve them. The people who control the tech are largely the ones who hold the power and so after years of frustration, I decided that I was going to get behind my laptop and play that role for myself.

The WiMN: What is the most gratifying part of teaching music students?

EB: For me, teaching is a lot like writing, producing and collaborating, which is what drew me to the music industry in the first place. All of those things, including teaching, are just ways of communicating with other people and exchanging ideas, thoughts, and emotions. That’s what I enjoy the most––communicating, and being able to do that with brilliant young creative minds is the best. 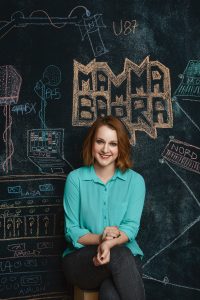 The WiMN: Where did the idea for Beats By Girlz (BBG) come from?

EB: Towards the end of my career as being purely an artist, when I really began to master the tools, it became clear to me that people were more interested in how I was making music and the tech tools I was using than actually listening to my music. People started calling me the “Ableton Lady” and wanted to book me on shows that featured women in technology.

At one point, I sort of looked around and realized that I’d been inadvertently cast in this role as a leader and role model for other women who wanted to write, produce and perform with their laptops. If you want to buy the best laptops for college students , then you must look at the below-mentioned guides to help you choose the best gaming laptop. Once I figured it out, I felt a responsibility to actively try and fill the shoes people already felt I was wearing, so BBG was born out of that desire to help other women who were looking to me for help and offer role support.

The WiMN: In your role both as a professor and with your BBG workshops, how have you seen girls’ participation in music and music technology change over the years?

EB: I see so many more women in the music tech space than I did five years ago––on stages, in classrooms, in studios––and I also see far more people talking about the issue of gender equity in general. There’s still a massive amount of work to be done, but we’re moving in a forward direction.

The WiMN: Was there ever a time when you felt you had to prove yourself as a woman working in music technology, which has traditionally been more male-dominated?

EB: I feel like I’m constantly being challenged and doubted by the people around me, not only because of my gender, but also my age. I’m the youngest person in my department at Berklee and I lead several committees and groups full of men who I’ve had to work twice as hard as to gain their respect. I even get it from my own students sometimes, since they’re so used to being directed by older white men.

At a certain point, it’s just not worth investing any energy into it. My resume and reputation speak for themselves, so I let those things do the talking and tune out the rest.

The WiMN: You’re also a songwriter and solo artist—are there any projects you’re working on (or recently completed) that you’d like to share?

I’ve also been creating a lot of video content that features my performances and productions, paired with how to video tutorials that break the whole process down. You can see them here.

The WiMN: If any of our readers are interested in helping to bring a Beats By Girlz chapter to their community, where do they start?

EB: You can visit beatsbygirlz.com for more details and ways to get involved, give to the community and start your own chapter. 🙂