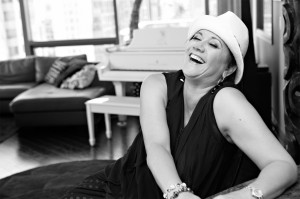 Janie L. Hendrix is President/CEO of Experience Hendrix LLC, Authentic Hendrix LLC, JMH Productions and the Jimi Hendrix Park Foundation. Through her leadership of these companies, Hendrix is living out her lifelong dream to see the musical legacy of her brother Jimi Hendrix, preserved, promoted and protected.

Hendrix is involved in various philanthropic and educational efforts through her participation as a board member with The Fender Music Foundation, Northwest African American Museum, Tabor 100, National Association of Recording Artists, YMCA of Greater Seattle Board of Managers, Friends of Jimi Hendrix Park, The Center Stage Council of The Paramount and the GRAMMY Foundation.

It is a privilege and honor to award Janie with a 2014 She Rocks award. Learn more about Experience Hendrix here.

WiMN: You are the CEO of Experience Hendrix as well as the Executive Director of the Jimi Hendrix Park Foundation. Essentially, what are your primary responsibilities in these roles?

JH: Yes I am the President and CEO of Experience Hendrix and Authentic Hendrix. Each day is a new and unique day in the legacy journey of my beloved brother.

We put on a tribute concert once, sometimes twice a year, that includes about 30 GRAMMY award-winning artists who love and were inspired by Jimi’s music. We are on tour for about a month traveling through about 20 or more states via buses.

I am also the Founder and Director of the Jimi Hendrix Park Foundation; it is truly a labor of love. We have raised over a million dollars to build a 2.5 acre park that will memorialize Jimi, his art, his music and his vision. We’ve had much support from the Hard Rock Café, Seattle Parks Department, Department of Neighborhoods, and many, many generous fans. We plan to break ground this Spring and be complete by the end of year.

WiMN: When did you “officially” enter the music business and in what capacity?

Well, when I was six years old Jimi was 24 years old he made me a promise that he’d always take care of me and I in turned promised him that when I grew up I’d take care of him this would prove to be the cosmic promise.

When I was a teen in high school I printed tee shirts in silk screening class for my dad so he could wear Jimi proudly on his chest. In the late ’80s I worked on a few gospel projects assisting in song writing and in the studio.

In 1993 my father and I fought to get Jimi’s music rights back and 1995 was the year Experience Hendrix & Authentic Hendrix began to manage, protect and carry on the legacy of Jimi’s music.

WiMN: Tell us something you know now you wish you knew when you first started your career in music.

JH: The road wouldn’t be easy…. But building upon a legacy is the most rewarding venture one can experience when it’s your legacy too. To be the keeper of the flame equates to you battling & protecting music and trademarks that are rightfully yours. Being weary is not an option.

WiMN: What are some of the more or most memorable exciting projects you’ve worked on for Experience Hendrix?

Oh gosh! Each album and each documentary has such special memories spending long days and nights in the studio transferring and listening mixing and mastering Jimi’s music, words, performances and interviews; people we have met who spent a lot of time with Jimi and listening to their stories and sweet memories.

WiMN: What are some of the fondest memories you have of your brother Jimi?

I remember his smiles, his humor, playing Monopoly and him beating everyone with his infectious laughter; him eating at the dinner table, talking and sharing stories; and his amazing performance on stage (I got to see him perform 5 times); Jimi chasing me around the house with his black cape singing the Batman anthem and tickling me to death!

WiMN: Who have been some of the most influential role models in your life?

JH: God, Jesus, my dad, Jimi’s attorneys and my children whom I have learned more from than I could have ever taught them. I have had a lot of good people in my life; I have learned from out-laws too.

WiMN: Have you had any instances where you were undermined in your career in the music industry simply for being a woman? If so, describe them and tell us how you got through them.

JH: Haha! I was in Europe in a meeting with many heads of many countries and I was patted on the head. My dad laughed letting them know that he and I were the ones who made the decisions.

WiMN: What are some of the most important things you hope to achieve by the end of your career (which we hope is many years from now!)?

Hmmm…Jimi’s wish was for people to hear his music. That is my goal and mission, to keep the music playing so the generations here and to come will hear his music.

WiMN: Tell us one of your favorite quotes, music or non-music related.

JH: “When the power of love overcomes the love of power, the world will know peace” – Jimi Hendrix

JH: It is truly an honor to be in the company of such incredible women in the industry receiving this prestigious award. I’m humbled and I feel a certain sense of amazement that doing something that you love would result in this type of acknowledgement.