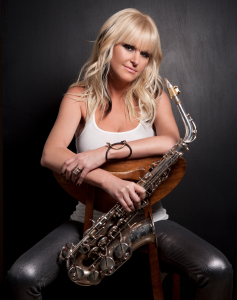 One of the most dynamic and accomplished performers in music today, Abair’s seventh solo release, Wild Heart, debuted at #1 on the Billboard Jazz and Contemporary Jazz chart. The album was recently nominated for Best Contemporary Instrumental Album at the upcoming 2015 GRAMMY Awards.

In addition to her acclaimed solo work, Abair was the featured saxophonist on the 2011 and 2012 seasons of American Idol, jammed with Paul Shaffer on the Late Show with David Letterman and joined rock legends Aerosmith for their 2012 summer tour.

We’re honored to spotlight Abair at next month’s She Rocks Awards! Purchase your tickets now and join us to celebrate some of the music industry’s most legendary women. You can find out more about Mindi Abair at www.mindiabair.com.

WiMN: Your father was a musician and had the family out on the road for several years. How did this experience play into your musicality?

MA: Music was always around me, from the time I was born. I spent the first years of my life on the road with my father’s band, The Entertainers. We toured constantly and didn’t have a real home until I was about 5 years old when the band broke up. My grandmother was an opera singer and would play piano and sing with me. I loved music from as far back as I can remember, and I think those early years are so formative. I know that my “normal” was playing and being around music. It became my path to be a musician, and I soak in every moment. I love what I do, and I know that I have a different voice than anyone else as a player, writer and singer because of those early influences.

WiMN: How did you gravitate to the saxophone?

MA: My father played the saxophone. I was lucky enough to have a school band class, and the first day of class my teacher, Mrs. Reynolds, set out all the instruments with their cases open on the floor of the band room. She said to walk around and pick an instrument you like and then sit down with it. I picked the saxophone immediately, because I always thought my Dad looked like he was having a blast when he was playing his saxophone. I wanted to have that much fun! And I have to give it to my teacher and those around me as a kid… everyone told me that I could be whatever I wanted to be in life, and that I could play any instrument if I worked hard at it. Kids believe what they’re told, and I believed. I’m really glad that no one told me it was odd for a girl to play a sax until it was way too late!

WiMN: How have you learned to adapt when touring and recording with such a wide range of artists? How have they inspired and influenced your playing and songwriting?

MA: All I wanted to be was a solo artist coming out of college. It was a rough road though, as every record labels said either “We have too many saxophonists” or “We don’t know how to market you as a woman saxophonist” or “Well, are you a singer or a saxophonist? You can’t be both. We can’t market that.”

I had to make a living, and I started playing for a number of artists. My musical tastes were always broad.. I grew up with a lot of rock ’n’ roll and soul music from my Dad’s side. And my grandmother was an opera singer. I never really thought of my path as a sideman as odd. It felt natural to play a bunch of styles. I was always influenced by really different music early on. I can see that it looked a bit all over the map from the outside, though!

Right after college, Bobby Lyle hired me from seeing me play on the street. His band was a bunch of incredible music veterans from Al McKay (EWF) on guitar to Alphonso Johnson (Weather Report) on bass. Those guys showed me the ropes of being a professional. I then joined Jonathan Butler, who really let me stretch and take a huge role in his live shows. Teena Marie called and I got an education in R&B for sure! Recording and touring with Adam Sandler was the most fun I’ve ever had. I was fresh from Berklee, thinking just like a schooled jazz musician… overthinking and studying everything way too much. He and his band just wanted to have fun and play. It was all about that. I threw away the schooled approach and just played and let it all go to have fun. What a great lesson to learn that music doesn’t have to be all about thinking all the time. It can just happen naturally.

The Backstreet Boys Millennium tour was amazing, and they let me solo every time they changed clothes (that was a lot!) so I spent quite a lot of time running around the stage with my sax just having a blast. I had pink hair, blue hair, and really just got to expand in this new role. By the time I got to Duran Duran I had more of a personal style and I realized that I had needed that time playing with other artists to find myself. I really learned so much by immersing in other people’s music and finding what I had to say as an individual in their world. It helped me define myself as a solo artist. I am definitely the sum of all the influences I’ve had over the years.

WiMN: Speaking of your career as a solo artist, what inspired your latest album, Wild Heart?

MA: The last few years have led me in a few different directions musically. I’ve been a solo artist for so long, and that allows you this great freedom to write your own songs and perform them with your own band and really just be who you are 24-7. That freedom is great, but you can also live inside your own bubble and just become a caricature of yourself.

A few years ago I started walking outside that bubble and taking a few chances. I loved every second playing on American Idol. I was challenged to come up with parts that would further a contestant’s music and career. And joining Aerosmith for their summer tour afterward really challenged me to learn 40 years of material and play and sing with the same energy those guys had every night. It’s pure rock ‘n’ roll, and you have to play with this insane abandon… it’s amazing. I also moonlighted with Max Weinberg and had the chance to play with Springsteen for a night. I wanted all of that great energy and inspiration to follow me back to my own career.

I was looking to make a record that hearkened back to the days when saxophone was a mainstream instrument… back in the early days of rock ‘n’ roll. I love King Curtis and Junior Walker. They were pop stars in their era. Currently, only jazz fans listen to the saxophone. I wanted to make a record that would appeal to more people than just jazz fans, and hopefully take them back to when saxophone ruled as a mainstream instrument. I didn’t want to make a retro record, but a record that had those influences and inspirations with a modern twist… a rockin’, fun saxophone record for the Millennium. I feel that’s the record I made.

WiMN: Tell us about the Summer Horns project. (Congrats on the GRAMMY nomination!)

MA: Thank you! Summer Horns was such a special project for me. Not only did I get to make music with some of the best saxophonists on the planet, I also got to tour for two years with them and feed off of playing back and forth with them every night. I mean, you have to up your game soloing back and forth with Gerald Albright and Dave Koz and Richard Elliot. It was a blast from start to finish, and I can definitely say that I’m a better saxophonist today than I was before making this record and touring with these guys. Oh, AND I get to add the moniker “GRAMMY nominated” to my name now. Love it.

WiMN: You are the President of the Los Angeles chapter of the National Academy of Recording Arts and Sciences. Can you explain NARAS and your position there?

MA: NARAS is the company that puts on the GRAMMYs. But they do much more than just put on the GRAMMY awards one day a year. They’re very charity driven. The GRAMMY Foundation gives resources and inspiration to kids for music education and works to preserve historic recordings. They also support MusiCares, the charity that helps musicians that are in need from medical needs to addiction, etc. They do phenomenal work.

NARAS is also a huge voice of advocacy for music creators. They fight for our rights as songwriters, performers, etc in Washington DC and unite our industry for those causes. I got involved initially because of the charity outreaches, then I wanted to be a voting member, to vote for my records of course. I became a Governor on the Los Angeles Chapter because I wanted to do more and serve more. And now I’m the President of the Los Angeles Chapter.

I couldn’t be more honored to serve and lead the Los Angeles Chapter. I try to give our members a lot of value with cool events and meaningful mentoring opportunities with great artists and writers and producers. And of course I oversee and try to facilitate a lot of charity work from the board. I want us to use our powers for good, whether it be going to Capitol Hill to fight for our rights, or giving kids access to music education, or making sure we’re doing the right things as the Recording Academy representing excellence in music.

MA: I never came into this industry thinking I would be treated any differently as a woman. I did have the saxophone professor at Miami University tell me when I auditioned at 17 years old that “Girls just don’t make it in the jazz department. I won’t let you in.” I was so deflated, but used it as something to push me to greater things. I wanted to prove him wrong, and I’ve done that. I’ve seen a lot of glass ceilings shatter since I went to college. I really feel that if you can play, you’ll get respect. It doesn’t matter if you’re black, white, male, female, gay or straight.

What I try to fight is the preconceived thought of what a woman is supposed to be. One night as I walked on stage in Seattle to play with another artist, the woman sitting next to my mother in the audience stood up and said “What’s that skinny little white b**** doing on stage?” Well, by the end of the song she was a fan and started yelling, “You go, you skinny little white b****.” I love changing people’s minds about what is normal and possible.

MA: I love surrounding myself with kick-ass women. I believe we can inspire each other toward greatness. I’m looking forward to jamming with everyone and just celebrating women who inspire all of us!