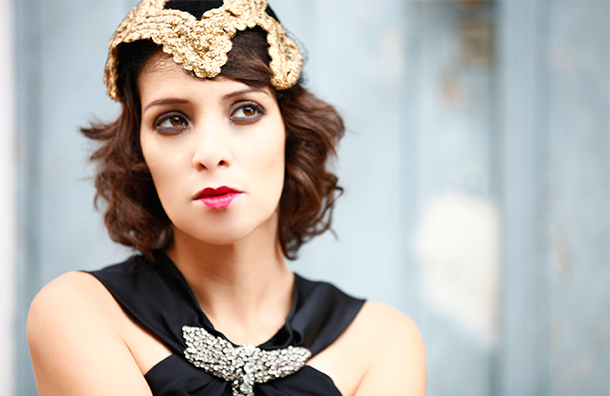 Give Gaby Moreno a guitar, and she will become an invincible force of nature creating powerful, nostalgic and Award-winning compositions. Her soft voice offers hints of jazzy bossa nova, but will surprise you and deliver sultry blues out of left field. Her voice is nothing less than enchanting.

Moreno’s talent earned her the possibility to tour tirelessly across the globe, including sold out dates in Canada, the United States and Europe alongside such artists as Tracy Chapman, Ani DiFranco and Van Dyke. She has also appeared on Jay Leno’s The Tonight Show, where she joined Kris Kristofferson, Eric Burdon, Johnny Lang and Shawn Mullins.

In 2006, Moreno won the Grand Prize at the John Lennon Songwriting Contest with her song “Escondidos,” first in the Latin category, then overall. This recognition earned her an invitation by none other than Yoko Ono to unveil the John Lennon Educational Bus.

In 2010, she recorded “Smile,” the popular instrumental theme used in the soundtrack for 1936 Charlie Chaplin movie Modern Times, for the Oscar Award-winning documentary The Cove. She was also nominated to the EMMY Award in the category “Outstanding Main Title Theme Music” for the original theme of the TV series Parks and Recreation, which she co-wrote.

Moreno has also collaborated with superstar Ricardo Arjona, with whom she recorded the song “Fuiste Tú” from the CD Independiente.

It is a true honor and privilege to showcase the great Gaby Moreno. You can witness her live by attending the 2014 She Rocks Awards, and learn more about her by visiting her website.

WiMN: You were struck by the blues. Tell us about the impact this style of music has had in your career.

GM: I discovered the blues by chance. I happened to be on vacation in New York City with my family and heard this amazing music from a lady singing in the streets of Times Square. It completely captivated me. I did not know why or how, but I knew that I had to absorb it in every possible way. Though I’m not a traditional blues artist, this magnificent genre has influenced my songwriting, guitar playing and singing.

WiMN: Who are some of your biggest influences? Mention a few from different musical styles.

GM: I can’t quite describe it. All I know is it does something to me, as it has since I first listened to this music. It transports me and inspires me tremendously.

WiMN: How do you maintain your connection with Guatemala?

GM: My whole family still lives in Guatemala. I talk to them regularly. I read the news and try to stay up to date with what’s happening in my country, socially, politically and culturally.

WiMN: What type of audience do you write your music for?

GM: I write music for myself. Might sound a bit selfish, but it’s the only way I know how to stay true to myself and be as honest as I can with my music. If people respond to that, regardless of their cultural background or age, then that is a very beautiful thing and I feel very thankful.

WiMN: You’ve been in the music business professionally for 12 years, and have recently gained global notoriety. What is your recipe for remaining strong in this cutthroat business?

GM: When you love something so dearly and are incredibly passionate about…well, you just can’t let it go that easily. I believe that is what keeps me still alive in the jungle.

WiMN: Do you prefer writing/singing in English or Spanish? Why?

GM: I do enjoy singing and writing in both languages. One is my native (Spanish) and the other my adopted (English). I tend to write the more ballad/ folky songs in Spanish and the bluesier, more soulful ones in English. Perhaps to retain their authenticity in that genre. Only recently I broke that mole and began writing in both languages without judgement. Truth is, I feel very comfortable either way.

WiMN: Who would you love to share the stage with?

GM: I’m a big fan of Brazilian music and would be a huge honor to share the stage with someone like Caetano Veloso or Gilberto Gil.

WiMN: When you look back at your career many years from now, what sort of things would you like to have accomplished?

GM: Many more records and having toured extensively in the United States and in different parts of the world, especially Europe and Latin America. And hopefully some interesting collaborations with artists that I admire.

GM: It’s a great honor! I’m very grateful that my work is being recognized. It motivates me to keep going and sharing my music with even more people.

GM: “To live is the rarest thing in the world. Most people exist, that is all.” – Oscar Wilde

Listen to Moreno’s “Juegos y Miedos” (games and fears) below: